This post is about the slink marking, the Sysudoku method of pencil marking.  It explains why this form is far more useful than the keypad system seen in of most Sudoku publications.  This fact is demonstrated here with a historically significant puzzle, composed by Sue de Coq to introduce the candidate elimination method now given that name.

Most Sudoku writers pencil mark candidates in simple list, or with “keypad” positioning in which a digit appears on the cell location it would normally occupy on a pho

The slink (strong link) between candidates that is defined on the Sysudoku Beginner’s page is fundamental to the Sysudoku solving methods, both basic and advanced. Exploiting slinks fully from the beginning is the primary difference between Sysudoku and other systems with which you may be familiar.  Some Sudoku writers ignore the starting process entirely. The helpful ones explain the dublex and crosshatch in one form or another. But in doing so, they rarely include the effects of slinks and aligned triples along with the effects of givens and discovered clues. This is easier on their readers, but following this advice, as you approach advanced solving, where you need all of the candidates, you have fewer clues to use and more candidates left to find.

How about a graphic demonstration of this?  We’ll take a moderately difficult advanced level puzzle by Sue de Coq, from the post announcing the technique named after him. Let’s suppose you are tackling it with no advice but the page or two at the beginning of most puzzle collections. Knowing about candidates, you decide that the first thing to do is to generate all the candidates, and array them in their keypad positions, as you’ve seen in many Sudoku books. The way you do this is to delete from the cell any given number the cell can see in its box, row, or column. I’ll be calling this the number scan, because you run through the numbers mentally to do this. Here’s what you get: 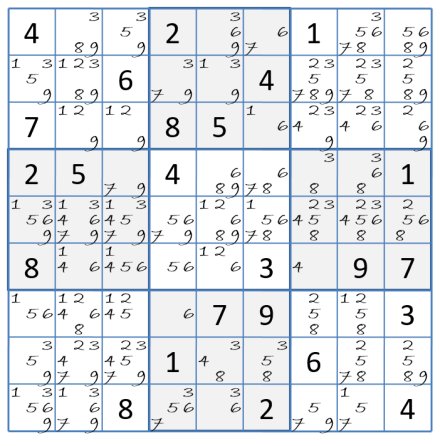 It’s a great demonstration of keypad marking, isn’t it?  This is usually done with smaller pencil marks relative to the cell and the givens, so that the grid looks much less crowded. Aside from a couple of cells with single candidates (naked singles 4r6c7 and 6r7c4), or maybe a hidden single or two, that being the only candidate of a number in a unit (box or line). Its hard to see anything in this distracting horde.

On the other hand, after the next two basic posts on slink marking, you can have this puzzle going into advanced solving looking like this: 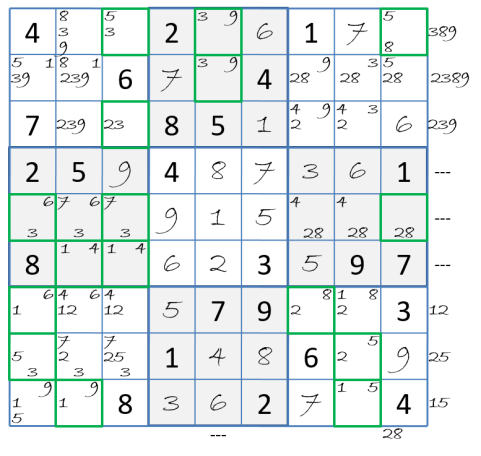 After box marking and line marking, there are a lot more clues,  a lot fewer candidates, and a lot more organization. Box and line slinks are separately marked, and bi-value cells, very important in advanced solving, are bordered in green. 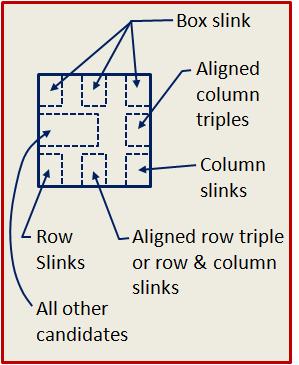 Here is the key cell map that explains why every pencil mark is where it is. Marks for a slink are placed in each partner cell. Marks at the top denote box slinks (two in the box). Row slinks are listed at the bottom left, column slinks at the bottom right. But if a candidate is both a box slink partner and a line slink partner, its box partnership has priority in the placement. Aligned triple marks are on the bottom middle for row alignment, right middle for column alignment. Candidates without partners of any kind are listed at the middle left

As a graduate of the beginner’s page, you are qualified to determine if I have misrepresented any slinks on the grid above. You’ll be doing your own slink marking soon.

The reason many basic solving systems do not take advantage of strong links may be simply for lack of a convenient way to write them on the grid. The advantage is clear in the grid above. The next posts will show you exactly how to achieve it.

In the next one, we walk through box marking of the Sue de Coq classic the original way. A bit later, we do box marking with the slink marking bypass. The bypass is more challenging, but definitely more fun. I’ll have to admit why I do a little of both.