This post demonstrates a systematic  enumeration of subsets in the line marking of the Sue de Coq debut puzzle.  More difficult units are resolved by the scratchpad suset algorithm introduced in the previous post of October 25, 2011.

As we begin listing the single number susets, reaching 7,

we notice that the cells containing 2 also contain 6 and 7.  The combined suset 267/245 describes a locked triple. It is a hidden triple, leading to four removals.

I’ve been using the puzzle SdC 1, from Sue de Coq’s  famous  post, to illustrate various aspects of basic solving.  Now we can go back and include checking for locked sets as defined by my last post, as well as other follow up actions. It’s a sysudokie review confirming that locked set removals do not compromise this historic example. The review also shows the level of effort that systematic subset detection involves in a typical case, and how the suset algorithm concludes when a subset is not found.

Hidden subsets can occur in box marking, but very rarely, because only slinks and aligned triples are marked. Naked triples are more common.  Two naked triples appeared in SdC 1.  The first, a nt128 in Cc5 had its effects (N1, C8) pre-empted in the sysudokie depth-first marking.  Looking at the column again, how was the naked triple identified? For one thing, the box slinks guarantee that no other 1, 2 or 8 candidates can appear in the other C cells in line marking.  The naked triple also preempts the C cells from c5, but the individual slinks do that.  The 8-clue and the np12 leave only three free cells to C and three to c5.

The second naked triple occurred when Er5 was filled with a 4 slink and aligned triples 2 and 8.  Its effect was the reduction of E to two free cells, which could be immediately filled.

I think it’s clear that the time to recognize these locked sets is when they are formed.  The same is true for the naked and hidden subsets created in line marking. The line marking trace reads

As line marking begins with lines of few free cells, little attention needs to be paid to subsets.  A hidden subset must have a naked counterpart.  Singles are obvious. Just look for two numbers in two cells with three to five free cells, and that or three numbers in three cells with 6 or 7 free cells. Beyond that, suset it or ignore it. 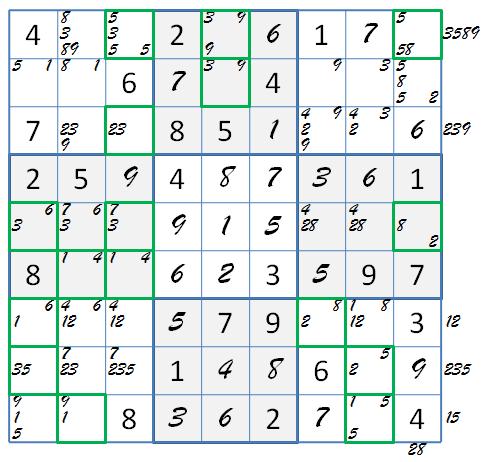 On the 5f: list,  r7 has five free cells. Its 4, 6 and 8 pairs don’t match.  All subset checking so far is easily done as we add line marks in follow up.  But r7 also completes the fill of the South boxes.

From there we generate

No subsets under four cells, so no subsets.

By the way, every suset of n cells with n-1 numbers is an Almost Locked Set, an ALS, which I delve into later.  The suset locked set app can be used to enumerate them.

Now on the line marking trace, we’re up to  r2, and the North boxes.  We’ll check for locked sets with the final  marking diagram repeated here.

Line r2, with 6 free cells, completes the candidates, and covers the North boxes.  In r2, we can have up to a dirty triple, but our ordered singles list is

because the other numbers are in 4 or more cells.

In the NW box, we there are also 6 free cells, and we have 3 box slinks that qualify.  I just checked that no two  slinks  fit into two cells, a hidden pair, or three into three cells.

This leaves us with the closure lines.  The W box is divided into naked pair and triple already. The subset check of closure lines goes well with the check for slinks. The line c1 has 5 free cells, and no locked pair. But c2, with 8 free cells is another job for the subset app. The cell limit is 4, and our list goes:

Line c3 is tested with the removal done and the resulting naked pair n place.  This leaves four free cells in the remainder of c3, and no more locked pairs, so further subsets.  As for c7, with 4 free cells, its two pairs don’t cooperate.

Finally, we get to c8 as line marking is finished.  Six free cells, four slinks and a triple, why not?

and we don’t get there.

Now we know that “Sue de Coq” missed no locked sets in her announcement of the technique named for her.  That’s comforting.  As for our scratchpad app for locked sets, you definitely would use it on a puzzle or solution you were publishing.  On day to day solving, or just looking for something important, maybe not.

On hidden subsets, the harder kind, watching the confinements of scarcer numbers catches many.  Then you can turn to counting free cells and imposing the subset size limit.  That leaves a reasonable number of toughies to suset or ignore.

Congrats, readers.  You have waded through my blog treatise on basic solving – that is, what you do to get the candidates.  Now the blog turns to advanced solving, what you do with those candidates.  Although you can smash almost all newspaper and magazine puzzles and most book collections with what you know now, there’s a lot more to it.  Just keep reading, OK?