This post explains how the regular XYZ-wing and WXYZ-wing make eliminations with toxic sets. Regular XYZ-wings are illustrated, and the XYZ form of the bv map is introduced.

If you are following the Order of Battle, you should be returning from the tour of Sue de Coq and the APE. In taking up the the XYZ wing and XY chains next, I’m actually skipping the grid based unique rectangle methods that come before them in SSOB. It’s because the UR methods depend heavily on alternate inference chains, which are introduced with Sysudoku signature irregular XYZ-wings in the next post.

First off, a checkpoint of the basic solving of our illustration puzzle, the Delta Sky “Even More of a Challenge” puzzle of June 2008. The bypass traced below gets you this far on the grid:

Then an easy box marking and somewhat tough line marking gets you to a grid containing a single alternate Sue de Coq.

Did you find it? If not, look for it now before scrolling up.

Yeah, it’s one of those clueless ones. The eliminations don’t look so promising, and you could skip it to avoid the verification. But if you’re a newbie and going through the posts as recommended, you don’t have much else to look for.

It’s not hard at all to generate the trace, which reveals two 1’s forced into r2. It looks like a real chore, doesn’t it? Converted to the arrow diagram, it still makes you look like a genius.   I hope you work through the translation and see exactly how it’s done. Like they say, impress your friends. Tell them about the trial trace later.

On to business, let’s put the resulting grid on the bv map and look for XYZ wings. Better yet let’s do that after I explain what an XYZ-wing is. Would that be good?

An XYZ-wing (left diagram) consists of a 3-valued cell, the hinge, and two bv, the wings, that match number Z in the hinge. The dashed curves, here and everywhere else in the blog, stand for weak links, or in sysudokie speak, winks. A candidate of each wing “sees” a different candidate of the hinge. The right diagram shows a Z-candidate seeing all three Z-candidates of the XYZ-wing.

One of the three Z-candidates of the wing must be true, because otherwise, the bv  X and Y are both true,  and the hinge has no true candidate.  This makes the hinge and wing Z-candidates a toxic set.  If an outside Z-candidate sees all three of them, it definitely sees a true Z-candidate and is therefore false. XYZ toxic sets often go victimless, because no Z-candidate is in position to see all three members.

In the XYZ-wing, the wings must be bv, not ALS containing XZ or YZ. This is to guarantee that if they don’t contain Z, they do contain X or Y.

If the wing bv Z-candidate see each other,  the cells of the XYZ-wing form a stronger pattern, the naked  triple.  In that case,  the X’s and Y’s also form  toxic sets.  Of course, if all three XYZ-wing cells are in the same unit, any candidate seeing any of the three toxic sets should have been removed before we look for XYZ-wings.

In this post, we’re going to limit ourselves to the XYZ-wings typically described in Sudoku instruction, in which the winks in the diagram above are the result of being in the same box or line. Let’s call this “unit seeing”. An XYZ-wing constructed by unit seeing we’ll call a regular wing. This post is about regular wings, with unit seeing victims. 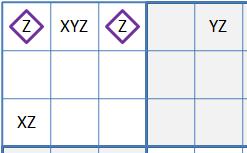 Regular XYZ-wings often go hungry, because of the geometry limits unit-based “seeing”. With one wing sharing the hinge box, only two cells can hold a victim Z. 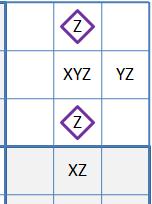 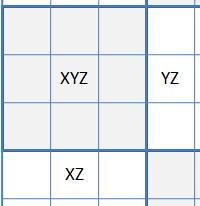 When both wings are outside of the hinge box, no cell location works with  unit based winks.

With one wink a box wink, the cases above, victims are scarce, but they do occur. See if you can find one in the grid below, which follows the SdC removals. 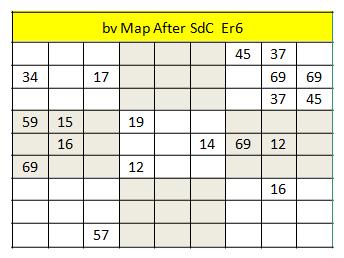 A bit tedious?  Actually, we don’t want to search for XYZ wings among the sea of candidates now on the grid. First, we get a bv map template or make a reasonable copy of one, and transfer just the bv to it. I like to place mine in number order. It helps me recognize when they match.

Then look for bv XZ and YZ that each see an XYZ hinge cell in their unit, creating X to X and Y to Y unit winks. No, wait. Actually it will be easier to take each cell with three candidates, and scan its row and column for the bv wing cells. And oh yes, the three cells can’t be in the same line or box. 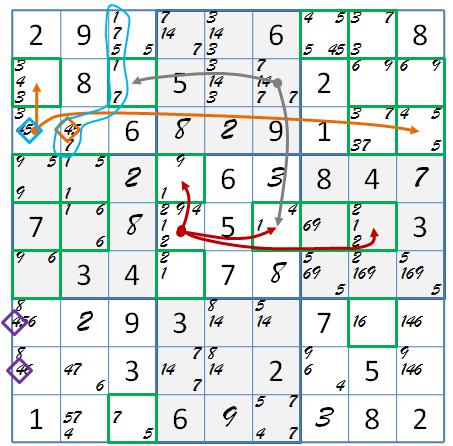 That’s right, there’s two regular wings. One is the 471-wing in the victimless crossing line configuration mentioned above. Then there’s the 354-wing marked in with the customary Sysudoku burnt orange arrows!

The wing’s removal of 4r3c2 creates both boxline removals, and a naked triple removing 5r3c1.

But what is that object in the middle of the grid? It’s a 291-wing with an extra hinge number and corresponding wing. I picked the 21 wing so that it would not be contained in the C box.

We get out our Sudoku bird book and it matches the rarely spotted WXYZ-wing. It’s hard enough to find a candidate Z that sees three other Z’s of an XYZ-wing. This one requires four. In our case that’s one too many. You can look, but I don’t think there are more yellow breasted WXYZ ‘s in this area.

The truth is, however, that we have not been systematic enough to exhaust the XYZ or WXYZ-wings. We’ve used only one kind of “seeing”, the kind that is based on having a shared unit.

Next post, I take into account the full scope of sysudokie winks, and show how to fully exploit the wings. You can continue on Delta Sky 6/08 Even More Challenging, but the blog puts it aside for later. For next time, apply your bv herding skills to find the unit vision XYZ in this grid from the review of Antoine Alary’s More Extreme Sudoku collection. But don’t peek at the review until you’ve found the regular XYZ’s. I’m making a list and checking it twice.