This post introduces “Empty Rectangle” weak links (ER winks) as a form of “seeing”. It is shown how the ER can be extended by a more general form, the forcing chain. It is also demonstrated that XYZ wings can be constructed and make eliminations via ER and forcing chain winks. 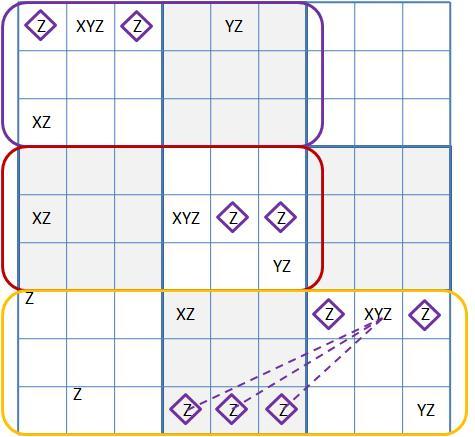 Here are the XYZ-wings again, with the cells that could hold Z victims marked by diamonds. The first two are regular cases, with the necessary winks supplied by shared units. The third XYZ-wing is also regular, but has three additional eligible cells by means of “ER” winks. They wink at the hinge Z through a mirror formed by candidates in a third box. Here is the logic: If Z in r9cj is true, then Z in r9c2 is false(wink), making Z in r7c1 true(slink), making the hinge Z false(wink). Thus each of these victim Z’s sees the hinge Z.

Is it time for an explanation of the advanced concepts of ER, AIC, forcing chains, and grouping? Sudoku veterans bear with me, because this post may surprise you, too.

ER abbreviates “empty rectangle”, a way to characterize mirroring boxes . When there is a rectangle of cells free of candidates of the link number, then the mirror box of an ER wink is possible. In the SW box of this example, the necessary empty rectangle is the chute SWr8, or r8c123. Z’s can be placed in chutes SWr7 and SWr9 to form the mirror. Sysudokies would refer to these sets of z’s as “groups”. This ties in to earlier posts because slinks can be drawn between groups that cover the candidates of a number in a box.

It’s not that we try to find the ER boxes themselves. It’s that we look for them when we need another wink for an elimination in some method.

The ER mirror box is useful for spotting forcing chain winks between candidates, but in Sysudoku diagrams, I use a more direct and explicit equivalent to ER, a grouped forcing chain .  A forcing chain is a connected chain of alternating winks and slinks, generally known as an Alternate Inference Chain or AIC, which starts with a wink. It expresses the fact that chain members are alternating true or false, when the candidate starting the chain is true.

Here, if a is true, b, d, and f are false and c, d, and g are true. Thus there is effectively a wink between a and b or d or f, which can be used in any solving method in place of a direct wink.

So what are groups? Logically defined, they are sets of candidates of the same number which are all false, or not all false. “Not all false” is the group’s “true”. Taking the group “true” to mean “contains a true candidate”, allows us the draw strong links between groups in the same unit that cover all such candidates in the unit. Yes, useful groups can be found in lines as well as boxes.

Here is one of the ER winks above represented as a forcing chain. A true Zr9c5 sees Zr9c2, and therefore forces the SWr7 group to be true, therefore seeing the hinge Zr7c7, as well as the wing Z’s.

And finally, before you put away your notebook: Winks are winks, so XYZ and WXYZ-wings can be constructed with grouped forcing chains, and possibly ER mirror boxes. We’ll label them irregular XYZ- wings.

OK, let’s put the notebook away, and apply the above to your homework.

You were only to find the regular 347-wing. But what do you have to do to be sure there are no ER goggling victims?

A quick way to resolve the question is to see if there are mirror boxes that help 7’s see the wing 7’s they don’t see. The four mirror boxes are NE, E, S and SW. SW, S, and NE just reflect 7’s back on themselves. The E just makes the hinge 7 look more true, not false. 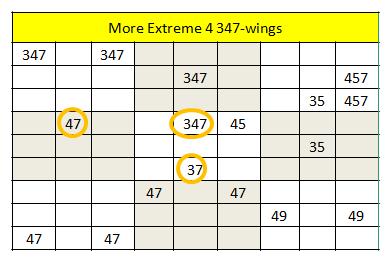 The Sysudoku XYZ-map is the bv map, with hinges added for possible XYZ and WXYZ-wings. Actually, the possible are added one at a time as the grid is examined for forcing chains creating irregular wings or completing the winks for victims of all wings. To be a possible hinge, the cell must contain matching numbers for two differing bv on the map, but without regard for locations.

I do the XYZ scan for hinges top to bottom and left to right, and started on 347r1c1. The 347 is added on the map cell when I confirm that 37 and 47 is on the map. The combinations(34, 37) or (34, 47) would have triggered the addition as well. Now I try each combination of XZ and YZ available wings for the XYZ-wing. The common number of the combination is the Z, and I look for X winks and Y winks with the hedge, easier wink first. Almost. In this case there is only one 37 bv, so if there is no 3-wink, I’m done with the 347 hinge and its four 47 bv.

So now we are ready to look for an ER or other forcing chain, having the beginning and ending candidates. Starting at r6c5 I’m looking for an AIC to 3r1c1. One (red) erases two more 3’s in W, but leaves 3r6c3 intact, failing to reach the hinge. But a second one(burnt orange) uses the r4 slink to see the hinge 3. It’s not an ER, but it is a forcing chain. 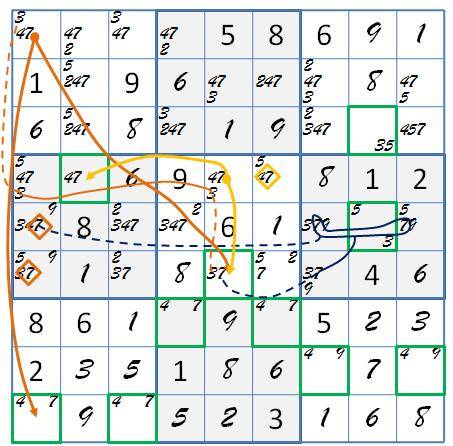 We have the four 47’s to check, after all. Since 47r9c1 4-winks directly at the hinge, we have an one irregular 347-wing already. Let’s look for victims. 7r6c1 goes quietly, unit-seeing all three toxic 7’s. 7r5c1 has a little trouble seeing 7r6c7 but an ER look through the E box is enough.

Anyone else? 7r4c1 has no path to 7r6c5 and no others can see both toxic 7’s in c1. Next we update the grid and scan for more hinges.

The wing 7r6c5 can’t reach 7r1c3, so we cross out 347 and move to r2c5, where 37 winks by unit and we look for 4 chains from the 47 bv. The search shows why too many 4’s disrupt the chains. The 457 hinges starting at r3c9, don’t get examined until the scan reaches the regular 347-wing that you found, and the 45 bv emerges. We scan for regulars and irregulars together. So when we find one, and alter the grid, we should review from the top, picking up just those decisions affected by the update.

On the 457 hinges, the wing’s Z will be the common number 4. We seek to attach the 45 wing first, with a 5 chain. On the grid it becomes clear right away that 5r4c6 is not going to see the 5 in either 457 hinge, and we can cross them off. As we pick up the scan after the 457’s, there are no more potential hinges to examine, leaving the XYZ map as shown.

Regular or irregular wings and unit or forced victims can occur in any combination. More Extreme showed us the two extremes.

Here is an example from the Paul Stephens  review later in the blog, The Sudoku Addicts Workbook, puzzle 134. The 13r2c6 wing is attached to the 123r1c3 hinge via ER 3-wink.  This puts a wing where the unfortunate 1r2c2 can “see” it.  The removal  completely unravels the puzzle. 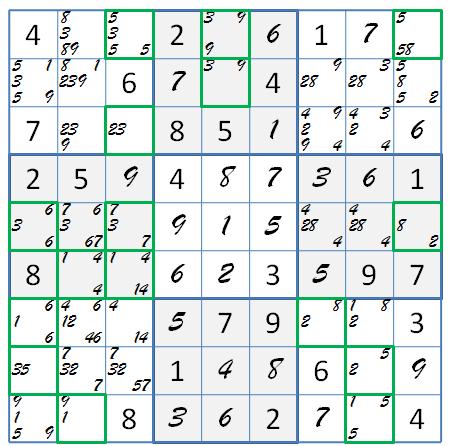 Want to test your XYZ map on a puzzle of some interest? How about the Sue de Coq founding puzzle? There’s a irregular XYZ-wing with removals that fortunately, do not tarnish the demonstration. You also might find a victimless regular WXYZ-wing.

Next, we look at a bv pattern very close to the XYZ wings, the Death Blossom Lite.

I'm John Welch, a retired engineering professor, father of 3 wonderful daughters and granddad to 7 fabulous grandchildren. Sudoku analysis and illustration is a great hobby and a healthy mental challenge.
View all posts by Sudent →
This entry was posted in Advanced Solving and tagged Empty Rectangle, ER, XYZ-wing. Bookmark the permalink.