This post explains the XY-chain, the most specific, easy to spot, and prolific of Alternating Inference Chains. It includes what many call the XY wing, as the shortest possible XY-chain. One XY-chain can generate multiple toxic candidate pairs.

An XY-chain is an easily constructed form of Alternating Inference Chain(AIC), built entirely of bi-vlaue cells(bv). AIC take many forms that we explore later. However, the basic harvest of bv cells guides us directly to a form of AIC that produces more removals than any other, the XY-chain.

Looking only at the bv cells, you often find a chain like this,

where matching bv candidates wink at each other, and a number z is repeated along the chain. There is an automatic slink between partners in a bv. If one is false, the other must be true. Weak links are put to good use here, forming the natural slinks of the bv cells into an AIC. There is a slink on both ends of this AIC, a particularly useful property. The end candidates are a toxic set!

A simple argument establishes this startling fact. If the left z is not true, then the first slink makes bv partner a true and a in the next bv false. Each bv repeats this inference making all left bv partners false and all right ones true, including the end candidate z. The clincher is that this sequence can be repeated right to left.

We are not saying that left or right z is true or false. Only that if one is false, the other is true. A candidate seeing both is not in the solution.

One caution: Matching end candidates do not form a slink. Both may be true. We know only that at least of them is true. That’s being toxic. Any outside z candidate “seeing” both of them is escorted out of the building.

Following  Andrew Stuart, I often refer an XY chain removal as an ANL. This stands for “almost nice loop”. It is an AIC with one faulty alternation, in that two winks occur together in the chain. That is what we create when we draw the victim’s winks. I generally leave them out. 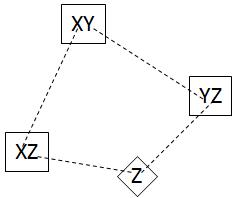 Different names are assigned to methods by Sudoku writers. Some writers name the XYZ-wing of my recent posts, the Y-wing. There are differences also in the packaging of solving concepts. I have come to a somewhat minority opinion regarding the XY-wing. I regard it as the shortest possible XY-chain, not as a separate thing. Maybe the reason why the XY-wing is typically treated separately from the XY-chain is that the wing is simple in concept, and the long chains found by computer solvers are thought to be intimidating to human solvers. Next post, we have a remedy for that.

I had the XY-chain safely back in the advanced posts, until I discovered how the complexity of a tangled net of XY-chains covering a high bv puzzle can be reduced to human proportions by a device illustrated in the next post, the XY railroad. With this tool, the maze organizes itself, bringing the XY-chain back into the bv scan. A blow for human solving!

First, let us honor the XY-wing as we drive past it to the XY-chain. Compared to the XYZ-wing, it drops the Z candidate in the hinge and creates a toxic set of two candidates. This is a case of less being more, in the sense that once this bv pattern is found, there are generally more victims, because it is much easier to see two set members than three. As in the XYZ-wing, the reason for the toxic set is simple. If both Z’s are false the wings suck both candidates from the hinge. 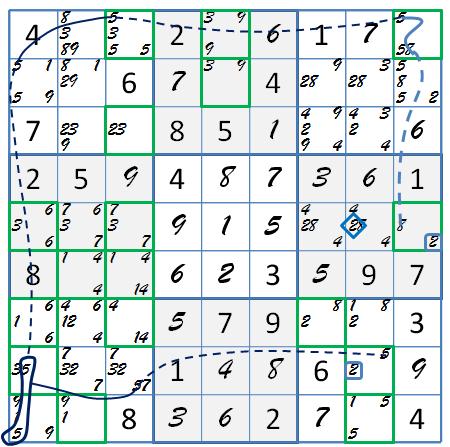 Like XYZ wings, XY-wings come in an irregular flavor by virtue of ER or forcing chain attaching wing to hinge. An astounding case comes from the Sue de Coq founding puzzle, immediately after the ER 239-wing. I once took it for a death blossom lite.

The sysudokie process is to spot the possible missing wing 25r8c8, and to seek an inference path to attach it. An ER 5-chain emerges when our attention is concentrated on it. 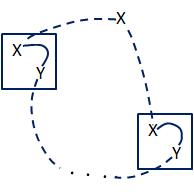 A second type of XY-chain by another name is the W-wing, in which matching partners Y from two identical XY bv see each other by forcing chain. If the bv were in the same unit, they would be a naked pair, but in the W-wing, the bv attach their internal slinks to the Y ends of the forcing chain, making the X partners the toxic ends of an XY-chain. The W-wing is an ANL! 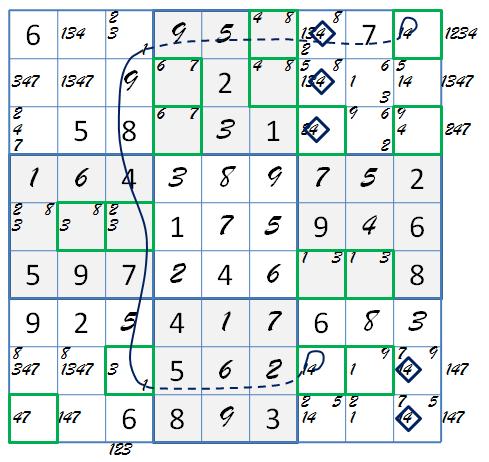 The example is from Bernhard Hobiger’s Hodoku Wings page, fresh out of line marking. In his description, Hodoku specifies that the bv partners should have a strong link, but he must have meant to say a weak link, since his examples fit the description here. A strong link chain works, but only because slinks double as winks.

Next, let’s examine how the human John Henry can match the machine to enumerate the toxic pairs produced by a bv thicket. Get your ticket for the sysudokie railroad, by doing the basic solving on Maestro 45, from Su-Doku Maestro, Niveau 8-9 of July-September 2009. I picked up this French publication on vacation in Martinique.