This post illustrates the complete enumeration of all XY-chains and toxic end pairs by drawing curves through the bv along XY-chain routes. XY-chains are then systematically divided into sub-chains with toxic ends. It’s a Sysudoku innovation. 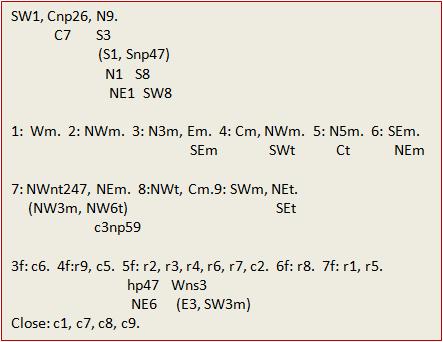 The puzzle is from Megastar’s Maestro series, Niveau 8-9 of September 09. It is number 45, and a Niveau 9, Maestro’s toughest.

The bypass was tough. Box marking brought a naked triple and a hidden pair. 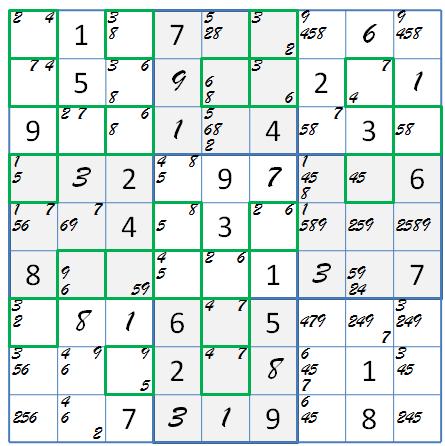 With the introduction to XY-chains in the previous post, I’m sure you can see many XY-chain segments in line marked grid.

Got MS ©PowerPoint or equivalent? You could start the curves on the grid, but if you’re onto the Sysudoku templates you already have the bv map, and have worked through the possible XYZ wings on the copy we call the XYZ map. I had no luck there, by the way.

So where to start? It doesn’t matter, because we’re going to curve this thing to the hilt. 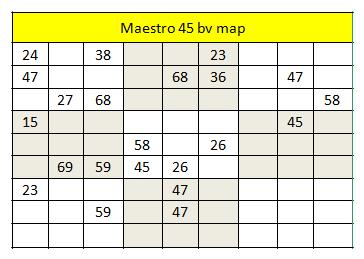 The only precaution is: Don’t start with a bv that winks with two more, one with each partner. You’ll then have to continue from there or tie into there later. Also, it’s best to look before you draw, and start with a chain of some length, if possible.

I passed over 24r1c1 because a curve from 23r1c6 to 47r2c1 passes through it. Going left to right and top to bottom, my first qualified starting point 15r4c1, and I see a sequence of 1547423 before starting the curve. 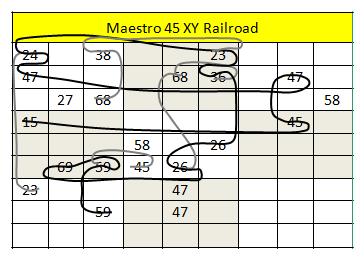 If you don’t draw curves, it’s never too late to start. There’s more about it on the Solving Tools page. It turns out I had a good candidate for the main line on the first try. I always zoom the view to 200% for this part. All I had to do was to add a few spurs that tied otherwise isolated bv into the main line.

I left off the spur from 27r3c2 when I saw that it would not generate a productive toxic set. Trace this decision out for yourself. It involves some travel on the rails, and this in itself shows the visual power of the railroad. I’ve done no harm if I add the spur.

It’s very important to understand the one- way nature of the railroad. The way curves merge together keeps us honest about the inference paths, entering and leaving with matching candidates. For example a spur from 68r3c3 to 58r3c9 goes nowhere. Bv 58r5c4 is likewise isolated.

Now to take advantage of the fact that every useful XY chain lies along the railroad. We’re already doing that to determine which spurs to add, aren’t we? The idea now is to systematically find every matching pair along the railroad. The process is to start on one end and examine every match along the railroad. t Only half of the matches can define an AIC with matching endpoints. But if one doesn’t, the next one will. When these matches are exhausted move to the next bv down the track and repeat. When that line is exhausted do its spurs and go to another line.

Try this process on the railroad map above, and find all the XY toxic pairs in Maestro 45. That will burn the words above into your brain as a process. Your neurons will love it. Now what’s left is to test each toxic pair for victims. It’s actually better not to interrupt the process to mark the removal of victims, because that can damage the railroad before it has delivered all toxic sets. Isn’t that weird?

OK, I suggest you play around with this on the above diagrams before scrolling up to see how I represent the XY-chain harvest on the grid. 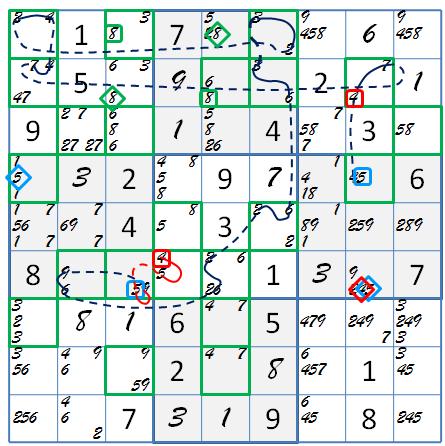 The XY-chain looks like something found only by computer search, but it only required   construction from the railroad map. The productive toxic pairs I mark with the little rounded squares. I chose black for the main line XY-chain.

Devastating as this attack appears, Maestro 45 survived. Maybe to illustrate something else later.

And just one more thing. The XY-chain is one form of AIC, among many. Different forms can occur in the same AIC.

Next post we look at the special form of the XY chain generally known as the remote pair. See the solving tools page for an email link for free templates, bv map included.