This post explains Sue de Coq and invites readers to enumerate all instances of it in the originating post’s puzzle.

Sysudoku places Sue de Coq among the first advanced methods to try after basic solving is completed.  It is done in a scan over the fresh grid, along with other methods not requiring any specialized viewing templates.

If by chance, Sue de Coq,  the reporter of the solving method of that name, were to be reading this blog (don’t  I  wish), he or she would be surprised as well as pleased to see it first among my advanced methods. She (I’m going with that, since we’re talking about a Sue),  almost apologized for bringing it up in the post, saying that this “two-sector disjoint subset” method would probably be superseded by the hot new method, forcing chains. Didn’t happen.

SdC  is based on a precise description of the numbers in the solution of a chute, the intersection of a box and a line.  For that description, we need logic functions, a device universally applied in engineering and science.  But simple ones.  Rocket science this is not. It’s the patience that counts.

De Coq’s post was brief and elegant, but used a rationale which, though correct, was limited to a rarely occurring special case of Sue de Coq .  For a clear picture of Sue de Coq game, let’s start with the players.

An ALS can give up only one of its numbers, and still cover its obligation to have a number be true in every cell. Therefore,

a chute cannot contain any pair of numbers in a remainder ALS.

In this post, let’s consider how this is applied in Sue’s definition of Sue de Coq. Sue looked for any chute with exactly five numbers, along with two bv cellsof four numbers in the two remainders, each matching a different pair of numbers in the chute. Since each bv limits the chute to one of its matched numbers, only three numbers remain for the chute.

To see what happens next, here is a diagram of the chute and remainders, with the bv partners a, b, c and d. In Sue’s definition the rounded squares represent the bv cells, but the more general Sysudoku definition, they represent ALS containing the two chute numbers.

To describe the chute contents we use the logical expression    N(a + b)(c +d) . In the expression, “multiplication” stands for logical “and”, and the plus sign, for logical “exclusive or”, i.e. one of two and not both. Each factor describes the contents of a cell in the chute, without regard to order.

The chute cannot contain both true a and true b, because this would take both numbers from the remainder ALS(the bv). Let’s call the pair (a,b) an alternate pair, or more simply, an alternate. Same for the pair(c,d).

Sue’s definition depends only on the fact that two of the numbers left to the chute are alternate numbers. Since (a or b) must be present in the chute, and the ALS covers the one that is not, any other a or b in the line remainder containing the (ab) bv cell can be removed. Similarly, any c or d in the box remainder containing the(cd) bv cell an be removed. The third chute number, regardless of its form as a clue or multiple candidates, is toxic to matching candidates in both remainders.

In the next post, the definition of the Sue de Coq is expanded to allow any form of ALS. Also, you will see how to make Sue de Coq work with only one alternate . 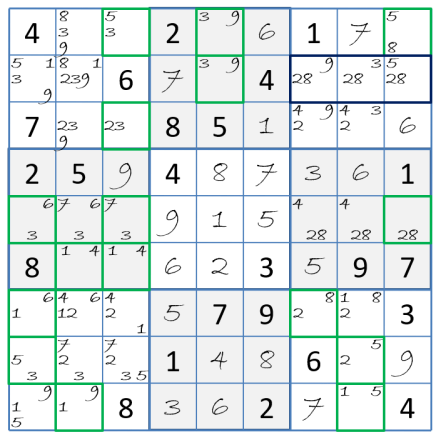 Your next challenge is to find all of Sue’s classic Sue de Coq and their removals, by the method above. Except, like Sue, you can only use bv for the ALS. Write down the chutes, the logic expressions,  and the removals by number and cell location.  Do each one without regard to removals by other ones.  The checkpoint will tell you if you, or Sue, missed any.