Happy New Year 2012!  I’m happy to be sharing my discoveries in this blog, and I can promise a more innovations in 2012. It’s about how we can best use our visual and mental abilities to solve difficult Sudoku puzzles.  Not a world changing enterprise, but dear to some hearts, and good mental exercise for all.  If you are just arriving, please glance at the beginner’s page, and start with the September posts to understand the blog at this point.

While you are looking for bv and other ALS in Sue de Coq box remainders and line remainders, it’s the ideal time to find candidate removals via a technique known as APE.  APE stands for Aligned Pair Exclusion, the “pair” being a pair of aligned cells seeing  several ALS that restrict the contents of the pair.

The APE method determines the pairs of numbers permitted in the solution of  two aligned cells by the aligned bv (or other ALS) they “see”.  Potential Sue de Coq chutes make ideal aligned pairs because all ALS in the remainder see both aligned cells.  In Sue de Coq, ALS that share numbers are less effective, but in APE, they are very welcome.

My favorite example comes from a doggedly difficult puzzle I encountered in the US Air Hemispheres magazine in July 2009.

The potential SdC Er4 sees many bv sharing 3. Here this is great. Neither 2, 4, nor 9 is permitted to pair with 3r4c7 in the solution, but cell r4c9 has to have something, don’t you think?  The only way out is to remove the 3-candidate.

That makes a good story, but it’s not a systematic basis for doing APE. When you suspect an APE, just list out all possible pairs and then scratch out all of those prohibited by the onlooking ALS. Here, that looks like

Now look to see if any of the left cell’s candidates are totally scratched out. In the above, it’s 3. Then do the same for the right cell.  Here r4c9 gets to keep 2, 4 and 9, which all appear unscratched on the right. With a little practice and good hand and eye coordination, you can simply leave the prohibited pairs off the list.  The 3 never shows up.

That’s not exactly the elimination anticipated in an Aligned Pair Elimination. I think of it as a trial generator, and call this application of APE an APT.

You might be thinking that it was hard to find the APT contradiction above, so I’d better come clean and admit that I don’t spend the time to find such things either. The sysudokie secret weapon is the trial trace described on the traces page.

Working from the trace, the trial can be  displayed  graphically, with arrows to show “implies”, solid lines for slinks and dotted for winks. You can show the inference path from SE3 to SW8 and S8, leaving out the rest.

The trial trace is the tool for verification of most single alternate Sue de Coq as well. As you see above, it is very much like the regular 2-D trace used in basic solving. But the 2-D trace is depth first, finding all the results of a list item before exploring the next. The trial trace is breadth first, exploring entire lists, but level by level, down the trace page.   When you reach a contradiction, you can then apply arrows to document the simplest path to the contradiction, if there is a contradiction.

Ready to try an SdC trial trace? OK, with the full grid above, apply the APE elimination and the APT clue. Then the APE chute becomes a classic Sue de Coq removing two candidates. Now do a trial trace on the Wr5 chute containing the naked pair np57, first identifying what Sue de Coq you are verifying.

Returning to APE, a weakness is that removals are not guaranteed.   You can expect many unsuccessful trials.   A strength is the ease of confirming a removal. Failed candidates for SdC are good prospects for the full APE, or at least an APT.

In the original order of posts, next week’s reveals more about this USair puzzle, and if you’re going through the posts by date, and want to do the basic solving, start with the straight up Calibri script numbers in the full grid above as the given clues. 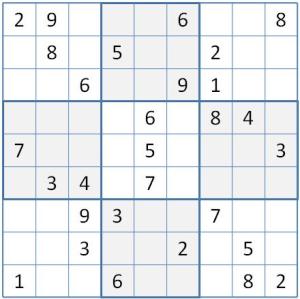 Those who skipped over the bv map posts to follow the Sysudoku Order of Battle should now return to the November 15, 2011 post, The BV map and Regular XYZ-wings. I have a different assignment for you in that case. It’s another airlines puzzle, from Delta Sky magazine of June 2008. Do the basic solving and we’ll use it for several assignments. I’ll have checkpoint traces.

I'm John Welch, a retired engineering professor, father of 3 wonderful daughters and granddad to 7 fabulous grandchildren. Sudoku analysis and illustration is a great hobby and a healthy mental challenge.
View all posts by Sudent →
This entry was posted in Advanced Solving and tagged Aligned Pair Exclusion, APE, APE trial. Bookmark the permalink.