This post was revised in October 2015 to update the enumeration method for ALS  toxic pairs demonstrated in the previous post. Here I also checkpoint the basic solving of demonstration puzzle of Sudoku Maestro 8-9, Fall 2009. In the next, the checkpoint will follow the SOB order for advanced solving of this puzzle. Your homework is to continue with SOB, and to see if any of the toxic pairs would survive to be found.

Almost Locked Sets (ALS) suitable for toxic sets are numerous and can be very elaborate, as the examples of my last post make clear.  It is humanly infeasible to search for them directly, but what sysudokies can do, on the rare puzzles that reach this stage, is to enumerate the ALS in all units, and match them pairwise with those of other units to reveal the promising toxic sets.

This post will illustrate the process with the Maestro 8-9 demo puzzle of Fall 2009.  With a box marking trace of 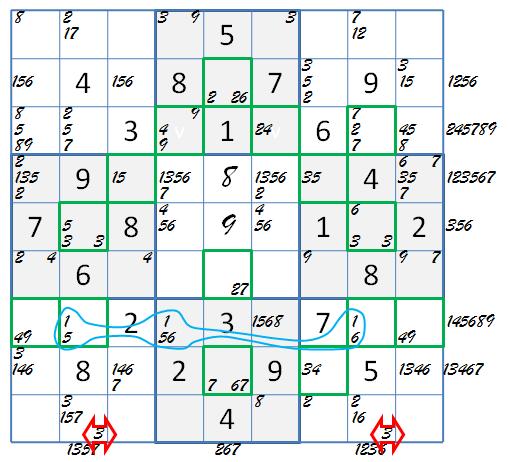 Line marking starts with a 3-wing, which is left in place for continued line marking. Next is a naked triple, shown here.

The 3-wing you found is the first technique demonstrated in the Maestro magazine.

In the original version of this post, I enumerated the ALS in rows, columns and boxes, then found the ALS toxic pairs reported in Maestro. The enumeration and the search through the tangled mob of ALS was such an effort that I followed Bob Hanson’s advice and effectively shut off my ALS toxic set engine, never calling on it in subsequent collection reviews.

Now I’m switching to a highly filtered version. In an extensive search, a filter is a mechanism that rejects most candidates early in the examination by asking the right questions first. We do it all the time. In this case, we agree to look at all ALS, which is a large number, but about half the square root of the number of pairs of ALS. The filter is that we only consider other ALS as toxic set partners if they are close enough, and contain just the right candidates to form a toxic pair with the ALS at hand.

Why did it take me three years to dream this up? In my defense, here in October 2015 I’m still ahead of the pack on how to spot every ALS-XZ elimination. You might still want to defer it as long as possible. Anyway, let’s see how it pans out in the Maestro demo case.

But persistence pays off, as the next suset

announces ALS 1347/12357, whose extra number 2 creates a toxic set.This second toxic set elimination collapses the demonstration puzzle, but going back, and starting the ALS-XZ scan on row 5, we soon get to cobra 3.

Had we started with boxes, the center box C would have been the only hit, with 1378/12367, both obscure and indecisive, but definitely vulnerable to the Sysudoku systematic enumeration defined here. Tell ‘em where you got it.

Next we checkpoint your exploration to see how far the Maestro demo would have gotten under Sysudoku SOB scrutiny. Also we continue with ALS techniques, looking at the full blown Death Blossom with ALS petals.