A Limited Pattern Overlay on Maestro 22

This post details the LPO enumeration and pattern overlay on Maestro 22. To sysudokies working on this over the last posts, the slinks between  7 –candidates suggests coloring.  Every 7-candidate belongs to the cluster.  With no XY-chain, SdC , APE or X-panel results, we at least start LPO with 7 as a number with only two patterns. The freeform enumeration panels are below, except for  the 3-panel.  This panel might be a candidate for “no pattern” removals, but has too many patterns to be useful in LPO. 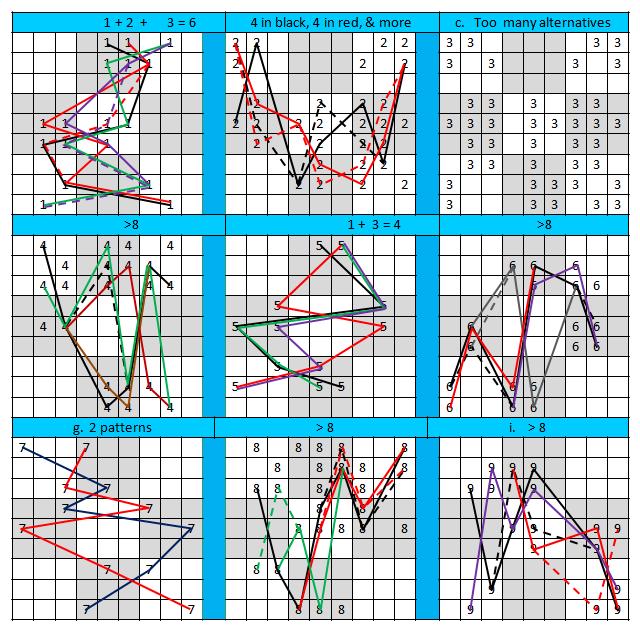 Translating freeforms into pattern lettering, we have these three patterns to overlay.  The overlay process is every bit as challenging as pattern enumeration.  I normally overlay all eligible numbers at once, comparing pattern cells row by row, left to right.  In this case I would consider overlaying patterns by pairs, starting with the 5 vs7  overlay.

Here we will overlay patterns for 1, 5, and 7 at once, for illustration. Going row by row and left to right, we document each conflict, expressing the conflict logically.  For example, the first conflict on r1 is in cell r1c5, between patterns 1a and 5a.  Representing different numbers, patterns 1 and 5 compete for r1c5, and only one of them can have it.  We express this logically as “not(1a and 5a)”. The conflict means that one of these two patterns must go.

The following is my list of all the conflicts, the raw data of pattern overlay.

I’ve made the notation very compact to simplify interpretation, but to spell it out:

This gives us good results from the overlay,  but it does require close observation.  But have we found everything?  For more complex cases, we need to arm our carbon based computers with a more systematic  way to extract all of the available inferences in the overlay data.

Here is the plan:

The observations rejecting  7b and 5b are clearly displayed in the tables.  Also, 1e is rejected for conflict with 7a.  The tables also show where a pattern of one number implies a pattern of another by conflicting with all of its competitors.  Thus 1b or 1c imply 5a, and since 1e is rejected, 5d implies 1a.

Back on the grid, we place 7-clues in the 7a pattern.   We can also remove 5-candidates that occur only in the 5b pattern, and place a 5-clue in the  “acd” cell in the 5-pattern, since all three remaining patterns contain that cell.  The blue/ green 7-cluster is erased.

These actions do not produce decisive results. We will continue solving Maestro 22 in the next post.  If you want to test your inner sysudokie, look for x-chains, and color traps. I will checkpoint that, and go for another round of LPO.

Meanwhile, how far did you get with Stuart’s Unsolveable of 1/29/12? Here is a trace for the box marking:

Continue with line marking for a checkpoint in the next post.

I also owe you a checkpoint for a column wise freeform pattern analysis of the second example in The Logic:

I'm John Welch, a retired engineering professor, father of 3 wonderful daughters and granddad to 7 fabulous grandchildren. Sudoku analysis and illustration is a great hobby and a healthy mental challenge.
View all posts by Sudent →
This entry was posted in Extreme Solving and tagged LPO, pattern enumeration, pattern overlay, POM. Bookmark the permalink.

4 Responses to A Limited Pattern Overlay on Maestro 22