In this post we checkpoint the solution of Stuart’s Unsolvable 40, via LPO and a coloring cluster extended by pattern slinks.  The solution of this puzzle by pattern analysis expresses well the ideals of Systematic Sudoku, and demonstrates what can be missed when a trial and error method is accepted as a solving method.

The previous post saw the extension of a coloring cluster by means of a strong link induced by pattern enumeration.  The extended cluster trapped a candidate of a previous red/orange cluster, proving its orange candidates false.

The elimination of the orange 7 invokes the  marking: 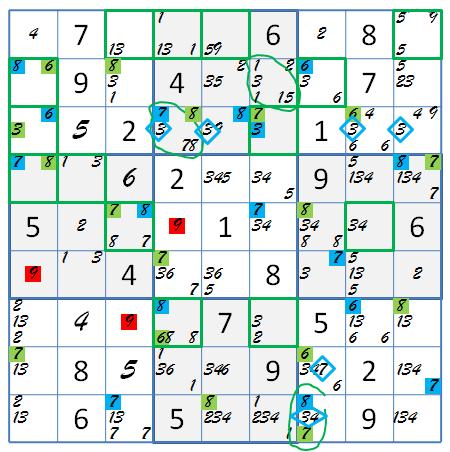 The extended cluster forces two green 3-candidates in c7, proving blue true.  This is enough to  force the complete solution below with the marking: 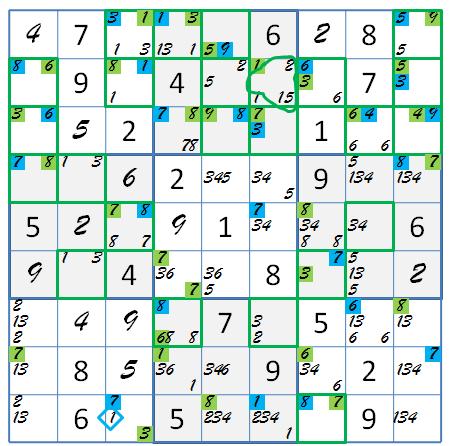 Stuart’s Unsolvable 40 illustrates the ideals of Systematic Sudoku in many ways.  As expected,  it resisted the basic and advanced techniques preceding LPO in the SSOB, to  a point where many solvers turn to some form of trial and error.

The earlier trials on the blue/green cluster revealed  the solution, but we continued on.  As a result, we were able to illustrate how to add number pattern sets by tallies, and we discovered a new solving resource in patterns,  the pattern slink.

These results demonstrate the primary Systematic Sudoku argument against the use of trial and error in any form as a solving method.  The success of the trial hides the logical constraints that systematic solving seeks to reveal.

In this regard, we make no distinction between the trial of a cluster color constructed with diligent effort, and the trial of a candidate in an arbitrarily chosen bv cell.

Is there any occasion when T & E is justified?  Yes.  When a solution is not available, sysudokies might rely on such trials to obtain one, when the choice involved is narrowed sufficiently.  Human solvers make mistakes, and a solution is necessary for finding where a mistake reveals itself by removing a candidate in the solution.

In this case I had not discovered how to obtain a solution from Andrew Stuart’s site (revealed soon), and I needed one.   My mistake was the omission of a freeform in pattern enumeration.  In the narrowed choice of the trials, both sides were wrong, so I knew for sure that a mistake had been made, and I found it in the most likely place, the very complex pattern enumeration. With the mistake corrected,  we then press on,  not accepting the corrected trial, decisive as it was, as a solving method.