I have to interrupt my review of forcing chains to celebrate the hugely successful, first time Sudoku tournament put on by my hometown Akron-Summit County Library.  Upwards of 50 solvers enjoyed three 20 minute rounds, followed by an exhibition of skill and daring by the three top finishers, as they filled in a championship round puzzle up on the auditorium stage.  Puzzles were from Will Shortz’ series of collection books, with his permission.

I won’t report the names of most participants, unless they care to tell you via a comment here.  Contestants were identified by a badge number.  I was one, number 13, ranking below the halfway mark on the scoring.  I will divulge one name, but not her score.  She brought along her poem in honor of the occasion:

I am seduced by Sudoku!

I hear the Japanese are to blame

For inventing this numbers game.

Just the numbers one to nine,

But finding the solution does take time.

Check the boxes, rows and columns –

On this subject there are volumes.

In newspapers, magazines, and easy chairs.

But I see numbers in my sleep.

I just want you to know,

Where does the time go?

There were three puzzles to solve per 20 minute session, and scoring was based on the accumulated number of correct clues.  So it was not a time for advanced strategies.  The finishers and the audience worked simultaneously on the championship puzzle.  Except for me.  I was focused on the stage,  hoping to pick up some clue on how the top solvers went about it.

Of course I couldn’t wait to get the championship round puzzle onto my PowerPoint template and see what makes it tick. I was a bit surprised to find that, although not a pushover, it solved readily in box marking, the first basic stage of the Systematic Sudoku Order of Battle.  In box marking, the solver goes through the numbers, marking the strong links (slinks) and clues created in boxes and lines, by clues and marks (explained below). It is strictly reacting to immediate targets of opportunity as they open up.  A sysudokie as talented and quick as the finishing contestants would have mopped up this puzzle in 10 minutes!  Don’t look at me.  I’m 75 and quick like molasses.

In the diagram below, you have the championship round puzzle(Calibri font), derived solution(Brush script), and the smaller pencil marks.  Tournament rules would require that you erase or mark through all pencil marks.  The Summit sysudokies  might lobby to get that rule changed next year! 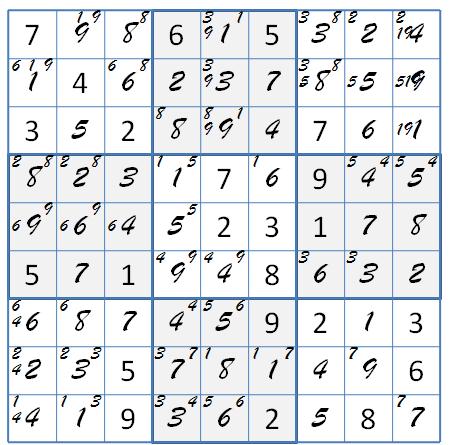 Would you like to see exactly what I mean by “mopping up” in box marking?  OK, but for the benefit of first time readers from the tournament (I handed out a bunch of cards), let me explain a few things about the box marking trace that comes next.

Sysudokies write out a series of solving operations in a stream of text, the trace.  Detailed rules are linked on the home page.  Rules for writing a trace are challenging, but reading a trace is very easy.  But  you have to have a copy of the puzzle, and do the marking as you read.  This is because the trace just gives the result and the box location of each step. The reader has to supply the reason for the result, based on the current state of the puzzle.  So the puzzle is gradually solved as you read the trace from left to right.  Tournament contestants can definitely interpret every step taken in solving this puzzle.

In Systematic Sudoku box marking, pencil marks are added only to show slinks, the strong links connecting candidates when there are two of the number in a unit, and triples, sets of three aligned in a box. The marks along the top of the cell are for strong links.  The left side position is for triples.  The bottom corners are for marking strong links along rows (left corner) and columns(right corner).  These marks are added in the second stage of basic solving, called line marking.  A puzzle surviving line marking has all its candidates marked, and is ready for the advanced techniques.

Here are some conventions of the trace that you will encounter.   Results are located by box. Boxes are named compass wise, like NE, S, SW, etc. The center box is C. Rows are numbered r1, r2, … and columns c1, c2, … This puzzle has only naked pairs (np), slink marks (m), and triples (t).  In box marking, we proceed by number.  In a result, the number is not repeated if it is the current number, unless the result is a clue.  The symbol “=>” or indenting on the next line, means “implies”.  Parentheses are used to enclose a list of effect implied by a causing result.  In a list,  effects on the same number are listed first.

box imply a 3-clue in West box, which implies 3-marks in the East box.  No result for

To get you started, here is an interpretation of the first trace line:

1: 1-marks in Center box.  2: 2-clue in North box implies 2-marks in NorthEast box.  2-marks in SouthWest box.  3: 3-marks in North box imply 3-marks in South, and 3-marks in SouthWest box imply a 3-clue in West box, which implies 3-marks in the East box.  No result for number 4.  5: The second marking has a list of three effects, starting a series.  The list starting with the naked pair in the South box, and column 5 was continued on the next line, to keep the trace on the page.  When you complete marking the row 6 naked pair 27, you return to the effect of the 3-clue in the East box.

As you go through the trace, notice how each step triggers the next.  That’s why thoughtful pauses are at a minimum in box marking.  It just rolls along. Lists represent what you have to remember and come back to, if you want to capitalize on every clue. 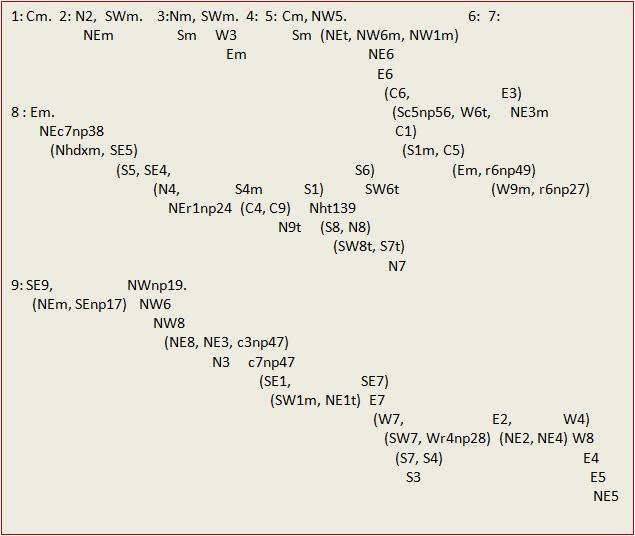 I hope you will read my extra pages and early posts, and begin to start your puzzles the sysudokie way.  Hard or easy, you start the same way, and follow an order of battle to the finish.  This is a common ground shared among sysudokies.  Comments are welcome, especially if you have questions.  A good summary of solving innovations and Office tools available on the blog is my first year anniversary post.

Congratulations to the Akron-Summit Library and thanks for the tournament.   Let’s do it again next year!

2 Responses to The 2012 Akron Sudoku Tournament