As of this post, this statement continues  to appear  in Andrew’s sudowiki.org introduction to Unit Forcing Chains:

“I do know some Dual Unit Forcing Chains but they are part of such nightmarish puzzles.  I don’t want to use them as examples.  They are pretty rare considering that Alternating Inference Chains are sought after first.  So we are going to plunge straight into a Triple.” 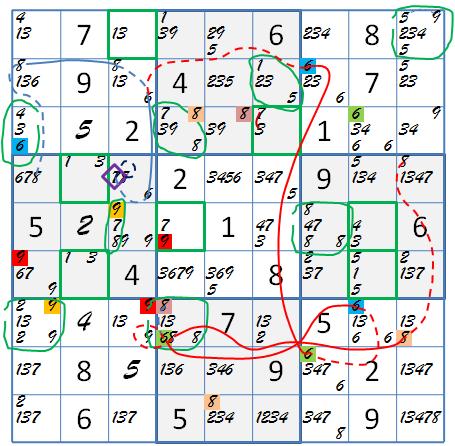 For carbon based solvers, triple unit forcing chains may be every bit the nightmare that Andrew mentions.

Andrew Stuart’s solver concluded its machine gun burst of triple cell forcing chains of my last two posts with a triple unit forcing chain.  Row r4 is the unit, and the forcing chains start on the 8-candidates.

Comprehensive search for triple unit forcing chains is not a task meant for humans,  but here is a possible heuristic scenario for this one:

A human solver is building and AIC network, but when the forcing chain from r4c1 is found to converge on a candidate in the same cell as the second 8, there is an incentive to try to reach that candidate from the remaining 8 of the row.  Patience is rewarded by a merge with the first 8 chain concluding the removal.

Now for the box marking checkpoint on the US Airways Hemisphere puzzle that befuddled Alex and me.  It goes

Now you can fill in the line marking leading to the candidate filled grid of the APE post of 1/3/12.  Once you have done that, now I must ask you to critically examine the excerpt on the SdC Er5, which appeared in the next post, Sudoku Levels of Difficulty .  Read on after you have registered your vote, yes or no.

You knew there was a problem, and I’m betting you found it. I’m burying it in words so it would not leap out at you prematurely, but once you have established that SdC Er4 = 7(1+2)(4 + 9), the three in r4c1 has to go along with the nine, because this cell must have the one or the two.  Unfortunately, this makes the Death Blossom via ER of this post a splendid over complication.  It’s on my handout cards, for goodness sake.

Correcting for that, now you are invited to a Sue de Coq scavenger hunt where you are to collect SdC in r4, r5, and c4. I know that seems too easy, but be very careful of what I didn’t say.  Maybe you will do better than I did.