Here I will summarize for you the variations of the unique rectangle method, UR for short, as detailed in  the most complete sources I know of, the www.sudocue.net  solving guide, and  Andrew Stuart’s Logic of Sudoku.  Later posts will bring additional UR patterns encountered recently. 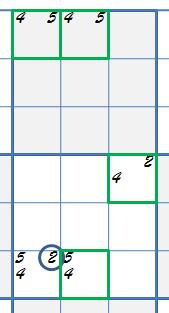 UR methods are based on a rectangular pattern of cells containing the same two candidate numbers.  A naked pair occupies two corners along one side of the rectangle.  The pair candidates are contained in both opposing corner cells, along with extra candidates.  The pair cells are commonly called the floor ; the opposite cells with extra candidates, the roof.  The rectangle corners are contained within two, not four, boxes.  This allows an interchange of paired numbers to occur without affecting other candidates, a violation of uniqueness called a deadly pattern.

If uniqueness is guaranteed, an action that is required to prevent the deadly pattern from occurring –  and furthers solving the puzzle – can be taken.  A variety of actions will come to mind,  once  the unique rectangle is recognized.  A typical one is the promotion of an eligible candidate  in the roof to a clue.  In this example, from the Sudocue guide,  the third candidate in the roof is confirmed, with the immediate payoff of the second clue in the roof box.  Ruud calls this a unique corner .  In Logic, Stuart  lables  it a unique rectangle, Type 1.

Stuart’s UR, Type 2 is Sudocue’s unique side.  In the guide example, two candidates of the same number are the extra candidates in the roof. To prevent the deadly pattern, one of them must be true. This requirement dooms two guilty bystanders.

For every UR type, the two boxes containing the pattern can be aligned vertically or horizontally. The latter is below.  Logic calls it Type 2b.

For a reason to be revealed in the next post,  I came across a first cousin of the Stuart type 2, in #110 in Tom Sheldon’s Master  Class. It is not included in the Logic or sudocue lists. We can call it box/line UR, because it applies box/line logic to a UR pattern, confirming a candidate.  The new clue collapses the puzzle, which to that point, had been a very tough line marking.  See if you can find it. 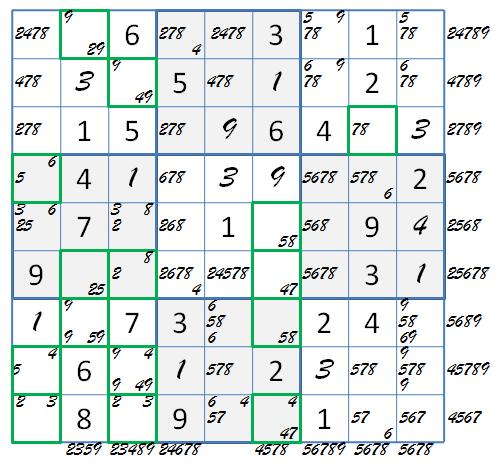 Andrew Stuart’s Logic Type 3 has no direct counterpart in the guide , and that’s OK.  It isn’t necessary to become familiar with every possibility, because the pattern sets a clear goal, and your solving experience will weigh in when it gets the call.  Logic’sType 3 calls attention to a resource you will relish, however, if you’ve been enjoying Sue de Coq removals.

First of all, have you found the unique rectangle?  The floor and the roof? OK, now what has to happen  to prevent a deadly pattern?  Either 5 or 6, right? Now think of Sue de Coq, and you see exactly why the fives have to go! 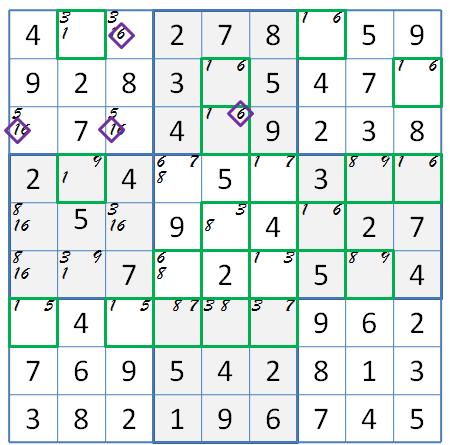 Another idea worth planting is Logic’s Type 4, or Sudocue’s unique pair. It turns the tables on the roof’s matching candidates.  Find the rectangle in this Logic example.

Fittingly, the caboose of our UR train demonstrates the ad hoc nature UR actions.  It’s a stretch to assign a name to what happens here, but the Sudocue guide goes with unique subset.

Dear readers, we are not quite done with the unique rectangle.  Both  sources for this post refer to unique rectangles with just one bv corner.  This is going to make the initial pattern recognition harder, but I have to check it out in the next post.

I'm John Welch, a retired engineering professor, father of 3 wonderful daughters and granddad to 7 fabulous grandchildren. Sudoku analysis and illustration is a great hobby and a healthy mental challenge.
View all posts by Sudent →
This entry was posted in Advanced Solving and tagged deadly rectangle, unique rectangle, uniqueness methods, UR. Bookmark the permalink.