Here are some images from the Master Class review puzzles that illustrate Systematic Sudoku solving in action.  I deemed the collection strong in basic solving, with very limited excursions into advanced techniques.

First is the #40 grid at the close of line marking.  The line marking trace is below the grid.

The 4-wing came on the first line marking, because of the naked pair in r6.  It remained marked as shown , keeping 4-candidates out of c1 and c4 while seven other rows were marked, and producing a naked triple 479 in SW. It’s an outstanding example of line marking X-wings.

Next is an excursion into advanced level and also into Tom’s twilight zone, in Master Class #60.

A regular 139-wing makes a productive removal, but XYZ-wings are not in Tom’s repertoire.

I checked for regular fish or unique rectangles.Did I miss something?

Moving on, #60 is terminated by another technique from Tom’s twilight zone, the XY chain. Two chain sharing XY ANL escort it out of the building.

Our next stop is the line marking of Master Class #80. It shows what a difference one naked triple can make.

For the “before” I have a line marking I was faced with when I missed the naked triple in the NE box.

This is clearly too many candidates, judging from the other Sheldon puzzles. Then I spotted the naked triple.

The “after”  is the 2D trace of the naked triple trace marking.  It’s what a collapse early in line marking looks like. No searching for patterns, or thinking about techniques to use. Just actions and effects. 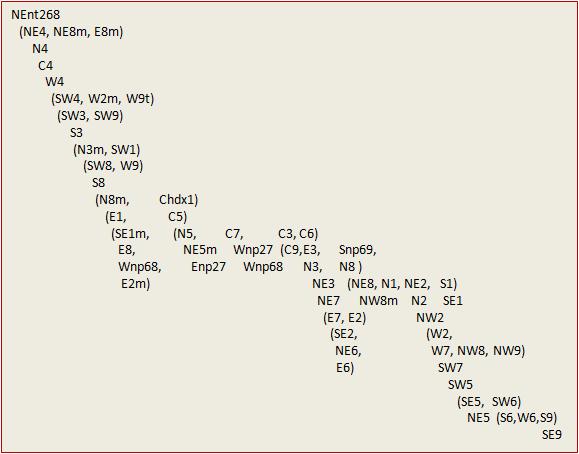 A critical point  where avalanche could have stopped was the hidden dublex in the C box(Chdx1), returning for a second effect after the first long run. 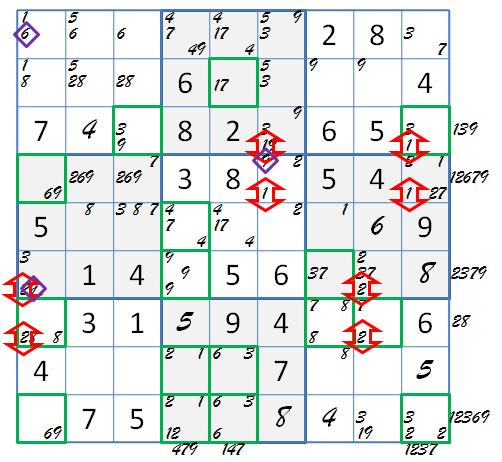 One of the advantages of slink marking is the ease with which X-wings are spotted during line marking.  This feature is shown off in the line marking of Master Class #100, where two X-wings cut the puzzle down.  In this  snapshot, we see both wings  are left in place as line marking continues with r9.  The 2-wing generates a naked pair in c1, removing 6- and 9-candidates.

The 1-wing had no victims when first spotted, but the next line c6 will bring them, with a fill string of 139.The 1-wing can then force a naked single 2,  collapsing #100.

The Master Class highlights should definitely include the off beat unique rectangle that was mentioned back in a UR post. After another brutal line marking, the UR promotes 2r5c4 to clue, collapsing #110. The post identified the candidate as a guard preventing the boxline from generating the deadly rectangle. Serving just as well is the naked triple formed by the Stuart Type 3 combined cell.

The primary sysudokie lesson is, once the unique rectangle possibility enlists your focused attention, all kinds of logic turns up to make removals and confirmations.

Like #60 and #110, Master Class #120, seems to require much more Sudoku acumen than Sheldon shares with his readers. The unique rectangle here, like the one above, requires a focused analysis, but Tom offers no principles of UR analysis at all.

The Sheldon anticipated swordfish makes two indecisive removals, but after that, we must wander in the Twilight Zone.

I had found an indecisive removal by an SASdC in NWc3, and the 4r7c4 UR removal  by multiple forcing chains. A color wrap by an XY chain finally dispatched #110.

All of this completely beyond the Master Class “lecture”.

But then, in my review of Hodoku in August 2015, I focused again on the UR, I discovered that this one above is a Hodoku Type 6. The confinement of UR partner 7 to the corners of the rectangle allows the removal of 7’s from the diagonal containing extra candidates. The new clues 7r7c6 and 7r8c8 combine with the removal of 4r7c4 to collapse Master Class 120.

All in all, an entertaining collection of puzzles, if accompanied by less than adequate instruction.