Here’s a show-and-tell on some krazy events of the Super Tough review.  The general review was in the last post. The puzzles come from www.krazydad.com . This is just the highlights, but it is a snap to download these puzzles and work through to these snapshots as checkpoints.  If you like what you see, you’ll be glad you have the bucket from whence comes these drops. 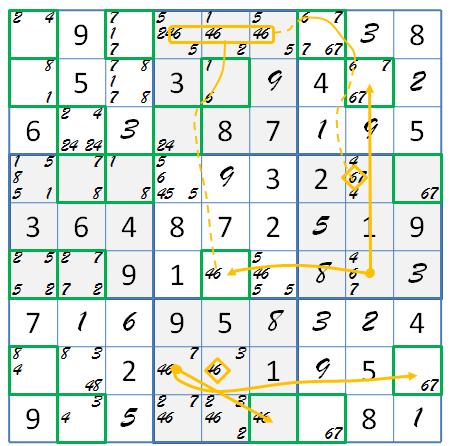 The blog history on this deserves some link back. I took up  XYZ-wings first.  Then the ER wings.  Not long ago, we began to incorporate grouped and ALS nodes into AIC chains.  Now it all flows together before our very eyes.  Sweet!

The book 2 #5 goes on to present XY-chains, a finned X-wing, a remote pair,  every color trap there is, and a color wrap before retiring. But we’re moving on to the next performer,  the #5 from book 4. Its ER XYZ-wings are even more spectacular. I’m not sure you should look. Now that you know how they work, you’ll be expecting one in every hard puzzle.

The orange ER 123-wing removal enables a second grouped ER 123-wing to emerge.  The ER winks in both of these wings follow ER rules. An ER wink can always be expressed more explicitly as a forcing chain. 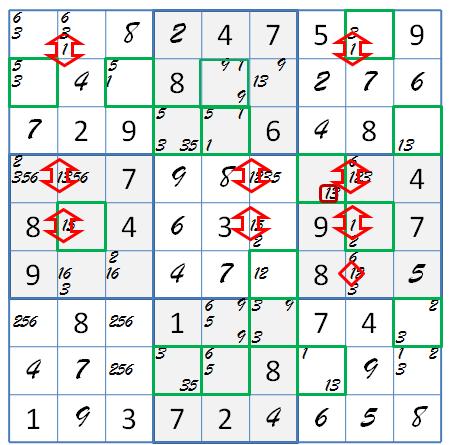 After an ordinary ( merely 6-link )  XY ANL, book 4 #5 continues with the twin fireworks display , shooting off two finned swordfish in a row.

A finned fish victimizes a candidate that sees the fin.  This is obviously the case when the victim candidate is in the box containing the fin.

Ever pulled one in and have another one jump in the boat after it?

As if that were not enough, this puzzle produces an eliminating ANL and a confirming ANL on the same XY-chain.

There are several more unusual combinations I could show, but I’ll be satisfied to conclude with the book 5 fish.

The puzzle was nearly solved when it came up with this eye opener.  A very respectable XY-chain ANL is trumped by a double fin X-wing removing the same candidate. When it comes to substituting their position for the victim’s, thus preventing its removal, two fins in the box are no better than one.  It the victim is left in place, it removes two fins as easily as one.

So in the KrazyDad world of extraordinary events, what  would pair with a double fin X-wing?   A kraken X-wing? Coming right up. 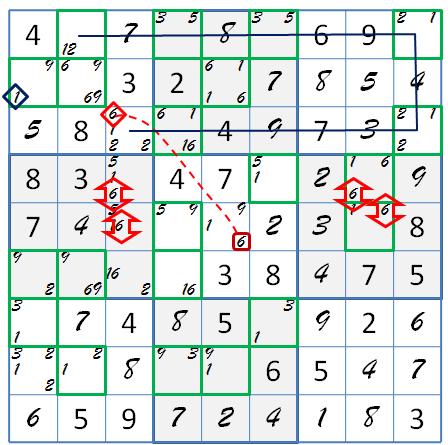 In this grid from book 5, in red, is our kraken 6-wing, where the would-be victim sees the fin through the ER periscope.  As an added attraction, we get a remote pair, in black.  It’s more decisive than the kraken.  Did you notice that it extended to five pairs, and the kraken removal extends it to six? No consequences, though.

As I’m linking back into advanced method posts for new readers, I’m thinking how I had to search to find good examples, when I could have just hung out at the drugstore in Super Tough village.  Thanks, Jim.

OK, I know this is getting long, and it’s time to go, but just one more krazy koincidence.

First, yet another orange ER 139-wing removes an indecisive 9-candidate. Then a red 98439-chain ANL removes  another,  in r9c3. But then, a blue 58375-chain ANL removes a second candidate in r9c3, which telegraphs its death message to another  5-candidate via a grouped AIC  line. This candidate in r8c8 promptly  expires upon hearing the sad news.  All sysudokies stand and salute!

I know you’ll be shocked to learn  that I mistook a side marking in two cells for a box slink and erroneously concluded that ST 5 8 5 solved in box marking!  Yes, I accidentally hit on the solution, like trial and error solvers often do.  It was only when I repeated the steps to convert the trace from 1D to 2D did I realize my mistake.  Tracing is tedious, but it has its benefits.

I reluctantly conclude this review next time, with a blow by blow on Super Tough v.5, b.8, #5. Have your version ready!