This post completes my analysis of Paul Stephens advanced solving instruction in his current books, covering his “extreme” sections. Paul’s descriptions and examples are evaluated from the sysudoku perspective.

Let’s start with another look at Paul’s preview for his Week 48 puzzle, in Mastering Sudoku Week by Week.  Paul said “Gridlock can be broken with a Swordfish, two non-unique rectangles, two XY wings and a forcing chain – or a six-square conjugate pair chain that solves three squares instantly and leaves the rest solvable by simple methods.”

So far, I found the rectangles, and one XY wing, along with much longer XY ANL.  There was a helpful  X-wing uncovered in marking the URs, but the puzzle collapsed before an X-panel was prepared for regular fishing.  There went the  swordfish.

Although I used forcing chains on Week 48 to analyze a Sue de Coq and to implement an ER XYZ-wing,  these could not be the forcing chain of Paul’s preview, because SdC and ER are not covered in the  Stephens books.  So what is a “forcing chain” in Stephens speak?  This question sent us looking in Weeks, where we got a jaw dropping answer.

The long blue XY chain of the previous post, that I identified as an eliminating almost nice loop is Stephens’ “forcing chain”.  Stephens tells us that a nice loop of XY cells that “doesn’t end right” is a forcing chain. To explain this, Paul offers this example:

Paul attempts a nice loop, which he calls a “forcing loop”, starting with the 5-candidate in r4c6 (A). He gets around to the point of linking the c5 squares (E), and draws the conclusion that the “forcing loop” (what he calls a sysudoku  confirming ANL) is not going to end right. He then “tries” 5 and 9 (A), tracing his way to the conclusion that 9 in r9c6 is removed in either case.  As shown below, these traces are forcing chains, but Stephens has no name for them. 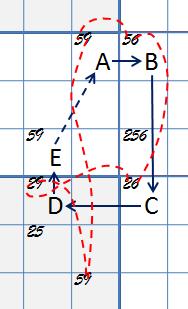 Compounding  the confusion,  Stephens points out that the same removal can be done by  tracing both candidates in square C. In fact, he is echoing Andrew Stuart’s digit forcing chain, which I revealed to be a redundant and miseading re-interpretation of the almost nice loop, which Stuart had at least covered.  Why not point out that the forcing chains can be started from squares B, D, and E as well?

When you display the internal bv links and view the XY chain properly, as we have here, it is clear that Stephens’ example is a quite ordinary almost nice loop, with toxic end candidates eliminating the 9 in r9c6. It is not a forcing chain.

Paul Stephens is confusing many with his muddled definitions of nice loops and forcing chains.  Forcing chains apply to alternate inference chains of all kinds, and to many techniques.  His definitions limit them to bv cells.

OK, getting back to Week 48,  guess I found Paul’s “forcing chain” after all.

To review:  Since slinks can be interpreted as winks(weak links), slink chains are alternate inference chains defining toxic pairs. Slink loops make nice loops or almost nice loops, depending on the odd or even number of links.  This creates interesting situations I covered earlier with X-chains.

Slink networks are the basis of coloring, in which we extend a network in every direction and call it a cluster. In the Medusa coloring endorsed in sysudoku, we use bv internal slinks  to extend the cluster over multiple numbers.

So now we know what Paul means by a “six-square conjugate pair chain” solving 3 squares. Can we find it? Maybe, but while we’re on the subject of coloring, let’s look into the Stephens multi-colouring,  Types 1 and 2.  Stephens describes “multi-colouring” as an interaction of two unconnected, but related conjugate pair chains.  This would make it the bridging of clusters.

Type 1 is a color trap of one cluster color seeing both colors of another, and therefore promoting every member of its opposing color into a clue. In the left panel extracted from Stephens’ example in The Sudoku Addict’s Workbook, blue candidates see both red and orange candidates, making all green candidates true.  By the way, representing the seeing by winks, we see an almost nice loop confirming the green candidate, with the same result by X-chains

Type 2 occurs when candidates of color A in cluster A/B sees color X in color XY, invoking the logic: not (A and X)=> B or Y, making B and Y a toxic pair of colors for all other candidates.  The X-chain version of this example is a skyscraper, one of the best known of X-chain formations.

In the last paragraphs of Addicts, in a section mistitled “Nice Loops”,  Paul finally acknowledges that weak links exist,.  He calls them  “forcing pattern connections”.

Then he presents this “discontinuous nice loop”, but omits the three internal slinks, and the internal wink that demonstrate that it is an AIC nice loop.  He thinks of links as being between squares, and attaches a candidate number to each link.  This makes it difficult to see the pattern as an almost nice loop confirming 6 in r1c1. Instead, Paul  starts a forcing loop by saying, “if r1c1 is 1”, and traversing the loop, arrives back in r1c1 saying “then r1c1 is 6”.  The contradiction tells him that r1c1 is not 1. Paul should just learn how a confirming ANL works, and stop traversing loops when he encounters one.

As in basic solving, Paul Stephens’ version of advanced solving has little to offer  sysudokies. The study of his words and his puzzles pays dividends, however,  as my next few posts will show.

Now that we know what to look for, let’s see if we can see what Paul Stephens saw in Week 48. We’ll skip the bv scan techniques, except for the UR eliminations, and their marking, which included the 8-wing. So crank up your X-panel, and cast your line for that swordfish.