This post begins the Sysudoku review of Jim Bumgardner’s toughest collection, the Insane level,  with a demonstration of cluster extension in Medusa coloring, via Limited Pattern Overlay.  The post was updated in 10/18. The first review puzzle is Insane v.4, b.1, n.5.  That is to say, volume 4, book 1, number 5. The vast collections on krazydad.com require that kind of puzzle numbering.  For short, let’s call it Insane 415. I will take up the volume 4, number 5 puzzles from books 1 – 10 in order, and wind up with a review table at the end.

In KrazyDad’s Insane collection, you will consistently find truly difficult puzzles.  Jim says they cannot be solved without guessing.   But since sysudokie definition of solving includes trial, but not guessing, the review became a friendly contest to find logical ways to solve these puzzles. The struggle proved especially valuable in revealing how coloring and pattern analysis can be combined, with many illustrations for the Sysudoku Guide.

Let’s start with the basic solving on Insane 415. You can and should get the puzzle on krazydad.com.

Line marking starts with a helpful 5-wing. The wing has no immediate victims, but is left in place to claim rows 3 and 7 for 5’s.

After line marking, no progress was made in the bv scan, but the X-panels reveal two 5-patterns that form a coloring cluster.

This, and the general imbalance of candidate values across the panels, suggest pattern analysis.

On the 7-panel, freeforms South to North divide the patterns into a single pattern from r9c4 and three from r9c2.

Only one coloring of the 7-patterns is compatible with the blue/green coloring of the 5-patterns. Since neither of these panel observations separately make an elimination or confirmation, the Sudokuwiki solver ignores them. That’s the way computers play chess, as well.

Combining the compatible coloring networks of the 5 and 7-panels in the only possible way,  the extended cluster  traps three candidates and generates three clues.

Combining the compatible coloring networks of the 5 and 7-panels in the only possible way,  the extended cluster  traps three candidates and generates three clues.

After some follow up marking, there is an extraordinary series of irregular XYZ-wings. 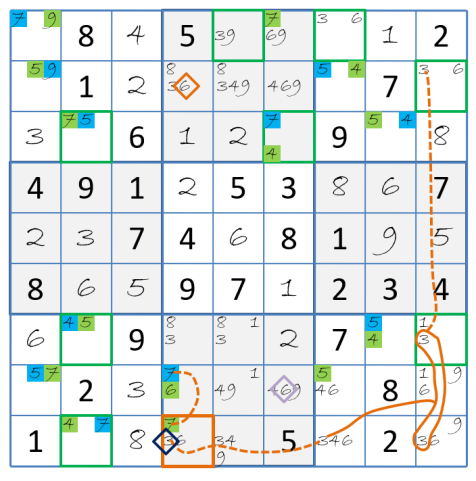 The first one appearing in the XYZ map is this X-chain constructed 136-wing.

A grouped forcing chain attaches the 36 wing in r2c9, and the wing removes the 6-candidate in r2c4. The removal generates a boxline in Nc6 removing the 6 in r8c6. This makes 6 in r9c4 blue, , trapping the 3 already removed by the new naked pair c4s38.

You don’t spot these things.  Step by step, looking for the next required thing, you construct, then discover them.

Maybe you’d like to discover your way to continue the series and finish off Insane 415 from this point.  Without guessing of course.  Details next time, along with Insane 425 which you may want to tackle first for yourself.

On the way out, here is the basic trace on Trickiest Beware 141.  In this update from October 2018, Will Shortz fans get  the bypass, box marking and line marking.  The Guide or the Traces page can update you on the conventions