In this revised post, difficult line marking leaves a semi-monster. It is whittled down to a decisive double ANL, which can be duplicated instructively by pattern slicing.  The review puzzle, Insane volume 4, book 4, number 5, with thousands more, is available at www.krazydad.com . 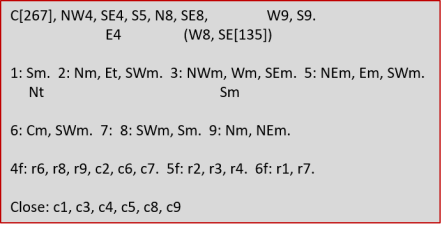 The updated basic trace leaves two unresolved box 3-fills in the bypass.The bv in the Southwest signal a lot of possibilities.

On the line marked grid, the preponderance of candidates {12367} is striking. The bv in the Southwest signal a lot of possibilities.

Interesting but useless, is a classic, but dead 5781 wing. Put a closed curve around it, and it’s a 4-set BARN or BNS1, likewise with no victim.

But the bv do produce an APE, limiting cells r9c13 to

Or, the same effect is achieved by an XY wing or an enclosing 3-set BARN. Or how about another hidden UR? 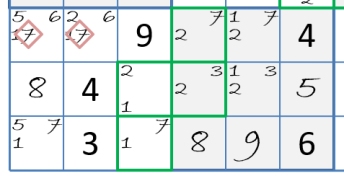 Now, on the X-panels, a grouped 3-chain comes first. 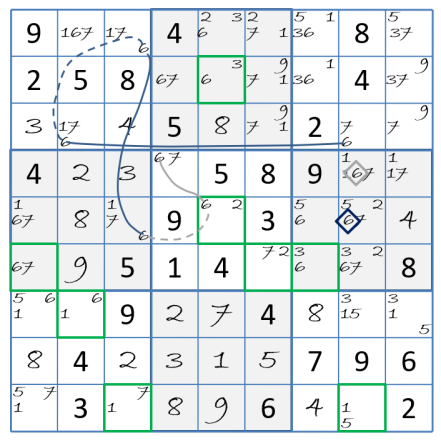 Then a 6-ANL, plus extension to another, triggers a collapse.

However, for the Guide, Insane 445 has something to say about pink olive collectors and trials.

A pink olive collector is a cell that all freeforms of a color must cross.

Now on r5, the alternatives to c7 must cross r3 at c8, a column already taken, therefore r5c7 is an olive collector.

Since r5c3 is a pink collector, the alternatives become orphans, 6r4c4 is confirmed as placement C6, which is enough for the collapse.  But in the pink/olive, the collapse is the result of a trial.  If the olive pattern is not true, two pink patterns remain. The trial proves them false.

Four down without a guess!  Only an unnecessary, but instructive trial. The Insane review continues next week with Insane 455. Look it up on KrazyDad, work out the basics and be prepared to drag me out!