This updated post shows how pattern slicing, a theme in the Krazy Dad Insane review, fails on the v4, book 7, n5 puzzle. The fall back is a Sysudoku trial innovation, the Single Alternate Trial Sue de Coq. The method, and trial logic in general is introduced here. 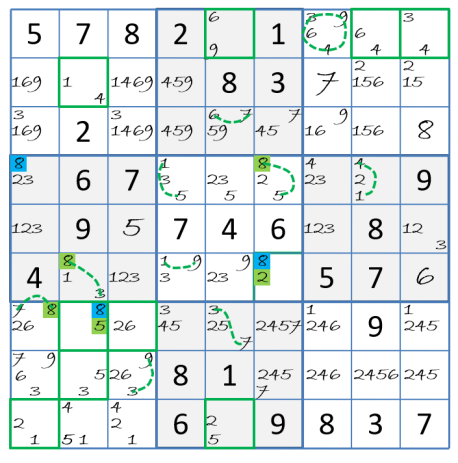 The previous post, the updated  9/3/13, reported on the solution by Andrew Stuart’s Sudokuwiki solver. The solver turned up many tough, but humanly feasible AIC builder eliminations, but to reach a solution, turned to cell forcing chains, a technique beyond human patience. So at the grid state of the first cell forcing chain, we consider pattern slicing and other trial alternatives

For pattern slicing, 475 has promising freeform starting lines, but too many patterns matching them.

The 3-panel is an example. The four panels demonstrate  pink and olive patterns  further divided by restrictive cell shadings in the pink/olive maps. Pink freeforms are restricted to r4c7 and olive freeforms, to r4c45. 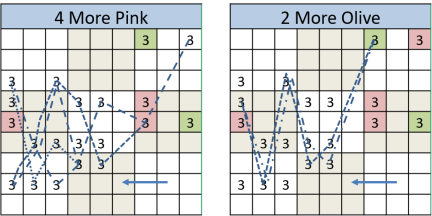 Then r5c5 gets its turn for pink freeforms, and rows 6 and 7 interchange on olives.

The ability to duplicate map panels helps. It also helps to offset freeforms for better visibility. 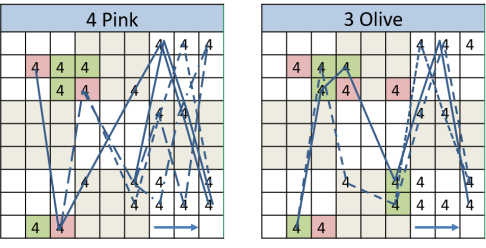 These examples also illustrate how restrictions assuring a match with the starting lines are held to a minimum, to avoid missing patterns. 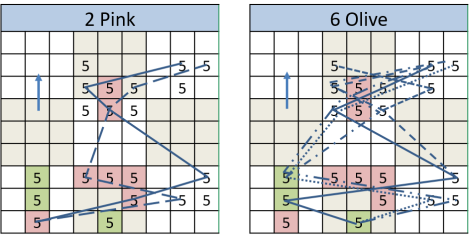 The 5 panel is the third and last having promising starting lines.

No pairs or singles have emerged, and its time to look for alternative trials.

Pattern trials are suggested on candidates common within pink or olive sets when the number exceeds two. Also, numbers of patterns of each value are too high for too many values for LPI conflict enumeration. Both strategies will be illustrated elsewhere. 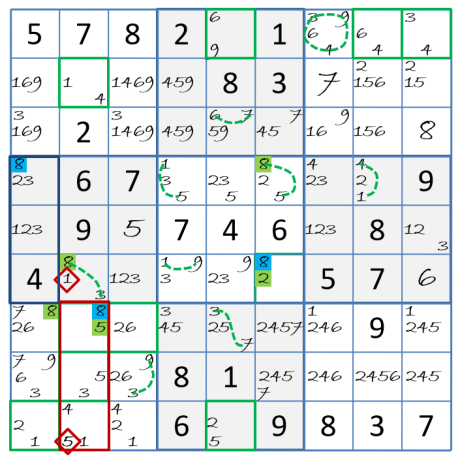 There are two Single Alternate Trial opportunities on the grid of Sudokuwiki’s first cell forcing chain.

The trial determines if 1 and 4 are missing. If that brings a contradiction, then the first term holds, which is the logic of a Sue de Coq. In that case 5 is removed, to allow one of 1 and 4 to be present. The removal leaves a naked pair 14 in c2, removing 1r6c2. That removal creates a second bv for a Sue de Coq in Wc1. 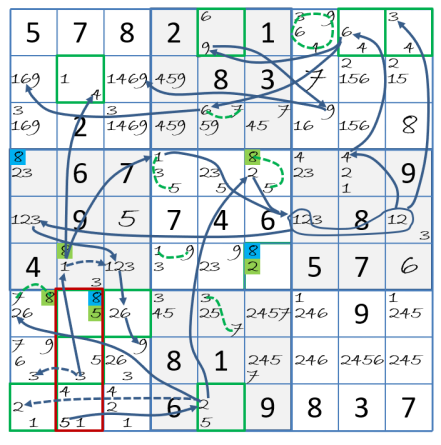 In the trial, the last term is verified to be untrue.  A trial trace, as described on the Trials page, is generated. Then the evidence can be displayed drawing in arrows for the inferences leading most directly to the conclusion.

It’s far from direct in this case, finally arriving at two 9 placements in c3. 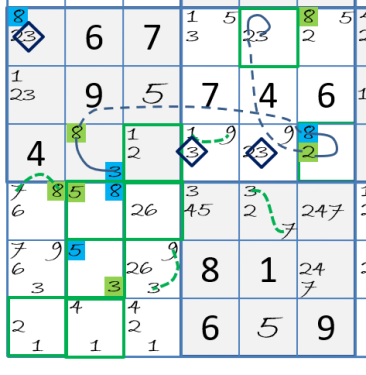 A naked triple and 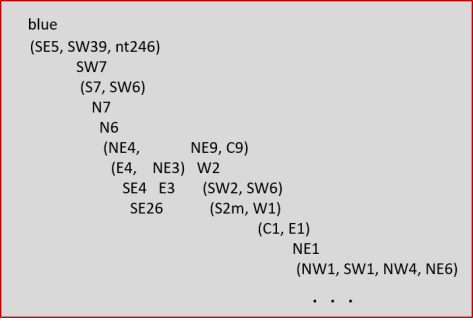 Now you might be thinking that the trial that enabled the Sue de Coq, or the trial that would have completed it as a Single Alternate SdC, are as impractical as the search for cell forcing chains that they avoid.

Consider these two facts, however:

As the cell or unit forcing chain search is underway, the likelihood is that it does not exist.  Many cells and units of 3 candidates are to be explored, with this knowledge.

On the other hand, progress toward a certain goal is evident in every step of the trial. Either the extra term will be rejected, and the reward seen before searching will be achieved, or we will very likely stumble on the solution.

Of course, finding a solution by trial is not as satisfying, and we do it reluctantly, hoping to find a logical key to the puzzle later.

Next post, we do Sysudoku basic on Insane volume 4, book 8, number 5, then explain conceptually what the Sudokuwiki solver does with it, which is remarkable. This update corrects the original post. When the solver gives up, an equally remarkable pink olive pattern analysis sets up a three phase trial for the solution. The previous KD Insane review posts build up to this pattern slicing triumph.