Insane v.4 b.8 n.5, the eighth puzzle of a review of the KrazyDad Insane collection on www.krazydad.com, defies Andrew Stuart’s Sudokuwiki, and requires the trial of a pattern sliced cluster to be brought down. But it survives long enough to add a new type of AIC ANL to the Sysudoku tool box.

The basic trace signals trouble ahead. It’s too simple for comfort.

But actually, the line marking was not that hard. See the line fill strings on the grid below.

The 2019 update differs substantially from the original post. The review discovered a simple error that completely changed the  solution path, but miraculously arrived at the correct solution.

The update uses Andrew Stuart’s Sudokuwiki to check for errors and omissions.

Instead the 6-panel keeps us interested with this little slink chain interpreted as an AIC.

Leaving from 7r5c7 a 7-chain goes through three AIC hinges to become a 9-chain back to the starting cell 9r5c7.

Then with a modest extension, the boomerang gobbles a second candidate in the starting cell.

Using part of the AIC a third time, Sudokuwiki comes up with one of Andrew Stuart’s Sudowiki.com strategies, the digit forcing chain. Sudokuwiki plays it three times, using 7r1c3 as the starting digit.

Actually, this is an AIC ANL with an ALS value group (see the Guide) and one of its members as the chain terminals. Can you see it that way?

In an early post of 11/06/12, Stuart’s digit forcing chain is revealed to be another name for an almost nice loop, a concept soundly explained, and so named, by Andrew Stuart. The “digit forcing chain” comes from the spotting practice of picking a digit along the chain, then developing an AIC in both directions. On his Strategies page, and in Sudokuwiki messages, Andrew Stuart suggests selecting a digit along the chain, as if it matters. In the ANL above, there is no starting digit.

Worse, selecting a digit and going both ways without knowing it’s on an ANL is just guessing, a beginner’s tactic ultimately doomed on hard puzzles.

For spotting the above type of ANL, the slink from a candidate member of a value group out of the ALS is a good spotting signal, in AIC building. If you can continue the AIC to a candidate seeing another value group you have confirmed the logical conditions making the value group toxic. As a name for this ANL type that suggests this spotting tactic, Sysudoku will call it an ALS boomerang.

Getting a 9-group, but no clue from the ANL above,  Sudokuwiki puts on a good show without it, starting with this naked triple and NWc3 boxline, but bogs down later.

Next is an update example on the unique rectangle. It’s a relatively new type, named in Andrew’s Strategies as Type 2b. When a naked pair in two boxes is part of the rectangle, and one of them is slinked, then the other UR value in the extra’s corner of the opposite side must be removed, because it forces UR values into opposite corners, where they can just be swapped for another solution, without the remaining cells of the puzzle being affected.

Andrew’s Type 2 and Type 2b are described in the Guide.

Before Sudokuwiki runs aground, it produces three gems we wouldn’t want to miss. First is this grouped boomerang.

We call it grouped as if the grouping is intentional. But remember, in AIC building we start with any slink emerging from any cell, 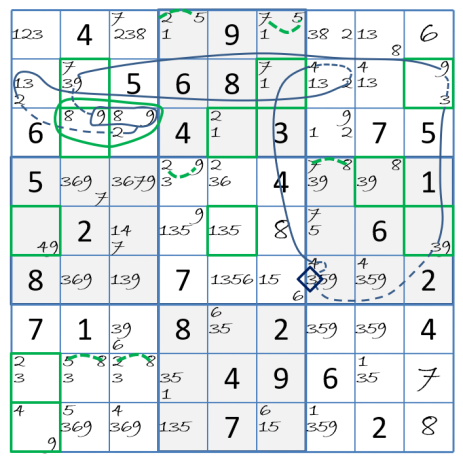 and take anything to keep it going until a slinked endpoint sees any other candidate in the starting cell. The 8 group is just a way slink away from 8r3c7.

Here’s the icing on the cake. We’re set up for an ALS toxic set of three 9’s, produced by two ALS with two 5 value groups in restricted common. My pal Gordon Fick would have spotted this, but it might be beyond anybody else.

At this point Sudokuwiki announces it has run out of its creator’s strategies. Here is the grid it leaves us, with a modest blue/green cluster. It would be instructive to go into AIC building on the line marked grid,  to see how many of the AIC you would come up with. 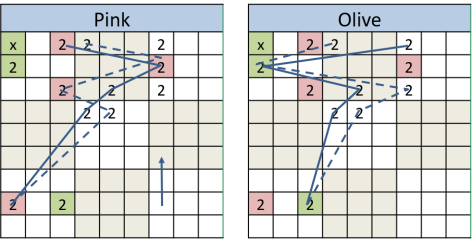 One advantage of choosing two of four patterns that don’t interfere is the traps on the patterns not selected. Another is more related candidates on trial. If one of the patterns is true, the traps are valid.

We use red for pink, and orange for olive, because we are using coloring properties of the paired panels.

The immediate effect of the traps here is a naked triple in r1 and a naked pair in r3.

Also, by the way, this trial option includes one of the 9 placements in the ALS 9-group of the ALS boomerang, the 9r2c9.

After expansion of the red/orange cluster, orange is wrapped logically. It is shown to remove all 6 candidates from r4.

Then with red taking over, green is caught taking all 5’s from the East box. The collapse into a red. white and blue solution is immediate, if a bit late for the 4th. It’s customary here to use pencil marks in the center to represent clues in a trial.

Without guaranteed uniqueness, a trial of the dashed pink, solid olive pattern pair would be warranted, But Sudokuwiki has already run the exhaustive search to guarantee the unique solution.

Next week in the updated review, we get more extraordinary examples by finding out how Sudokuwiki would have fared if it had found the clue in the ALS 9-group of the ALS boomerang.