The Sudokuwiki solution of Insane 485 is reported, starting with the ALS boomerang, but with an extra clue provided by a rare pattern trial. It so happens that one of the two candidates of the ALS 9-group belongs to only one 9-pattern. With this the trial’s clue,  the solver finds the way without pattern analysis.  Its path can be shortened by turning up the coloring. 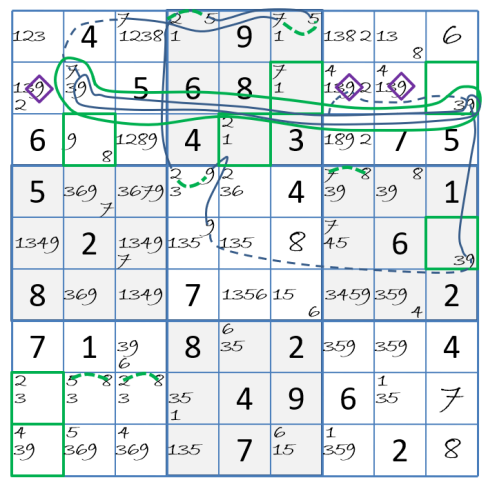 Here again is the ALS boomerang ANL with slink chain terminals 9r2c9 and the 9 group of the ALS. At least one of the terminals is true.  The value group is true, by the logic of the previous post.

The ANL allows either, but in the last post we learned that 9r2c9 is NE9.

A trial determined that 9r2c2 is not proved false by a spottable contradiction, but the 9-panel at this point  brings a big surprise. Take 9r2c2 to be true and start eliminating 9’s. It leaves only a single pattern. If 9r2c2 is true, so is that pattern.  Carry out that trial, and you can see why Insane 485 is so insanely hard.

The trial is easy, and would have definitely arrived at the solution if 9r2c2’s pattern were true. As it is we continue with a Sudokuwiki second chance solution within human limits.

The naked triple and hidden UR 2b of the last post are not affected, but a new AIC boomerang appears.

Then a tight AIC boomerang on the 5’s,

is followed by a grouped 5-chain ANL,

then an ALS node confirming ANL.

gets to a Bent Almost Restricted n-set (BARN) with n = 4.

Next, a rectangular AIC boomerang. You have to practice long and hard to make it do that.

The 3r8c8 removal permits this APE, by which combinations 13 and 35 are rejected in the targeted pair of cells.

After one last AIC ANL confirms 3r9c7 as SE3,

Sudokuwiki finds a simple coloring trap at 3r4c3, and a regular 263-wing. The wing removal triggers a Wr6 boxline.

Rather than picking off one candidate at a time, I’m ready er to grow a coloring cluster in the bv space.

On the trail of a wrap, 6r4c5 is the first trap. Then a simple XY-chain expands the cluster.

and confirms NW1 and S1.

The growing cluster and bv field are another form of collapse. Sudowiki marches on through two more XY chains after this one before its singles collapse begins.

But coloring suffices, as trap r8c3 turns 3r6c2 blue and 9r6c2 green, wrapping green and duplicating the ending brought on by pattern slicing in the previous post.

Next post, we learn more about ALS boomerangs and patterns from a Sudokuwiki encounter with KrazyDad Insane 495.