4X5 Holds Off LPO for a Pattern Trial

The KrazyDad Insane review now ends with another puzzle that frustrates Sudokuwiki, and drives me to a pattern trial. Fortunately the situation calls for the Limited Pattern Overlay process that I passed up in the update of Insane 495. LPO doesn’t handle it, but the analysis that sets it up can be invested in a pattern slicing trial that does. 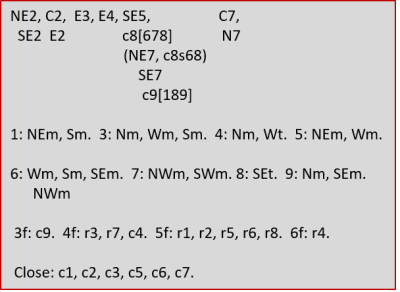 Here is the basic trace, showing a bypass that is generous by Insane standards.

Line marking is predictive, with heavy line fill strings and a dark cloud of 89’s. 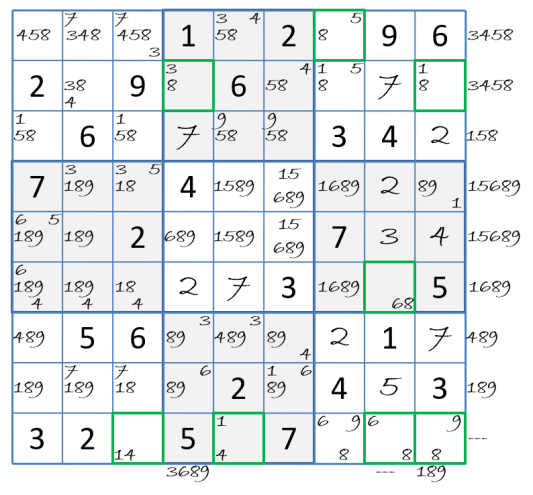 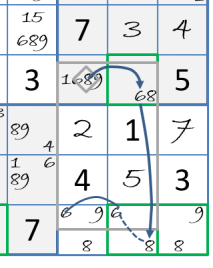 The Southeast corner has a little daylight, and a Type 2b unique rectangle. The key feature is the floor to ceiling 6-slink between two corners. Because of it, 8r6c7 forces 6’s and 8’s into opposite corners, where they can be switched for a second solution to any solution containing them.

You’ll need some directions on the series of boomerangs on the grid below. 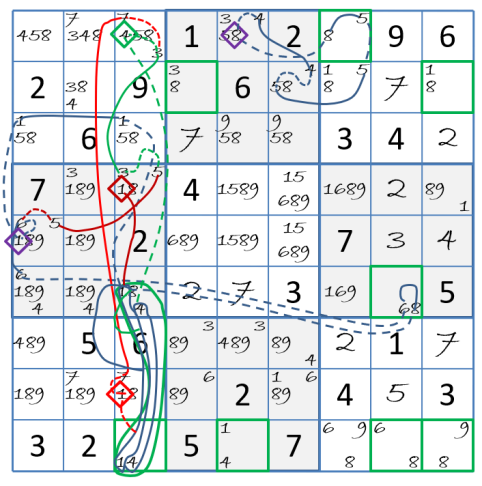 Start at 6r5c1 with the slink, and follow the chain to the 8 in the green ALS 148, the ALS 1-group, and the 1-chain back into r5c1, completing the first boomerang.  Then from the start, back up a wink and a slink in dark red, to 5r4c3 then take the same chain around to  the ALS 1-group, but branch off (dark red) to close bring home the second boomerang. Then back off another wink and slink to 3r1c3, and crank forward. When you get to 8, slink off to the 4-group and come back weakly to 4r1c3. Yes, the 4 group is on the path going and coming. It’s OK. The inference goes through twice along different paths without reliance on whether the 4-group actually is true or false. If you’re still with us, back up once more to 7r8c3 and re-use the route to the 1-group, which is toxic to 1, for the fourth boomerang on the same chain.

By the way, did you see the boomerang in the N and NE boxes?

It had to be. KD Insane 4×5 had to have an ALS boomerang.  For some reason, the Sudokuwiki code calls out only one of the victims, but they both see the toxic set of the ALS 8-group.

Anyway the solver throws in the towel. The three humanly practical areas where Sysudoku regularly goes beyond  Andrew Stuart’s humanly oriented solver are inference chain XYZ-wings, pattern analysis, and trials.  Here is a second opportunity to use LPO, our version of the Pattern Overlay Method.

A word about POM. It’s ignored today, not because it doesn’t work, but because, like the recursive procedure in regular use for puzzle validity checking, a listing of solutions is its only result.  Limited Pattern Overlay at least offers some rational narrowing of the space of solutions. 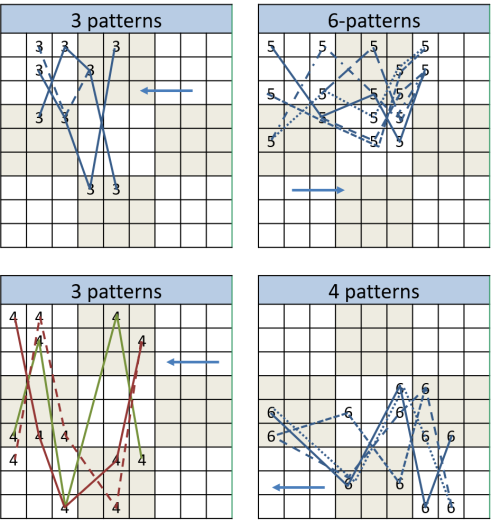 Here are the four freeform panels chosen for LPO on Insane 4×5. The 7-panel is left out, because it offers little conflict with other panels. The task is to determine which patterns are impossible because they impossibly restrict patterns of other values.

The evidence is before your eyes, but the problem is to organize what you see. Essentially we must identify every pattern conflict, and file this information in a manner that signals when a pattern conflicts with every pattern of any other value. The two patterns of the 4 7-candidates are left off the LPO list because, it is quickly confirmed that both are not in conflict with any of these patterns. 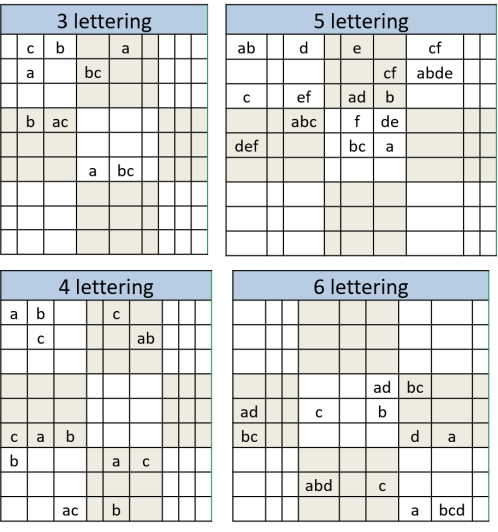 The next organizing step is lettering. Each  pattern of each value is assigned a distinct letter. There’s no preferred method for doing it. Check that every row, column and box contain the same letters. 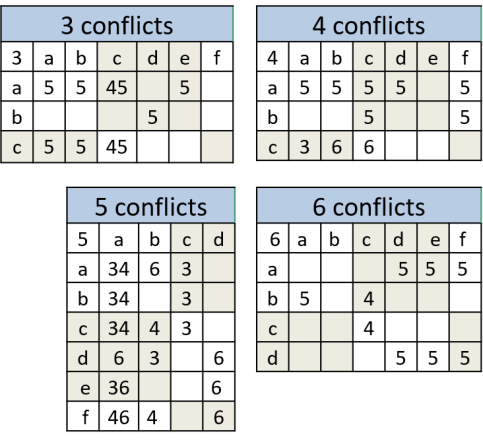 Now for each value, we scan the lettering tables of the other three values for conflicts with each of its patterns. The conflict tables are prepared by listing the pattern letters of the value under the value in the left column, and listing the possible letters of other values in the top row, with the value.

For each pattern letter, record on its pattern row the first conflict with a pattern of another value by placing the other value on the row under its letter.

That is the available data. The question is, which patterns, if any, are impossible?

There is another way to read the conflict tables. Every cell of the offending pattern’s column in the offended value table contains the offending value.  In this case, pattern 5c conflicts with two of the three 4-patterns, and 6c conficts with the third. Not enough to eliminate 5c or 6c.

It’s not enough, also that the 5a pattern’s row contains all three of the other values. These conflicting values do not necessarily represent true patterns.

So, a lot of organizing for close to nothing. If we put 4a on trial, we could include 5e with it. We can check how that would have gone when we get a solution.

Moving on to a pink olive analysis, I pick the the 4 patterns, with two pink and one olive, and decide to put the two pinks, 4a and 4b on trial together. If I’m stuck with 4a with 4b eliminated, I can add 5e. 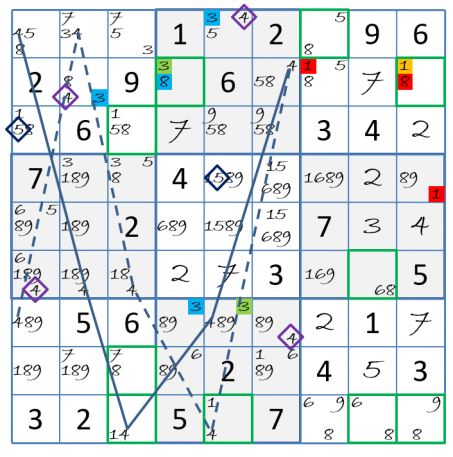 Here is the trial set up for the 4a and 4b trial. The four orphans belong to 4c. From the conflict tables, patterns 5c and 5f are eliminated on r2c6, creating two orphans.

A purple/aqua cluster in the 4a and 4b candidates expands to 5-candidates, and creates a bridge wrap. In r1 aqua sees green, therefore we cannot have aqua and green. And in r7c5, purple sees green. No purple and green. The only way this works is to have no green. Green is wrapped!

The wrap marking continues this way, reaching a contradiction of two 8’s in r7. After aqua is wrapped. That establishes 4c as the true 4 pattern.

It’s now solution in progress, no longer in trial. 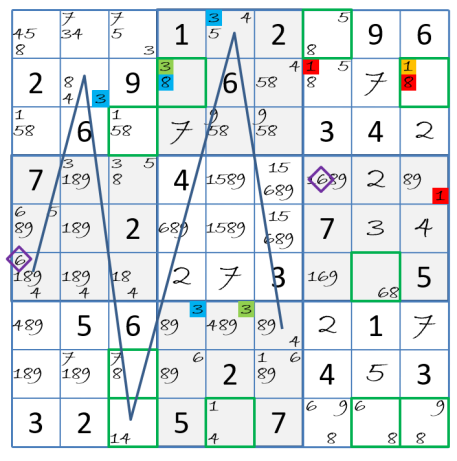 The marking wraps blue and stalls. 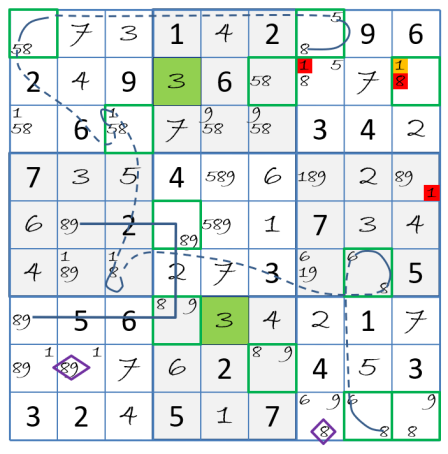 A remote pair and a long XY chain bring the final collapse, traced below.

KrazyDad Insane v.4, b.10, n5 closes out the many pattern analysis examples of this review in a satisfying manner

Next time, an updated review table and parting thoughts on the review. 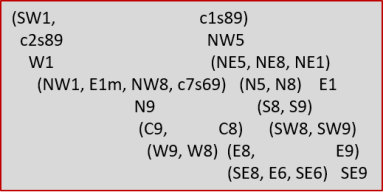 From here to the solution: