Here’s my report on the second successful Sudoku tournament put on by the Akron-Summit County Library.  Yours truly didn’t complete a single puzzle in the contest, but I renewed acquaintance with some phenomenal solvers.   I’m including a trace and checkpoint diagrams for solving the 2013 championship puzzle.  The three finalists went head to head on stage.  You’ll find more pictures and performance details at ascplpop.akron.library.org  . 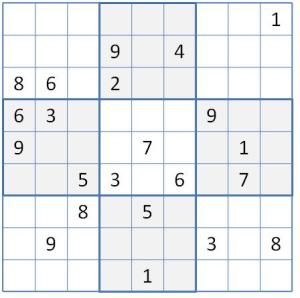 All tournament puzzles were provided by Will Shortz, along with some guidance on conducting such a tournament.  The championship puzzle, shown here,  is solved by a very challenging box marking.  The solution depends heavily on slink marking, demonstrating that my phenomenal fellow contestants, who make no pencil marks, are carrying this information forward in their heads.  They might find it interesting to follow the trace of this post and compare notes with the situations they recall in solving this puzzle.  We would treasure their comments on this comparison here. It might give the rest of us insights on how they do that.

Of course there are many solving paths, especially as the puzzle nears collapse. Just bear in mind that the trace follows rules that reduce multiple paths to one, so that my readers can have a direct comparison with checkpoints in this blog. So my trace is not a suggestion that this solving order is better than any other.

One obvious ordering rule is that my box marking takes up numbers in 1, 2, 3, … order, wringing every available strong link out of each number before going to the next.  Not the best plan in a time contest. In the trace, the effects of a cause are the item or list indented below it.  Also note that the trace is depth first, recording every effect descending from each new cause before moving to the next.  Again, too rigid a plan for a time contest.

Finally, if you haven’t been reading these traces, you need to know that a trace item gives the box location and mark of each effect, but says nothing about the reason for it.  Updates of the existing marking are not noted.  Unless you keep the current state of the puzzle in your head, which would not surprise me,  you need to update the state on a fresh copy of the puzzle as you read the trace.  The notations should be apparent, but if not, there’s always the traces page. 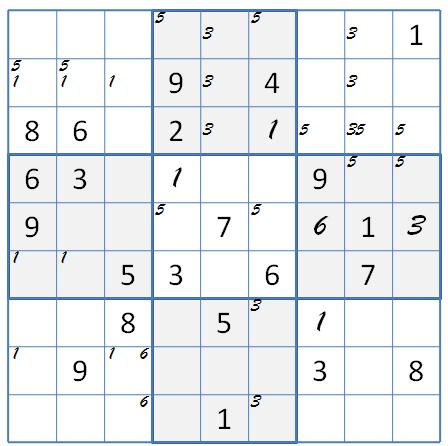 This is rather stingy for a time contest puzzle, but in your less hurried moments, could you get more out of the first six numbers.  If so, is it all logically justified?

Marks at the top are box  slinks(strong links).  Aligned triples are marked because they reserve lines for their numbers.

Check out your  mental duffle bag.  Are you carrying all of the pencil marked  data in your head?

Still reading the trace OK?  Did you ever wonder if basic solving could be written down and then read?  You’re seeing it can be done in a practical way, once you realize what to leave out.

The pencil marks at the  bottom left corner signal row slinks. Those on the bottom right, column slinks. Some cells now have all their candidates, including those across the middle that are not slink partners.

You might wonder why we go no further than two free cells per line.  It’s because sysudokies shift gears into a second mode, line marking, to find all remaining candidate most efficiently.

Ready for number 9?  It’s something else.

Here we have nothing more from the 2 slink marks in the SW box, and we return to the East, row 4 naked pair 45 and follow down to the naked pair 67 in the South box.

Along the way, the listed causes after the first have no further effects, but there will be plenty when we follow up the 2-clue in the West box.  Note the many places where progress is hanging by a thread.

In fact look at the very first cause.  The effect which generates the above trace depends on our recognizing the naked triple 579 in NEr3.  Our “no pencil marking” friends have to do that.  My hats off to them, but I’m not trying it as I write this blog.

Moving on to the effects of W2, I continue to follow a single cause and effect thread down to its end at the naked pair 26 in the SouthEast Box.

Now I realize that the puzzle is beginning to collapse at last, and I’m just hoping the bell does not ring as I start in on the effects of the new SouthWest 6-clue.

The bell remains quiet as I slam my marker down on the board tray and turn to the audience, bowing as the applause and cheers burst out of the library auditorium and roll down the hall to the front desk, causing Saturday patrons to look up in alarm. 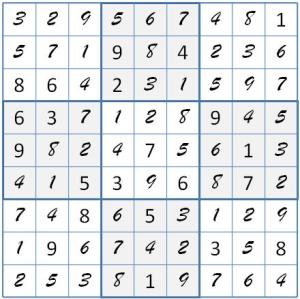 Well, thanks for sharing my daydream.  Regretfully, I had no encounter with a blog reader, but maybe next year.  Hit the Akron-Summit Library link next year in mid October for an announcement of the third annual Akron Sudoku Tournament.

Next post, I get back on the trail of human engineered solving methods capable of bagging super exteme puzzles.  I’m onto something, but I have a lot of explaining to do.  Stay tuned.

I'm John Welch, a retired engineering professor, father of 3 wonderful daughters and granddad to 7 fabulous grandchildren. Sudoku analysis and illustration is a great hobby and a healthy mental challenge.
View all posts by Sudent →
This entry was posted in Basic Solving Procedures and tagged naked pairs, pencil marking, slink marking, Will Shortz. Bookmark the permalink.