This post extends the proof of the rank theorem to the rank = r >0 case, and finds a sysudoku interpretation of a rank 3 removal from the General Logic page of www.SudokuOne.com .  The method is Andrew Stuart’s cell forcing chains, judged earlier to be impractical for human solving.

What this means in the plumbing example of last post, is that the orange candidate 5 is in no base set, but is in four cover sets.  To check this, we start  with  SudokuOne’s 2-D representation of the rank 3 removal example. 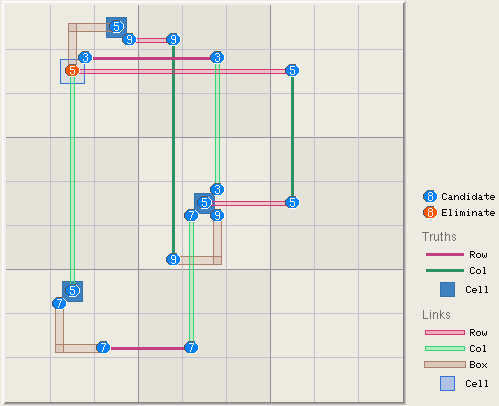 Despite the keypad marking, we can tell from the base and cover sets chosen which sets are slinks, and which cells are bv, although other candidates are not identified. 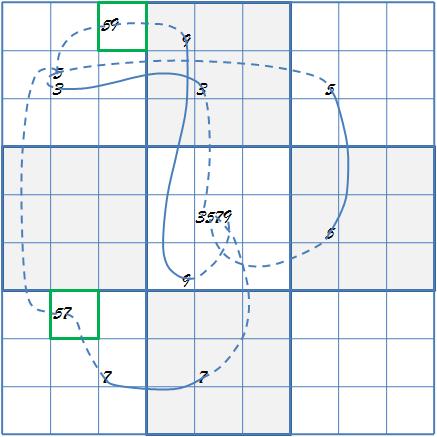 Actually, the array of slinks one wink away from the r2c2 5-candidate suggests another reason for its removal.  It is a beautifully simple case of a quadruple cell forcing chain.  Left in, it forces out all four candidates of r5c5.

I rejected searching for such cell or unit forcing chains as a human solving method in earlier posts.  The example doesn’t increase my confidence for a human’s finding this removal by the rank  method.

The next post shares  my observations on how an extended form of rank theory called link  set theory is applied to the solution of the Golden Nugget.  As a preview, you might tackle Part 2 of SudokuOne’s “General Theory” page.