This is a report on the first three of the six possible exocet trials of the Golden Nugget based on the exocet verification and pattern data of the previous  two posts.  The trials demonstrate how properties of the exocet formation may be applied to other monsters.  The enumeration of the 30 2-patterns, and Sue de Coq verification trials, both developed earlier in this blog, are important elements in these trials.

Merry Christmas!  I hope you found time to work from the last two posts toward a solution, and make some of the same discoveries you find here, if not all. I’m going through the exocet alternatives in the same order:  12, 14, 17, 24, 27, and 47. I can say that you have but one more week to find a sysudokie solution of the Golden Nugget before I post one. 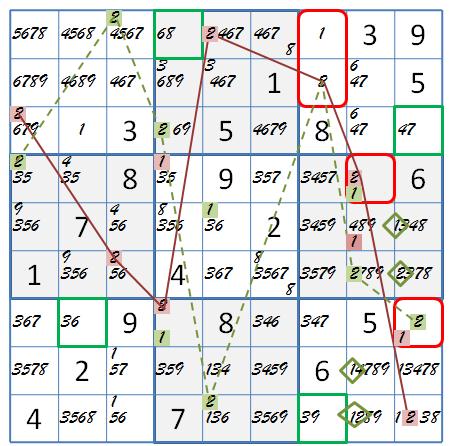 The 12r12c7 base allowed only two of the 34 2-patterns, one pink and one olive.  The pattern slice coloring trapped five candidates.

Seeing no more removals, I tried each color,  but was stuck on each.

One good thing about a complete set of trials is, if you’re stuck on one, you can come back to it after trying others.  The odds are definitely in your favor when you have five alternatives left to try. In fact, it is better to move on when stuck, but only when stuck. So I moved on to 14 in the r12c7 exocet base cells.

From the grid for the 1r1c7, 4r2c7 base solution of the last post, you can trace the marking to the contradiction of multiple 2-candidates inr6. The trial trace identifies the contradiction I found in the smallest number of inference levels.

It’s a rather advanced path to contradiction, but if you read the trace, it wasn’t that hard, taken step by step.

In the next trial, of solution 1r1c7, 7r2c7, the nice loop confirms a single 7 pattern and leaves only two  1-patterns.  The effect on our 2-pattern brigade was less dramatic, but the exocet placement of 1 and 4 clues reduced the 2-patterns from 30 to 10, 5 pink and 5 olive.  This left two 2-orphans

The SdC effect would be the removal of 3r7c7, a small skirmish victory. The trial for alternative (3+6) missing,

was lengthy,  reaching an “almost” solution.  Monsters are “almost” multiple solution puzzles. They “almost” fail to define a solution. 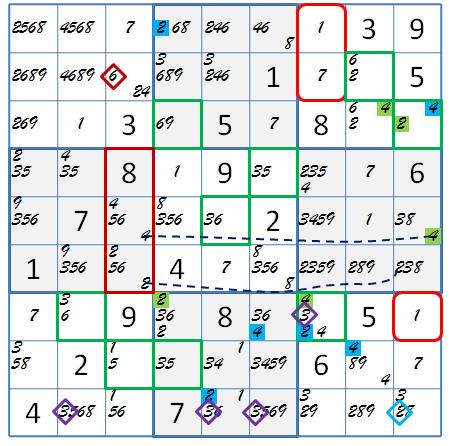 The hard won SdC produced more than expected.  Along with the boxline removals, the Sue de Coq gifts us with the bv core of a coloring cluster trapping a 2-candidate supporting many of the remaining 2-patterns! 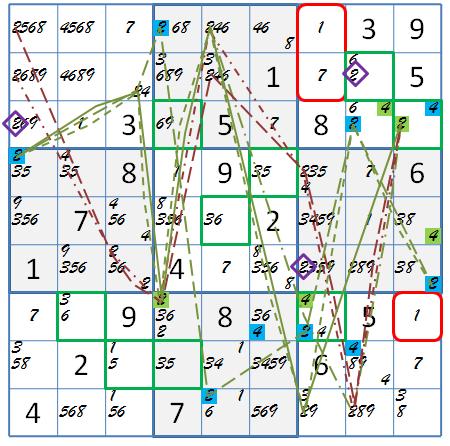 On the exocet 17 trial, we are trimmed down to two pink and three olive patterns, and three more 2-candidates have been orphaned.  But the solid, dashed and long dash olive patterns are inconsistent in the cluster coloring, and cannot be the 2 pattern, leaving 2r6c8 and 2r9c7 orphaned as well.

The three remaining patterns extend the cluster to all but two candidates. Trials reject both colors.  The blue trial leaves no 3-candidate in E, while the green trial empties r5c5.

Keep working, we have one more Tuesday to get it done!