This post reviews an  opening  salvo of eliminations on the Easter Monster.  The same attack has been reported in a several very different ways on Sudoku web sites. In the coming posts, the opening attack is analyzed, and the crippled monster is finished off in a manner already familiar to Sysudoku readers.

The Easter Monster(EM),  whose line marking I assigned to readers last post,  has inspired many web  reports, especially the unusually successful elimination of candidates immediately after basic solving.  This result is achieved in several apparently different ways, suggesting the existence of universal principles underlying all of them.  Are these approaches really equivalent, and just how much do they depend on symmetries peculiar to Easter Monster?  And what are the implications for human solving, if any?

Let’s begin with the checkpoint on EM basic solving. It’s very short, and that is not a good thing.

Hopes of an active advanced solving phase are deflated by the candidate line strings and candidate lists of this  line marking:

Here is my best explanation of the opening removals of these attacks. Rather than gifting us with a new method, it makes EM itself look very special.  I’ll follow with other versions that show more promise for general monster fighting.  Later I’ll  have an EM extreme sysudoku solving party.  I’m just not saying how much later. These things are not as easy as I’m trying to make them appear.

Easter Monster has a remarkable property relating the numbers 1, 2, 6 and 7.  Each of the four corner boxes contains two clues from this set.  These clues are arranged to avoid lines r2, c8, r8 and r8. I’ll call them “free lines”.  Each box has two free lines intersecting it. 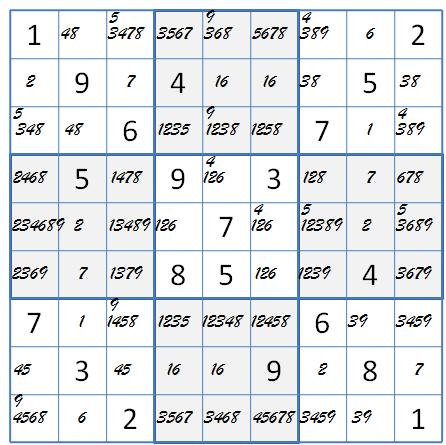 Can this happen?  Perhaps, but in only two ways.  Here is a trial for one way, but it reaches a contradiction in r5.

Maybe you’d like to join in and distribute the 1267 cells the other unbalanced way.

These trials make the case that each box must supply one solution cell to each intersecting line, and that a free line gets two solution cells from the corner boxes on each end.  Hmmmm.

I hear glass shattering.  How about you supply the diamond boxes for the removals on the next post?  You can check it next week, or google Easter Monster if you can’t wait.

I just want to point out that my removal argument was based entirely on the remarkable distribution of 1267 given clues. Aside from looking carefully at your monster before you begin, there’s no further solving insight to be gained from this explanation.

Now with the facts of the 1267 distributions firmly in mind, let’s examine a related justification of the 13 removals, made by fellow Ohioan Steve in The Easter Monster – an Opening Volley, in November 2007.  I just discovered Steve via the EM.  Impressed with his work, I hope he is the Steve Kurzhal  to which the forums attribute the EM opening attack, calling it the SK loop.   I’m sure a knowledgeable reader will inform me.

Anyway, in this article Steve cites the same facts, but bases his argument on counting “truths”.  These are not the truths of SudokuOne’s general logic.  They are the “solution cells” of my account above.

Counting solution cells is elegant, but in this case, not quite enough.

Next week, we look at another SK interpretation from – I kid you not – “Sudoku Snake” .  You can look ahead at www.sudokusnake.com/nakeddoubleloop.php if you like.