This time we review the implications of Sudoku Snake’s naked double loop attack on Easter Monster. It is posed as an independent method of attack, i.e. one that is not dependent of the EM distribution of given clues.  But is it really?

Snake makes no mention of the distribution of 1267 given clues in Easter Monster.  Instead, he  describes a loop of  connected chutes, and names it the Naked Double Loop. A chute is an intersection of a box and a line. Each chute  contains candidates of exactly four numbers.  Chutes are connected by two numbers they have in common.

To paraphrase the Snake’s trace of the EM example: 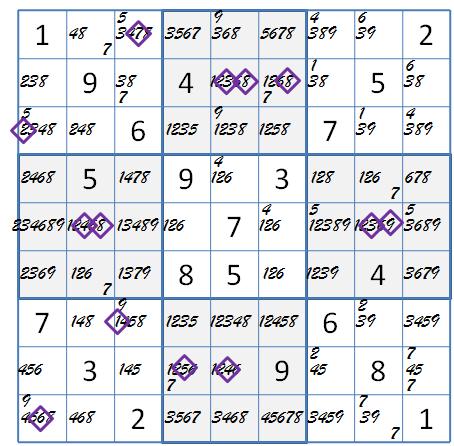 I’m also skeptical of the Snake’s proof of the elimination rule. My readers know the Sue de Coq very well, and may prefer this proof:  Since the loop chutes contain exactly four connecting values, they are Sue de Coq chutes with no alternatives missing. The identical alternatives in two “married” SdC chutes in living in the same unit share the connecting numbers, denying them to any other cells of the unit. For example, in the NW box we have NWr2= 9(2+7)(3+8) and NWc2 = 9(2+7)(4+8).  In r2 there is NEr2 = (1+6)(3+8).  In NW, the corner outside corner boxes are denied 2 and7.  And in r2, middle cells are denied 3 and 8.  The naked double loop is an oligarchy of married Sue de Coqs and they have cornered the market. In your bv scan, look out for married Sue de Coq chutes.  I’ve seen them in lines. They could possibly lead you to a naked double loop, aka SK loop, aka opening volley.