Unable to merge the corner clusters of the Easter Monster left by the opening volley, the previous post put four possible cluster merges on the trial docket, working from the solving grid of post 3/18/14. This post disposes of two, and makes progress on a third, bringing it to a critical point.

As announced, we begin with a trial of the red to grey, orange to maroon merge whose patterns leave ten orphan candidates.
In the West box, two of the orphans anoint a 2-candidate, rejecting green. The others start an expansion of the merged red/orange cluster. 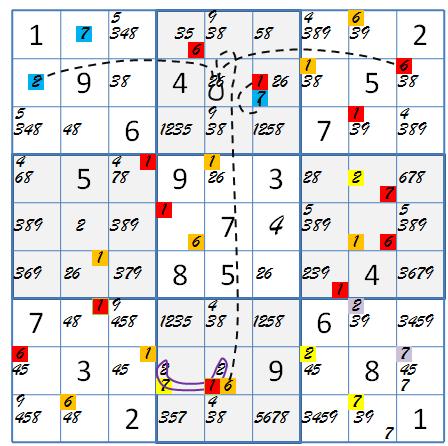 But the case is settled before lunch as blue contradicts both red and orange in the expanded red/orange cluster. It’s red-to-maroon, orange-to-grey. 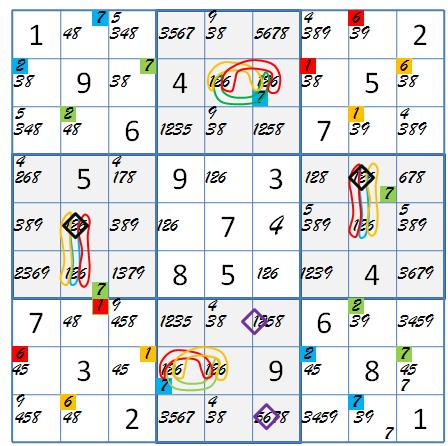 The confirmed red&maroon / orange&grey cluster aids our next trial of blue-to-yellow patterns. The confirmation of blue 2r6c2 traps 1 and 6 in that cell. The 1 removal destroys the dotted and short dash orange-to-grey patterns, making 1r7c6 an orphan. The 6 removal destroys the dashed red-to maroon pattern, making 6r9c6 an orphan. The LPO snipers are at work as we advance.

The monster’s shield develops a worrisome crack as the blue/yellow witness stumbles. The new blue 2r5c8 and 2r6c2 add a slink and trap 2r8c4 and 2r6c6.

The blue-to-yellow alibi commits the monster further as 2r8c4 removal traps 2r2c5, and 16r2c6, which leaves only one orange 1-pattern, dashed, and one red 1-pattern, solid. The 6r2c6 removal leaves only the dot-dash red 6-pattern. The added 1’s trap more of their buds, and red/orange grows. 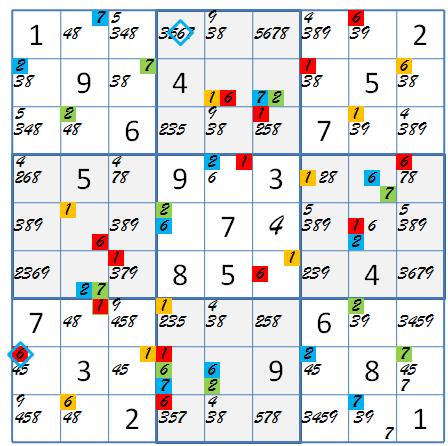 Bridging fails, but there is a wrap: !(blue & red) => green or orange but nobody is looking. But then blue/green traps red and commits the monster to orange in its blue-to-yellow story.

The isolation of the 1267 shell and the hidden inner core of the other numbers is in evidence here. The choice of blue or green simply shifts the same bv around, requiring an advanced attack on each inner core puzzle. The attack on the blue-to-yellow core begins in the next post. Your DIY version is waiting for you.

2 Responses to LPO Color Trials on the Easter Monster