An Easter Monster Alibi Holds Up

This post carries out the blue/green color trials to confirm or deny the blue-to-yellow cluster merge in the Easter Monster. 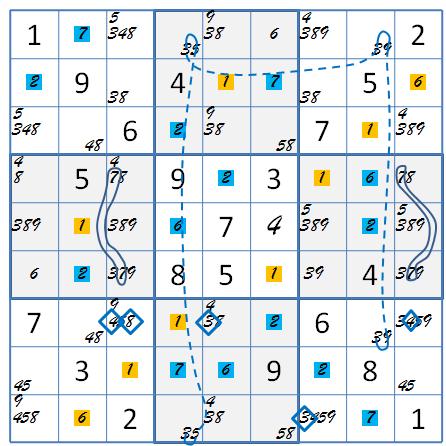 The blue-to-yellow trial has reached a point where the shell testimony of 1, 2, 6 and 7 is pinned down. The inner core attack begins with the blue trial, featuring this almost nice loop. 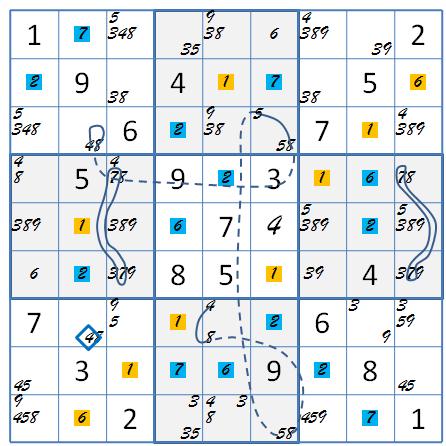 The removal leads to a contradiction that dooms blue candidates of a possible yellow to blue merge.

Both the entire trial trace and a diagram of the inference path from removal to contradiction is below. It takes a lot of patience to follow it in either form, but it took no special insight to generate the trial trace, and then the diagram from the trace. 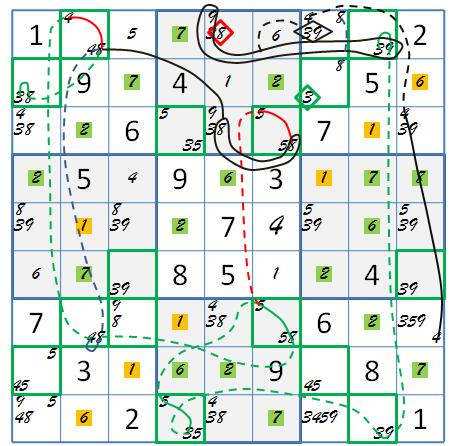 The blue-to-yellow green color trial is very similar, more evidence of the shell/core isolation of EM. You just have to do everything twice.

This time, the red ANL forces NW8, and the green ANL forces both SW4 and SE4 in r7.

The trials end with blue-to-yellow implying not blue and not green. A hung jury and the Easter Monster walks. But not far. 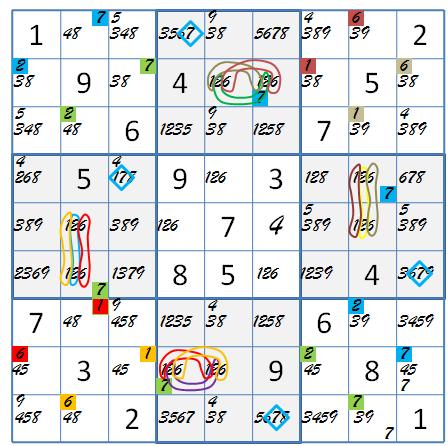 Finally, we have the goods to confront the EM, Perry Mason style. It’s down to blue-to-purple and green to yellow, red-to-maroon and orange-to-grey.

Already 7-patterns are trapped down to two, one blue and one green. The solution takes no more than what we have already done with EM, so go for it. And be sure to tune in next week for the final court room scene.

I'm John Welch, a retired engineering professor, father of 3 wonderful daughters and granddad to 7 fabulous grandchildren. Sudoku analysis and illustration is a great hobby and a healthy mental challenge.
View all posts by Sudent →
This entry was posted in Monster. Bookmark the permalink.