This post begins a review of a web article by Bob Hanson and Dave Marans posted in March of 2008, entitled Solution of the Easter Monster Puzzle: Formal Logic and Number Pair Chains. The puzzle contains an SK loop, but instead, the article outlines a series of trials to discover the clues of the opening volley. Here we checkpoint readers on the basic solving, as we discover that the article’s opening attack is more organized that it appears.

Before I looked, I thought this Easter Monster was the Easter Monster we just solved. On the New Players forum, Spring-999 claims this one, which I’m calling the HMEM, is a morph by Hanson of the original Easter Monster(the EM), but one that was taken for the EM prior to Steve K’s “opening volley” analysis. Hanson and Marans make no mention of the SK loop in this puzzle, which 999 asserts that “everybody knows”. Did you find it? I’ll cover it next post. The article has an entirely different trials strategy to make the same “opening volley” removals. 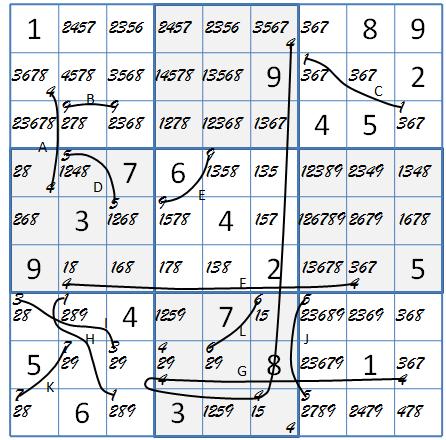 Hopefully, you persisted through line marking to get the array of candidates. Hanson and Marans (HM) highlight all the slinks, and call immediate attention to the pattern of 3-candidate cells, with lines of cells in c1, c6, r6 and r8 containing the same two numbers. They don’t mention alignment of the given clues of 3 and 9 in W and S, and 4 and 6 in C and SW, a signature of an SK loop. Kurzhal’s Opening Volley on EM was posted several months earlier.

H&M characterize the slinks as short X-chains, and declare an intention to link these to form longer “Medusa strong chains”. I take “Medusa” to mean mixed number chains, as in Medusa coloring. 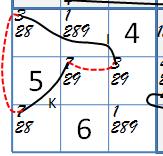 Starting in the SW box with slinks

I and K, HM note that the slinks can be linked in only two ways. Either one of 3 or 7 is true in each chute, with the slink loop at stage left, or both are true in one chute and missing from the other, as on stage right. They call upon a two- trial form of color cluster bridging logic to map a strategy determining which. I can express it in more familiar terms this way: I put SWc1 = 357 (or SWr8 = 573) on trial. If true, I get many clues, as in a failed SdC verification. If false then I know that 3 and 7 in c1 are not both true, and this means that either a strong link exists between them, or they are both missing from SWc1 (SWr8). I can test the other alignment option, SWr8 = 573 (SWc1 = 357), to find out. If it is true, I get many clues and I know that 3 and 7 were missing from SWc1(SWr8). If it is false, I have extended the two slinks into a slink loop of four links.

Here is the 2-D the trial trace. Two 6’s are forced into r4, but I thought a graphic display of the route to this contradiction would be nice for the blog. That was a very lucky thought.

Look at this. As I draw out the trace, inferences propagate from SWc1 by turning on a naked pair in the same box, which turns on clues in the next box, which turn on a naked pair in the same box, etc. In fact the inferences go all the way around in a type of “nice loop”. It functions like the SK or naked double loop of EM, except that it’s false, forcing two 6’s into r3. That’s not nice! It’s a double nasty loop.

Along with SWr1, the loop now disproves S468, C372 and W946! Note that the same contradiction serves in the proof of all links.

After describing one route around the loop that establishes one slink H & M make the unsettling comment that “the same analysis in the other three blocks [boxes] … proves valuable”.   Are they pretending not to notice the double nasty loop?

Given this success, I’m definitely using the same kind of trial for step 2, the “not both false” trial. We just shift over to the slink partner candidates, and this time, I don’t need the trace. 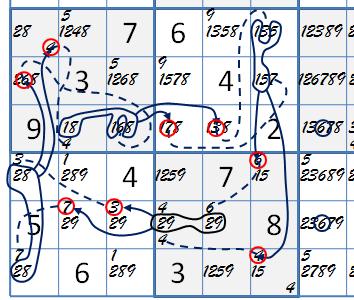 All the trials are done, and we have four slink loops. Who woulda thunk it?

Can you draw them up? And decide what to do with them? I’m on it next post.

Hanson and Barans declare it an “unprecedented finding” that a slink chain of differently numbered candidates can be created by forging slinks by pairs of “both true” and “both false” trials. Actually you knew that already. It’s just not something you would normally want to try, especially on a monster puzzle. Sysudokies are aware that monsters generally make trials long, tedious, and indecisive, as we may yet see here. But let’s go where this leads.

Next, we’ll also take a side trip from the H&M article to examine the HMEM SK Loop, or as the Snake would say, the HMEM Naked Double Loop.