Building a Cluster in the HM Easter Monster

The solving of HMEM continues, as the two slink loops on numbers 3 and 7are strongly linked to form a Medusa coloring cluster, based on Hanson and Barans’ slink confirming trials. I believe this strategy is flawed, but will follow it in this case as a challenge for methods introduced here. 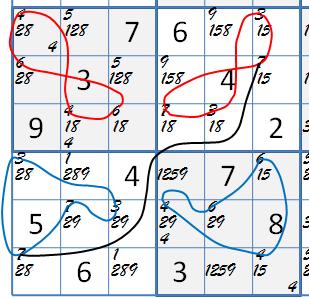 The first candidates Hanson and Barans pick for a trial are 7r9c1 and 7r5c6. The plan is the HM “unprecedented finding”. We test for both ends of the slink true, and then for their slink partners to be both true, which will mean they are both false. If both tests fail, we can declare these candidates to be strongly linked.

But why 7r9c1 and 7r5c6? The problem with this strategy is that if either test continues without a contradiction, the puzzle is solved, and we were wrong, but 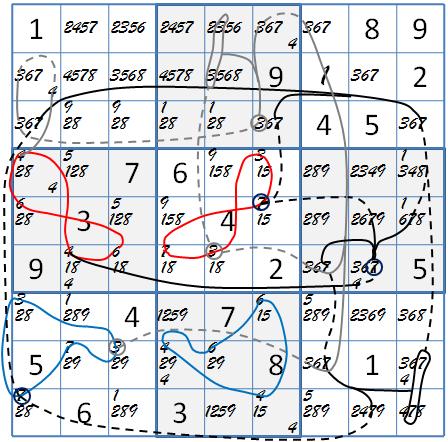 lucky. There is no scenario in which a failed trial will confirm the other match for the slink. It’s try the right pair or else. If either trial is indecisive, we have proved nothing.

Nevertheless, we continue with Hanson and Barans. Next is the trial that the selected 7’s (black circles), and the 3’s synchronized with them (grey circles) are not both true. Of course we actually test what happens when they are both true, because more “what” happens in that trial.

For all of what happens, do the 2-D trace. The diagram only shows the least inference path revealing a disagreement between black and grey on W4. 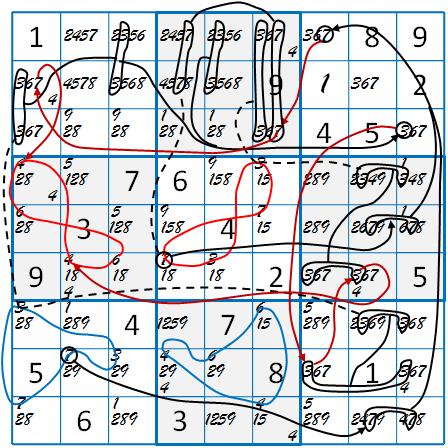 H & M must have used different routing, because they seem to report that their “not both false” trial is identical to their “not both true” trial. Saying that two candidates conspire to generate a specific contradiction is not specific enough to tell. Anyway, here’s mine.

Fortunately, the two trials fail with a reasonable effort, and establish a slink between 7r1c9 and 7r5c6. That puts them in opposing colors.

So if you’d like to forge ahead, start a blue/green cluster with 7r9c1 being blue, and look for expansions and traps. You can dispense with the 3/7 loops, because that information is fully registered in the cluster. Next time we’ll link the 4/6 loops in our own way, being careful to use the candidates selected by Hanson and Marans.