This post finishes the HM Easter Monster with Sue de Coq, X-chain ANL, coloring trials, and a remote pair. It ends with a summary of the Hanson and Marans review 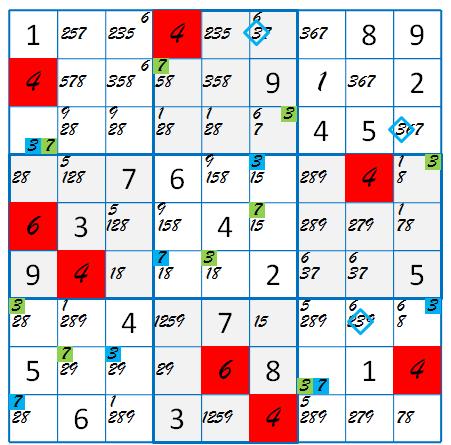 In the last post, trials of blue and green wrapped orange, and we now know the red candidates are true. I’m going to big red clue numbers, because this is no longer on trial.

Two very ordinary advanced techniques have a say, a 3-chain and an easy swordfish.

That is one fancy color trap! It turns 7r5c9 blue, trapping 7r3c9 in the ordinary way. From there, blue/green expands by seven traps!

The SdC removes 28r4c2. As it turns out, this removal really simplifies the blue color trial coming up. A bonus is that 5r4c5 can also be removed. If true, it reaches the same contradiction. 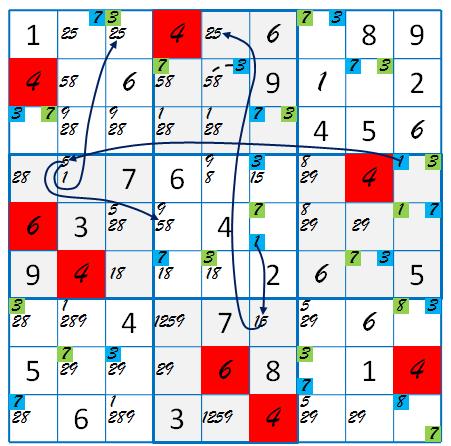 The blue trial is very simple. Three blue candidates and four forcing chains confirm two 5’s in r1. So the green candidates join the red ones as clues.

As you might expect, the EM Monster shows some resistance even here. The regular 2-D trace dies, and we look for an opening for a final blow.

Not hard. There is a long series of 29 bv and a quite evident and adequate remote pair to finish it.

There has been a surprising amount of discovery in our review of Hanson and Marans web article on HM Easter Monster. I applied Steve K’s reasoning to another form of the EM.

For everyone, there is an interesting contrast in extreme methods between the HM strong link chains with the undisclosed ALS pair eliminations, and the Sysudoku pattern analysis with advanced Sue de Coq and Medusa coloring. Finally, in the wrap up trials, there were new forms of color trap via forcing chains and pattern analysis. Although our solution followed the plan of the Hanson and Marans attack, it was not endorsed as a human campaign strategy against monsters.

After three – or perhaps you count only two – monsters, let’s take a break, and go to school. We’re going to take class with Bob Hanson, one of the authors of the web paper just reviewed. Maybe we’ll learn more about Almost Locked Sets.