left over hidden single N5 shows up where expected. No doubt you found the eliminations for 1: NWm => NEm at the very beginning of box marking, and 9: Wm => Cm at the very end. Except that 6: Nm => C6 had intervened to make it 9:Wm =>C9.

Having seen the completion grid of the last post, students of human engineering can dig the relatively small number of candidates on the grid at any one time.

But computer solving is different. A horde of candidates is no distraction for Student Assistant.

There was one more naked pair in box marking. SWr8np27. 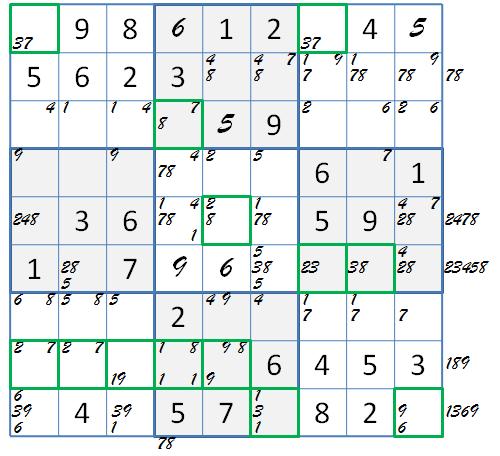 with 7 lines of five free cells before the collapse.

A hidden single appeared on the grid. You might look at how it arises in Hanson’s marking.

Two naked triples come up in columns 2 and 7, 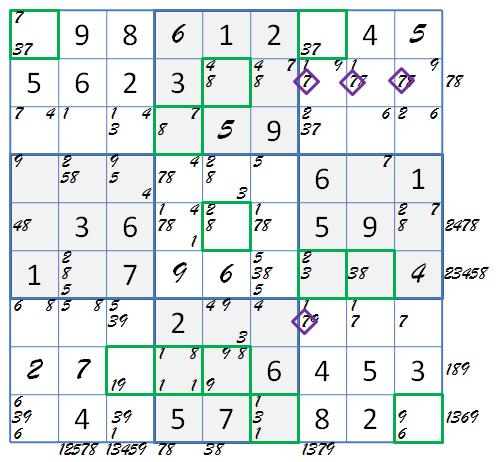 the latter triggering an interesting boxline leading to the collapse.

The challenge of the collapse is that it occurs with five lines unfilled. Be very careful to mark bv and convert eliminations to clues only on marked lines. It is low hanging fruit, but there are briars.

In case you want to retrace your steps, I include the 2-D trace of the last long leg of the collapse, picking up on the left where the previous trace ended on the right.

Next time we continue the review by attending professor Hanson’s class on locked sets. Don’t be late!