Here we begin a series of reviews that are a clinic on Sysdudoku basic solving skills. Each collection of the survey will be introduced, with several puzzles checkpointed by 2-D traces. This post introduces the Nikoli Publishing top toughy, the “Very Difficult” section of X-treme Sudoku, published in the United States by Workman Publishing.

But don’t read it to mean Nikoli created the game. Read “creators of the game” as “makers of puzzles”. Peter Gordon in his 2006 Mensa Guide to Solving Sudoku, details how Nikoli named the game, and where it was born in the United States in 1979. I’ll be reviewing Gordon’s guiding instruction in this book, as supported by Frank Longo puzzles, starting in December. Of course, the clinic is based on the beginner’s page and early, basic solving posts of this blog

Your homework puzzle, the X-treme 180, starts box marking very aggressively, showing how the immediate follow up of completed chutes and squares pays off.

In this series, I am leaving each effect clue in candidate size font until it has a turn as a cause. The final number of unused effects is a measure of the difficulty of the puzzle. The more, the easier.

If you missed some of the low hanging fruit, you can follow the trace to improve your marking technique. New readers can find directions for reading a 2-D trace on the trace page(link above). Also, this is a good time for a reminder that my email for requesting ©PowerPoint box marking grid template is on the tools page(another link above), along with detailed help. It’s a good way to save your solving states for later review or sharing. And it’s so easy.

If you had to upgrade your fruit picker after that checkpoint, try out your new version on box marking 2: through 7: before looking at the checkpoint below.

X-treme 180 is one of 10 X-tremes preselected for the review. I started with 165 and selected every 15th puzzle, reaching 300. The survey results are tabulated a bit differently than previously reviewed collections(Find It above), because in this basic series, advanced methods are not needed.

X-treme 180 is one of four that collapsed (—-) in box marking. The slash notation for box marking survivors denotes marking clues/marks or locked sets. Parentheses enclose (clues,marks) over a range of scan numbers or for locked sets, such as naked(n) or hidden(h) singles(s), pairs(p) or triples(t). 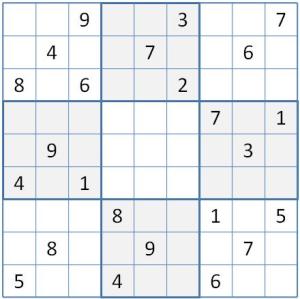 One of the reviewed X-tremes, 210, almost made it to advanced Sysudoku solving, collapsing in the close after two naked triples.  I’ll checkpoint the box marking next time

If you’ve put off learning the 2-D trace conventions, now is the time. Many readers are checkpointing their Sysudoku blog homework. For maximum basic skills, you might want to buy a copy of X-treme Sudoku, and ask for my 2-D traces of all ten puzzles as a Word file from sysudoku@gmail.com. If you don’t have it already, you can ask for the ©PowerPoint grid template at the same time.

Miss anything? Find its immediate cause in the trace below.