Cycling Blindfolded with the Guide

This post calls out Gordon Guide misguidance related to coloring, slink chains and the XY chain. AIC fundamentals are omitted in favor of ineffectual strategy and renaming of well known AIC formations. 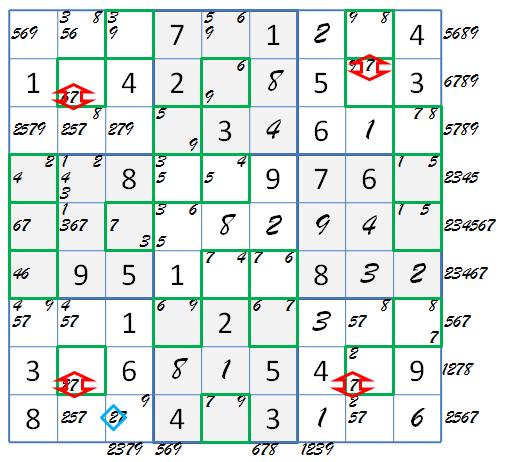 First, lets checkpoint the basic solving of the Gordon Guide Example 32, through which we meet its “nonrepetitive bilocations”.

My bypass produced only N4, and box marking was similarly anemic. That left a demanding line marking. That must have been challenging for the Gordon guided.

A 7-wing was left in place, which eventually generated a naked pair 25 in r9, and NW2.

This sets the stage for Gordon’s illustration of an AIC form he calls the nonrepetitive bilocation cycle. He calls it non repetitive, because two different numbers are members of the loop in all cells. We show the wink in each cell that makes this clearly an alternate inference chain. Its single AIC hinge is marked in the usual sysudokie way. The rest of the cycle is actually an AIC with winks connecting slinks of Gordon’s bilocation graph. Do you like my angry fish?

Gordon explains this elimination by going around the loop, which his way of making solving structures seem like procedures. He neglects to explain that the angry fish as a nice loop, making every adjacent pair of candidates a toxic set. The 57r7c1 pair is removed because the 5 and 7 see the toxic 4 and 9.

Gordon’s implied claim is that he found the angry fish with his bilocation graph. As always, he just points it out, implying that it’s quite obvious. If he showed what is actually involved, readers would have reason to complain about his Guide, rather than becoming discouraged about missing the obvious. 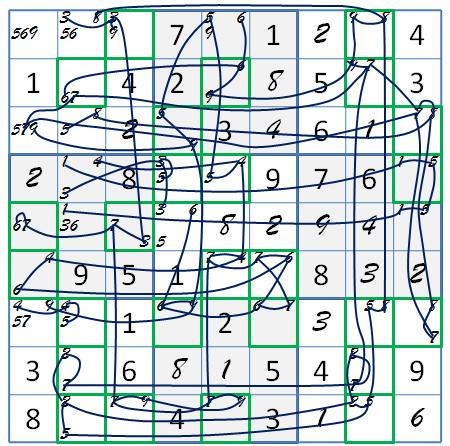 Here is the bilocation graph, which Gordon attributes to the web site of a Professor David Epstein. Take a moment . Do you see what it is? Now trace around it until you come upon the angry fish. Or don’t, if you value your sanity.

Those following this blog know that there is a much better way to represent this nest of slinks. Of course, Medusa coloring.

Unlike Gordon’s grid coloring, Medusa clusters are factual structures, not graphically supported guesses.  Coloring clusters are slink nets, organized into opposing armies, one side true, the other side false. And without the chicken scratches. 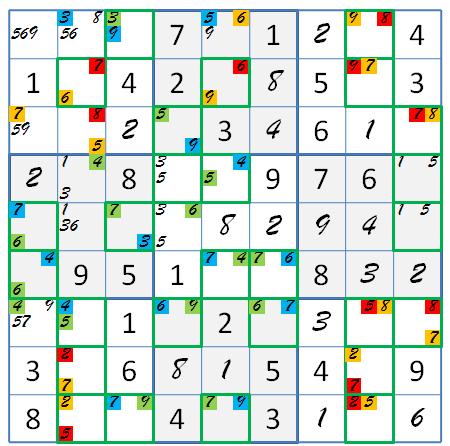 In this case, the candidates enlist in a blue/green cluster and most of those without connections to do that get into the red/orange cluster.

The green forces are proved false when two green 6’s are forced into r5. Then cell r1c5 shows that blue => not orange.

Blue and red candidates leave little else to decide.

The AIC is a fundamental concept of advanced solving, occurring constantly in many forms. The Gordon Guide conveys nothing about this important concept. Instead, in example after example, Gordon walks through the alternating strong and weak links, saying how this one is true, making that one false, making this one true, etc. That’s why those relying on the Guide may understand the turbo fish of the last post, but have no clue regarding X-chains in general, including the simple 9-chain ANL on the same grid. They also have no clue on where to start looking for another turbo fish.

In this blog, AIC were explained first as X-chains, their simplest form, followed by XY-chains, the automatically alternating and most frequently occurring form, with toxic set and nice loop eliminations working the same as X-chains. Then more rarely occurring general forms of AIC with inverted bv, mixed links and ALS nodes could be understood and constructed when needed.

In the Order of Battle, however, XY-chains come first, being more frequently occurring. They are made easy to find, even to exhaustively enumerate, by the use of a railroad diagram.

Here is a very  extensive railroad diagram from Guide Ex. 32. There are more connections to be made, but this enough to give us plenty of toxic sets to chew on. 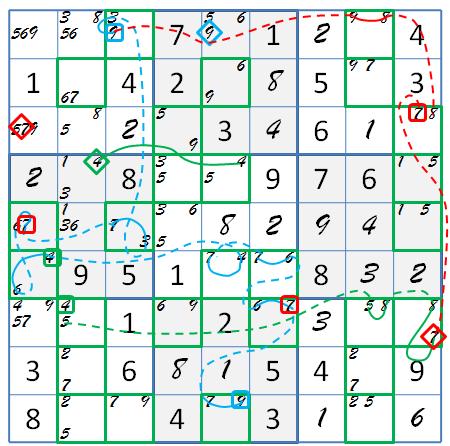 In fact, we would have found a solution to Example 32 much easier with an XY-chain, and never had to look for a nonrepetitive bilocation cycle. Every repeat of numbers along the rail marks a toxic set.

A few of the decisive eliminations along these rails make the point. 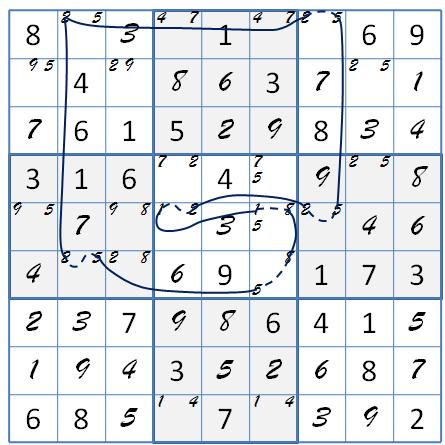 Gordon’s repetitive bilocation cycle, Example 33, has a single cell with one candidate in both slinks. The almost nice loop confirms that the candidate at the converging slinks is true.

It’s an AIC ANL, reversing the slinks and winks of an XY chain. It doesn’t actually require that the node cells be bv.

Either Peter doesn’t understand or conceals the AIC fundamentals of this example. I suspect the latter, as a means of pretending to publish methods that “experts don’t know”. I’m led to this opinion by the “Gordonian” claims which to this date Gordon seems to have escaped any censure from the Sudoku expert community. 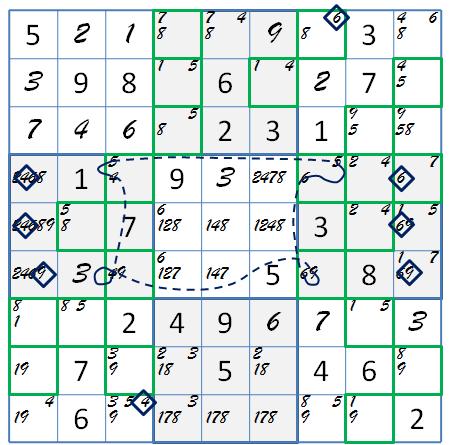 Gordon’s single example of the XY chain ends the chapter. It is not the frequently appearing ANL so prominent in Example 32 above, but the more rarely encountered nice loop. The XY ANL is a sad omission.

The last instruction chapter in the Gordon Guide is, appropriately enough, an apologetic defense of guessing. In an ridiculous final section, “To Guess Or Not To Guess” , Peter claims that Guide readers “now know everything”, and will be forced to guess only by “ridiculously hard puzzles written by someone who thinks guessing should be allowed”. This is an ironic “defense by offense” twist of logic that would make the most blatantly illusive politician proud. My respect for Frank Longo certainly dipped when I realized he had allowed his work to be promoted in the same paragraph.

Speaking of Frank Longo, whom we awarded a superlative review for his Absolutely Nasty IV collection, our next task is to review his collection of 704 puzzles composed for Peter Gordon’s Guide. The 800 puzzles claimed on the cover include the sets of 12 puzzles following up each chapter of the Guide, which are, in effect, reviewed already.

I took every 75th puzzle, starting with 100. Only two of my preselected review puzzles reached the advanced level. To get in the mood, see what you can do with the only one I’m going to analyze in detail, number 775.