This post reports a sysudokie attack on Alary’s More Extreme 84 with several highlight eliminations. A naked triple and a combination X-panel punch on the tightly linked numbers lead to a polarity ANL, color bridging and a surprising color wrap. Sounds good? 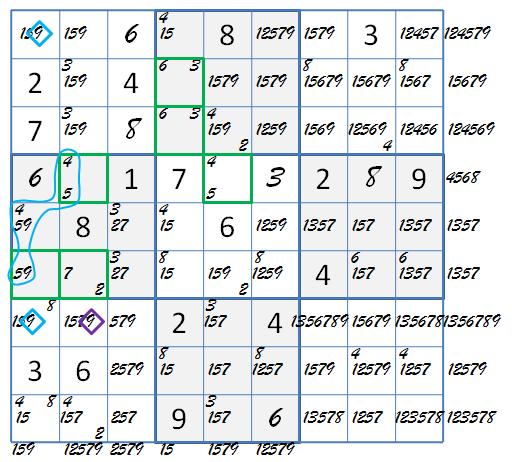 More Extreme 84 is grudging, if not downright stingy, in basic solving.

An interesting event is the naked triple 459 in the West box . It forced 9 marks before the box was marked to produce them. The c2 removal came from the 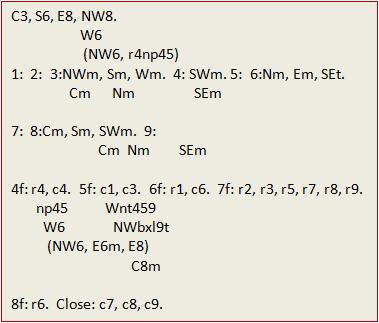 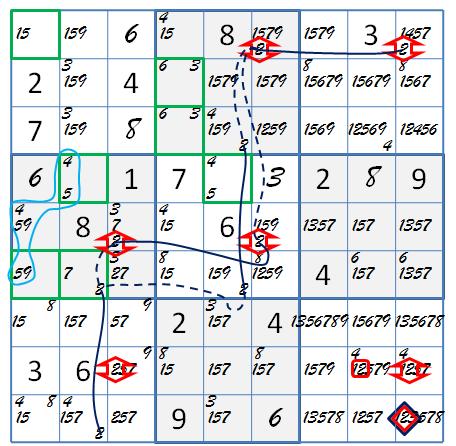 Once in a while an elimination can be credited to either of two advanced methods.

A finned swordfish and a 2-chain ANL share victims on the 2-panel. The swordfish eliminates the victim because it is in the fin box. There is even an alternate chain on the ANL. 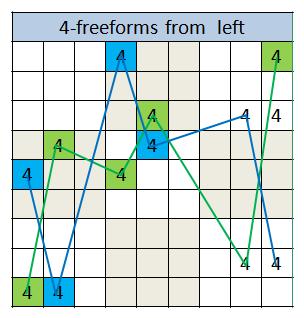 Next, the 4-panel slinks call for 4 coloring. Winks in r3 and c9 limit the cluster. One of the colors is surely true, and freeforms drawn from the left through the cluster candidates identify only one blue and one green pattern, and orphan 4r3c9, extending the cluster over all 4-candidates.

A remarkably simple and effective application of pattern analysis to coloring.

There are two ways to explain what happens next, when the AIC hinges are marked. 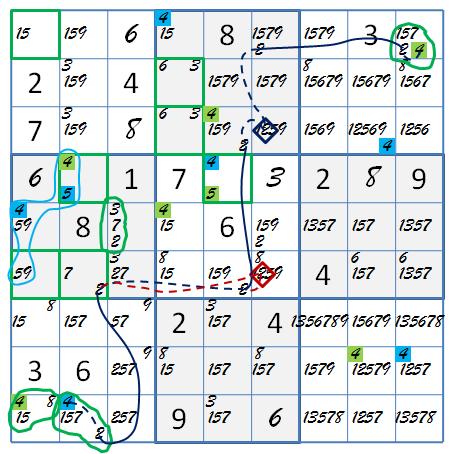 The hinges allow a blue and a green 4 to get on the 2 network. The slink between any blue and green candidates in the cluster completes the all black ANL removing cr3c6, and the red dashed ANL removing 2 r6c6. That’s my shortcut ANL.

Another interpretation is that each of the two candidates use forcing chains to see both a blue and a green candidate, one of which must be true. Since the Bob Hanson review, I’ve been calling that a polarity ANL. 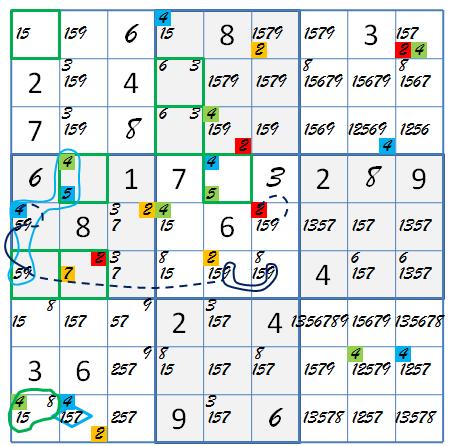 Elegant as that is, it does not solve More Extreme 84. Fortunately I have the slinks to add a red/orange cluster, and it produces some classic bridging.

not (blue and orange), implying green or red.

So its (blue and red) or (green and orange).

My trial trace finds that (blue and red) wipes out all 9s from box C. That leaves (green and orange) to wipe out this gem.It looks like More Extreme 84 was custom composed for Sysudoku. I’d sure like to know how much of this analysis Antoine anticipated when he came up with it. 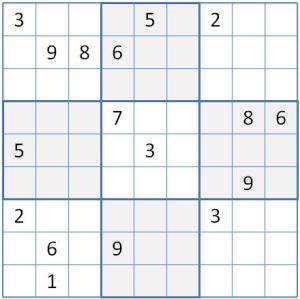 Just one more review puzzle, More Extreme 144 shown here, and then we’ll do our version of Antoine’s challenge special, #200.

I hope you have your copy and are about ready to compare some sysudokie notes with me.