This post concludes the Alary More Extreme review puzzles with More 144, Basic marking features a timely naked quad, and advanced solving is another parade of highlights. 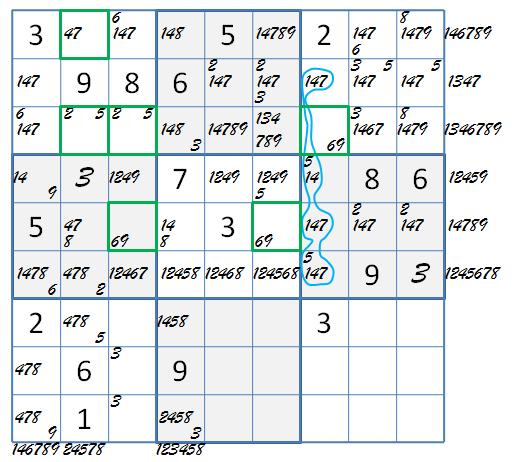 If you don’t go through it, I’d like you to see at least the naked quad along the way. Note the long fill strings, loads of candidates, and the few sparse,and therefore promising numbers. 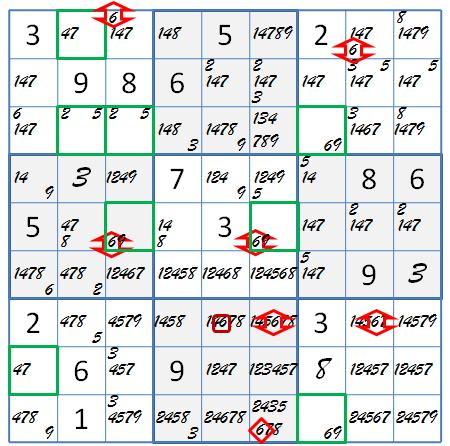 The bv scan is a bust, but the X-panel offers some promise. The 6-panel delivers a finned swordfish, with one victim in the fin box. All of the kraken victims go free.

Your challenge for the next post is to identify the kraken victims and to show how each of them escapes. A potential victim that sees the fin by any means is eaten by the fish. Forcing chain vision is necessary.

Going on through the  X-panels, a 9-swordfish deletes all candidates impeding a coloring cluster of two 9-patterns.

If you don’t see the swordfish, look for its victims now missing from the previous grid.

These patterns extend the coloring into the 6-panel. What happens then is LPO magic.

One of the two 9 patterns is true. Together, they limit the blue or the green patterns of other numbers. The limits go both ways. The partial 6-patterns allow two blue 6-patterns, and zero 6-green patterns, with freeforms from the left. It’s a pink/olive wrap, in blue and green! Green candidates, and others orphaned by the blue patterns, are eliminated. That’s nine 6-candidates gone!

The surviving grid sports a naked triple forcing 8r6c1, a fatal wound. If you care to follow it, the autopsy report is below.

It would be nice if we could can the wild claims and honor  good advanced level Sudoku books for what they are.

OK, a promise is a promise. Next time you can compare notes with me on a sysudokie solution of More Extreme 200. You have yours all ready, don’t you? If not, get the book and get busy!

And don’t forget to do your More Extreme 144 kraken homework. Virginia is in high school now, so I had to do the kraken analysis myself. Fortunately the ©Word X-panel template makes it sooo easy. Just copy the numbers in, delete the ones seen by a true victim and it’s confirmed cohorts, and see if the fin survives.