A Tracing Exercise with Wex 434

My first time through to a solution I considered Wex 434 among the most deserving of the review puzzles for the Extreme ranking. I had found a naked triple in line marking, and very subtle hidden boxline on line marking close. Then there was the verification trial of another Sue de Coq, with a removal that 434 shook off easily. Then the XY railroad delivered a 13 link XY-chain removing two candidates, allowing it to curl into a nice loop removing 3 more. Finally, a coloring cluster was extended for trial by pattern analysis.

Then, getting ready to write all this up, I went over the anemic bypass again, in case I missed something. Indeed I had, but as is often the case, a better bypass led to an even better box marking. So much better, that it came out with the solution.

First off, let’s take a look at where we are after the bypass, and the first 8 lists of box marking:

This grid is the third slide of my PowerPoint file. The first was the puzzle, with givens grouped onto the template. The second was the bypass, allowing me to check it and go a little further. Now there’s usually one slide for the box marking grid. The traces go in the slide comments window. Would you have uses for such a record of your solving experiences?

The collapse comes next, on box marking list 9. It demonstrates the value of tracing as a solving aid. The trace enforces a systematic unfolding of the collapse, saving every unfinished inference, and presenting it at the right time for you to record the effect. Nothing is overlooked.

Tracing also helps you communicate with other solvers by exchanging slides and files. Writer and reader follow the same order of events. And, as writer and reader, you can determine exactly where you went wrong when a contradiction arises. I use that advantage a lot.

Now let’s look at the stacking action as the collapse begins. Only the first cause on a list gets immediate follow up action. The remaining causes are left on a list. The lists are effectively stacked as we move down the trace, and retrieved for continuation last in , first out, order. 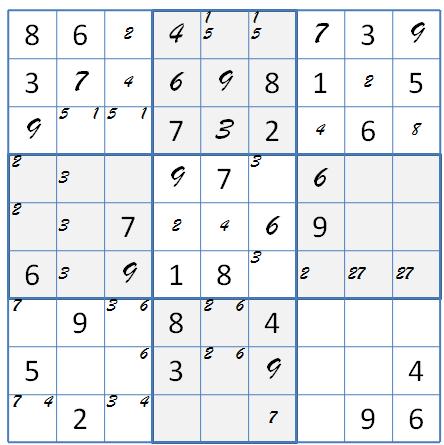 The grid at this point:

The north boxes are filled, and the only reason that Center and South boxes are not, is that effects of stacked causes are not marked yet.

We have reached the end of the depth probe, and next we move back up the trace to pull out the stacked lists as we encounter them.

We replace the NE4 pencil mark with its full size digit. On the trace,

we shove its symbol ‘NE4’ right, and list its effect E4. When all the effects generated by this list is finished, C2 is pulled to the right. As all of its effects are worked out C4 waits its turn as backup, if the bottom list runs out of steam. 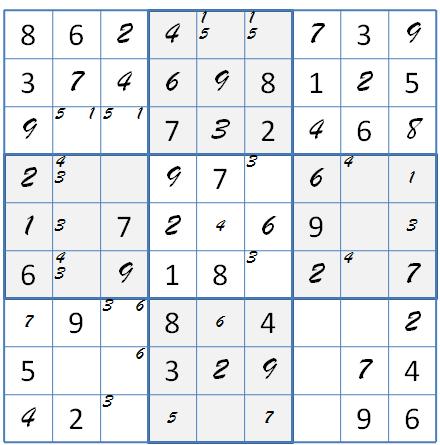 I often “assign” readers a follow up on a newly introduced topic, and in this case, that topic is the collapse of Weekly Extreme 434 in sysudokie box marking. Read the trace to fill the grid, and to become familiar with the Sysudoku 2-D trace conventions. Then complete the puzzle from here, with tracing. You can compare your trace with mine on the next post.

Next week, we begin the last puzzle of this review, Weekly Extreme 435.