The last review puzzle from the Weekly Extreme Competition, Wex 435, evades the Sue de Coq to give us: a precaution about grouped forcing chains in XYZ-wings, a genuinely extreme patterns trial, and an obvious form of ALS trial to invoke when the WEC deadline looms. With the Cavaliers in the NBA playoff finals this week, what else can an Akron guy name the new form of trial? 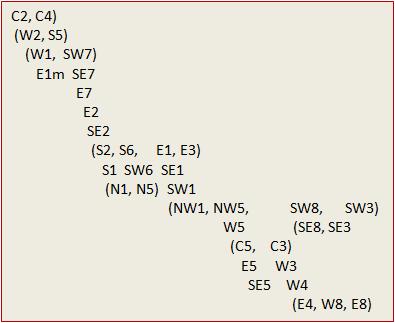 Before getting into it with Wex 435, here is the checkpoint trace finishing the collapse of Wex 434. The last run is shifted left to continue the trace.

If you are just came in, this is a continuation of the previous post and the end of a long basic trace of a Weekly Extreme Competition puzzle solved in Sysudoku box marking. 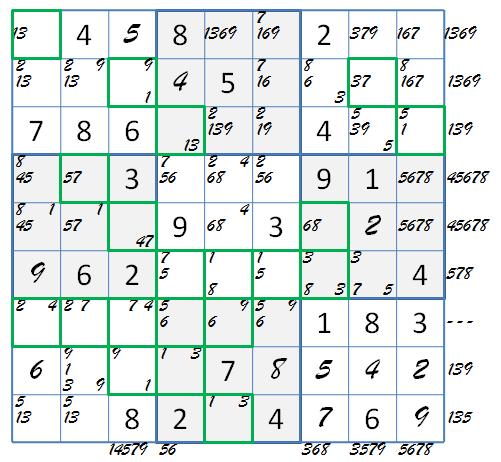 No such result for Wex 435. The basic trace follows below.

WECers, are you on to slink marking now?  Don’t you agree that this pencil marked grid is more informative than any you’ve seen elsewhere? 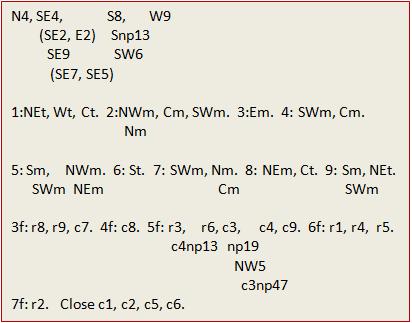 If your version of the basic grid didn’t get that far, you have something to learn from these traces of bypass, box marking and line marking:

Time out for ALS story! Since covering the toxic sets created by a pair of ALS with a restricted common, I have made very little use of them. Now I’m on the lookout for them in the bv scan, either in the conventional ALS-XZ manner, or with a mini trial, ala Gordon Fink.

Following my review of Wex 432, Gordon let me in on a beautiful example of the classic ALS-XZ that I overlooked. It comes right after line marking, where I tried a 123-wing(gold) and used the single alternate Sue de Coq (purple chute). The blue and green ALS have 2 in common, leaving their 9 candidates toxic. The new clue 7r4c7 collapses Wex 432 forthwith.

Back on Wex 435, I encountered this victimless ALS toxic set . Gordon’s forcing strategy on the Alary More Extreme 200 made me do it. I’m using this ALS pair in a mini trial. For reference I’m calling this form of trial an ALS jump ball.

The ALS in r9 and c1 in c1 are competing for the rights to the true 5 of the SW box. One contains the true 5 and the other doesn’t. The 1’s and 3’s of the two ALS are toxic sets, but it’s useless to look for a candidate seeing all candidates in either set. However, assignment of the restricted common value to one of the sets can produce a decisive trial set.

The trial assignment of 5 to r9c2 is a good example. The trial trace reveals a promising response. But there it stalls, but I have looked long and hard and the Competition deadline looms, so I press on, adding two coloring clusters. Can you identify with that?

I started with red/orange and added tan/aqua. The clusters show that Wex 435 is extremely slippery, coming close to multiple solutions.

Ready for some bridging logic? We can look at what the clusters forced into r3c8, and say that orange is true.

Then r1 reveals that orange => tan.

WECers, you know about bridging logic, don’t you?

The resulting collapse forces all 1’s from c5 and all candidates from r1c5. The r1 ALS loses and 5 goes to the c1 ALS. This doesn’t produce much, only (SW5, r9np3) in trace talk, but hey, progress has been made.

The next elimination comes on the XY railroad, with the XY chain ANL in black, or it may come on the amended 1-panel, with the 1-chain ANL in red. One more bv, but checking back on the bv maps, no fireworks.

Beyond that, I’m bogging down. But with all those bv around, I have to color it up again. It’s the most effective way to enlist the strong link network. This time, the two clusters are not speaking to each other via common numbers. Also, I’ve not found AIC extensions or successful chains, so I’m going with pattern analysis to build stronger trial set.

Make it decisive and make that Competition deadline in good logical form!

The 1-panel looks promising, containing slinks in both directions. I start the freeforms from the bottom, which allows the smallest number of starting points for freeforms. Note that placing that 5 over the 1 in rpc1 makes a big difference in that pattern.

But there’s more, The naked pair SWnp13 earned by that hard fought trial brings the 3 patterns into line with the 1 patterns in a combined pink/olive pattern analysis: 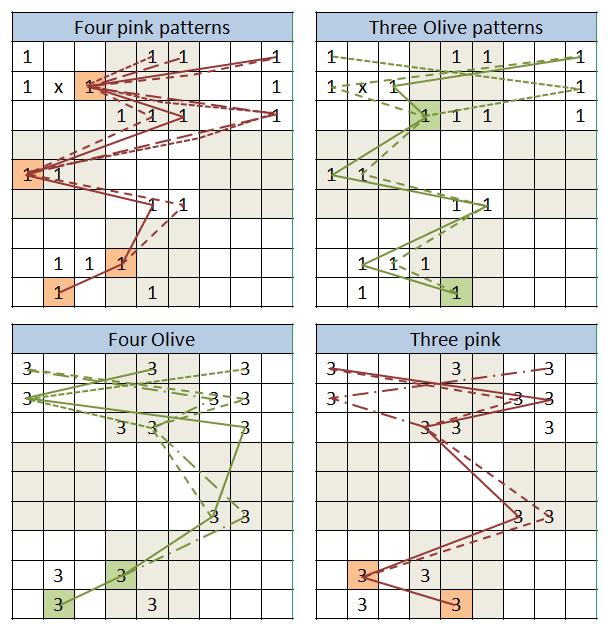 As intended, the freeforms divide the patterns into two distinct sets. One of these sets contains the true pattern; the other doesn’t. In each set, the shaded cells are in every pattern of that set. In a trial of a pattern set, the candidates not crossed by a freeform of that color can be removed. For either outcome of the trial, we will have clues and removals. Probably a decisive number of them.

There is one removal without trial. Both sets of 1 freeforms bypass r2c2. This candidate belongs to no pattern. It’s an orphan.

Did you know about the humanly practical use of patterns before this review? If so, where did you learn about them? I had to figure it out for myself, in an attempt to confirm Andrew Stuart ‘s evaluation of patterns as beyond human comprehension in his The Logic of Sudoku. Look on the Find It page to locate the posts of my experiments. At first I called it limited pattern overlay, or LPO.

Anyway, I chose the pink patterns, which will have more shaded cells, and almost as many removals, in the trial. But why should I have all the fun? Yes, WECers, there’s homework. Your assignment is to go back to the full grid, and looking at the pink freeform panels, formulate the trial and carry out as much of it as you care to. (I bet you can’t put it aside.) If you hit a stall, color your way out. I’ll have the finishing checkpoint, plus a review table and conclusions on this Weekly Extreme review series in next Tuesday’s post.