This is the final post of the Sysudoku WEC collection review. It opens with a checkpoint on the finish of a pink/olive pattern analysis and with it, Weekly Extreme Competition 435. A review table shows the features found in each of ten consecutive competition puzzles, and their points of collapse. My rating has the WEC collection somewhat less than extreme. 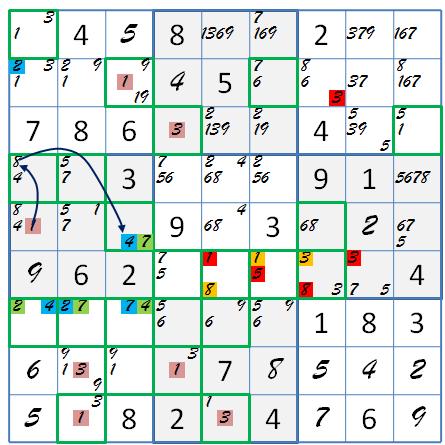 My grid setup for the pink patterns trial doesn’t include removals of the orphan and other candidates bypassed by the pink freeforms, because each of these candidates “see” a pink shaded candidate belonging to all pink patterns. They will be eliminated in the normal trial marking.

In a trace remarkably similar to the jump ball trace earlier, marking stalls.

The extension of the red/orange cluster also stalls leaving the grid below, with one trap. 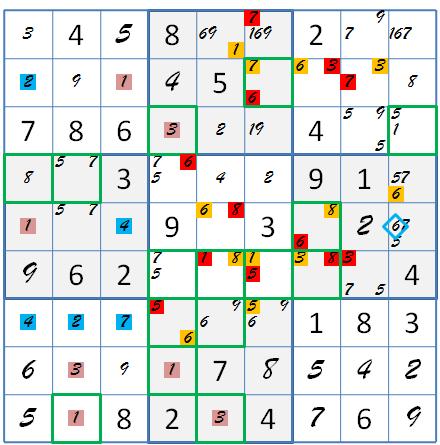 The red trial fails to provide a 1-clue for c6, and the orange marking easily reaches the solution.

I’m happy with Wex 435 as an example of the dogged effort you may have to make to truly solve a competition puzzle. At least no arbitrary guess was made. There was a logical game plan and logically constructed trials in effect the whole way.

Special thanks to the Weekly Extreme Competitors who followed these posts, and to the Akron competitor who favored me with a copy of Wex 426 at Akron’s 2014 tournament. I hope that many WECers have found something interesting to follow up on in this review. 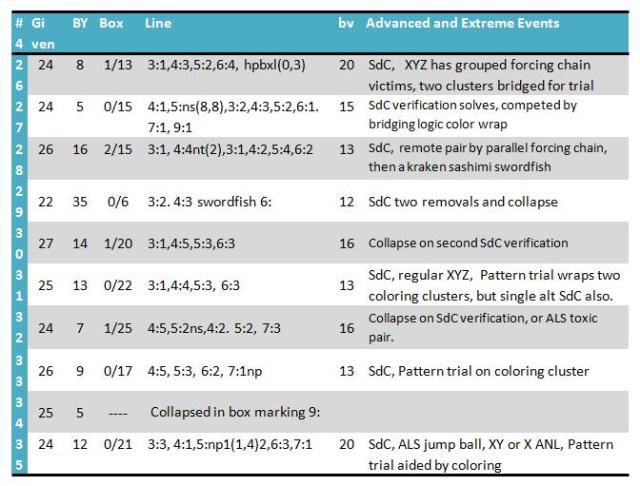 The Sysudoku blog has evolved four primary ranking categories for reviewed puzzles: basic, advanced, extreme and monster. Advanced methods are those requiring the full set of candidates. Except for Sue de Coq verification, I defer color and pattern trials until I come to believe the puzzle won’t be solved by advanced methods. Therefore such a trial means the puzzle has at least a provisional ranking of extreme. Also I consider pattern analysis, ALS enumeration and nice loop coloring as extreme methods.

With this necessarily limited sample, I have to rank the Weekly Extreme Competition review puzzles at around 40% extreme. That’s lower than I expected, but high enough to say that consistent success in the Competition, without arbitrary guessing, is a very worthy achievement in Sudoku solving.

The primary reason for the low ranking is the consistent appearance and success of the single alternative form of Sue de Coq. It may just be a statistical fluke. On the other hand, it could come from an unintended bias in puzzle composition. Whatever the reason, my Sysudoku single alternative Sue de Coq may keep you on the WEC honors list with a minimum of T & E.

I’m happy to acknowledge that the toughest puzzle of the review, Wex 435, shoved me forcibly into the a new type of trial, the “jump ball” trial between two ALS.

The review table can be compared with those of other collections reviewed on this blog. Your rating could depend on how extreme you consider the single alternative Sue de Coq. Based on theory required and difficulty of implementation, I rate the SASdC as advanced, but not extreme.

WECers visiting my blog for this review, please note also how competitors might enjoy comparing their solving experiences after solutions are published, by exchanging emails of grids and traces. The puzzles certainly deserve this type of attention.

If my ranking explanation above left you wondering what a monster is in sysudokie land, it’s a puzzle that requires some extreme measure, usually a trial, to clear a dense fog of candidates before advanced and extreme methods can even get started. 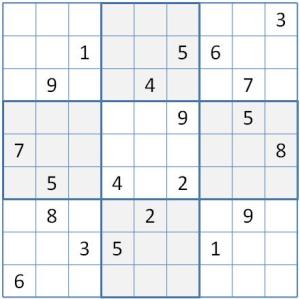 You can get to my previous experiences with monsters on the Find It page, but also just stay tuned . For 2015, I’m pinning a sysudokie target on the infamous Fata Morgana, and will begin the campaign next post with the often mentioned, but rarely detailed, exocet skirmish. Sign on by doing the basic solving on Fata Morgana and reviewing the post on Golden Nugget’s Exocet.