Here we do the Sysudoku basic solving of the celebrity monster Fata Morgana, and develop a trial plan based on its exocet. The Sysudoku interpretation of the exocet as a trial generator is reviewed and two of the three exocet trials are defined in detail. A third is left for sysudokies wishing to get close and personal with this monster.

Diligent readers might recall the relentless Sysudoku campaign of the Golden Nugget exocet. The exocet has been widely described as an elimination method, but against the GN it was a trial generator guaranteed to corral the solution. The GN had the monster trademark, an intimidating fog of candidates emerging from basic solving, blinding advanced solving methods. In GN’s case, the exocet generated a series of four closely related trials, with interchangeable forcing chains. Each trial cleared away enough fog to allow solving to a contradiction, and in one case, a solution.

Basic solving of the FM reveals another exocet. The bypass, box marking and line marking leave you in dense fog of candidates: 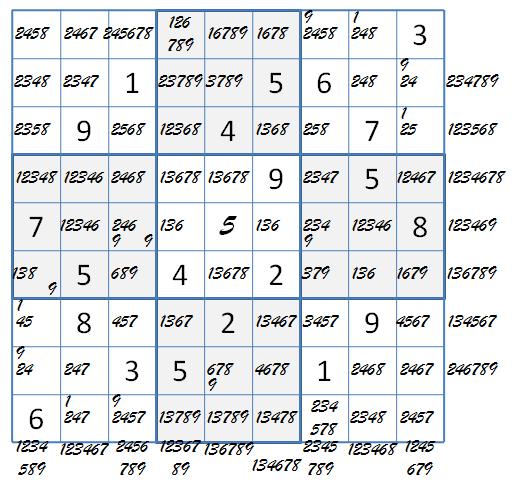 When you see this field of candidates, you know you have a monster.

Having seen the exocet mentioned in discussions of Fata Morgana, I first looked for the 4 candidate base cells and two candidate target cells similar to the GN exocet, but the ones I saw were spoiled by clues. Then I realized that the r5c46 base and the r6c8and r4c2 targets qualify as a 3-candidate exocet.

If you don’t mind a little math, this FN exocet is even better than the GN’s. In the GN exocet, there were four candidate numbers in the two base cells. That comes to 6 combinations of two numbers, or possibly 12 grids to be tested.  In the FN exocet the three candidates can form only three combinations and only six possible solutions. The critical issue is the effect that each combination has on the candidate fog.

For the GN I prepped for the 6 exocet trials by working hard on pattern analysis, and had some restricted pattern sets to help out, but it was still a lot for Sysudoku readers to wade through. But the effort convinced me, at least, that a logical solution to such a monster is humanly possible, and worthy of the attempt.

Let’s start the FM with a base solution of 1 and 3. We can hope, as in the Golden Nugget, that we can meet the exocet condition without having to designate which cell has which. Remembering the GN trials, we look for 1-chains and 3-chains between the target cells. X-chains are not as easy as XY-chains, but they glow infra-red in the monster fog.

The X-panels reveal a long-1-chain ANL c1. This prompts a look for the similar 3-chain ANL, which is just a bit harder, requiring some grouping.

But that’s OK. Chain construction, as opposed to searching, is what sysudokies do.

Remarkably, the ends of the ANL stitch together to form an AIC nice loop, eliminating 246r4c2 and 6r6c8. The target solutions are guaranteed to be 1 and 3 by the ANL forcing chains, meeting the exocet condition for base solution 13, without specifying cell locations for 1 and 3 candidates.

There are more immediate consequences of the nice loop for you to discover, and I will catch up to you in the next post, but let’s continue here with the other exocet combinations. 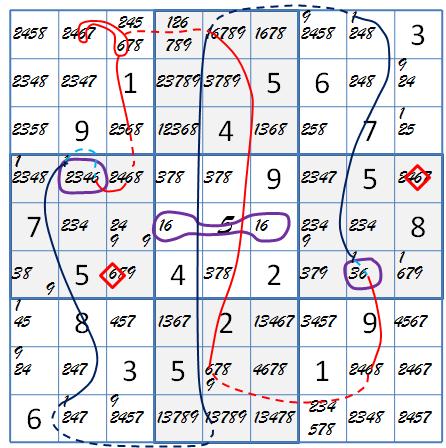 Again we leave the nice loop follow up for later, and move on to the 36 combination.

Have you been paying attention? If so, you will have no difficulty in finding a nice loop for the Cnp36 trial, to be displayed next time.

Covering the three possible exocet solution pairs will guarantee the elimination of candidates 2, 4 and 6 from the exocet target cells. That is the stated objective of the exocet elimination method. But it will also guarantee that one of the three trials can end only in a solution of Fata Morgana. That is the objective of an exocet trial generator.

Experts, please compare the logical transparency and human accessibility of this mode of solution with the others published. That is the objective of Sysudoku.