No, it isn’t a sadistic review. I’m reviewing Arnold Snyder’s Sadistic Sudoku collection of puzzles. Arnold’s solving advice, as presented in his “Sudoku Formula” books 2 and 3, will be analyzed in the following post. Two typical review puzzles are traced and illustrated.

Arnold and his publisher, Cardoza Publishing, describe his collection in Sadistic Sudoku, ©2012 as “200 extremely difficult, hair-tearing puzzles”. On the cover they are “brutally awesome . . . each one designed to sizzle your brain, frazzle your nerves”. Snyder also publishes three instructional books with puzzles, claiming to show ”never-before-published solutions … that unlock the most difficult expert-level puzzles quickly and easily”.

Naturally, such claims demand sysudokie attention. Snyder’s Sudoku Formula 3 came out in 2010, and Sadistic Sudoku, his capstone collection, in 2012. Where has it been?

Well, let’s find out what I’ve been missing. First of all, how does the Sysudokie Order of Battle protect your composure and your hair as you embark on Sadistic Sudoku? This will tell us if any of the never-before-published methods of Arnold’s are actually required. I started with number 5 and took every 20 to 185, for the following review table.

No threat to your composure or hair, but rough on Arnold’s pants, which are ablaze. One Sadistic is a victim of box marking, five more don’t get past basic. Survivors carry generous fields of bv, and are easily cut down by XY-chain almost nice loops and color wraps. Four x-wings, two unique rectangles, three naked triples, two hidden singles, and a naked single show up in line marking. The bypass stingy puzzles starting with six free cells per line may threaten a few follicles, but melt into naked triples before any hair comes out.

For illustration, let’s go through two, your homework puzzle 25, and the stingy 185. 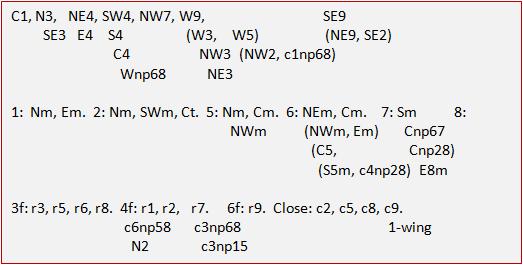 In 25, the bypass closes 17 cells by clues or naked pairs, and the 9 pattern. Box marking and line marking are not difficult.

The line marked grid shows the 1-wing and a typically generous bv field. As a matter of form I scanned for Sue de Coq and XYZ-wings, but was really pushing to draw the XY railroad and start coloring.

Here’s my railroad. It easily produces some prodigious XY-chains and toxic pairs.

Below, I found the long black ANL looking for results on an even longer nice loop. The eliminations seemed indecisive, so I continued looking along the tracks. 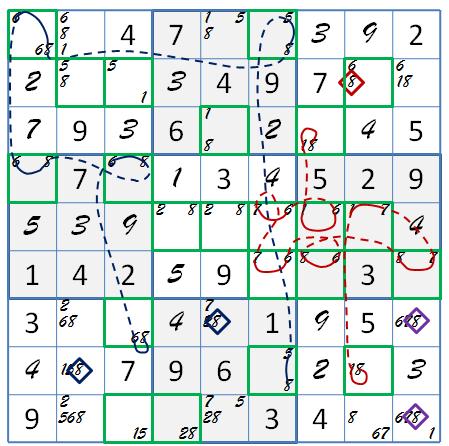 The red chain elimination leaves a clue and a boxline.

Updating the grid, I get SWnp15 and another ANL shown below. That’s two more bv.

In Sudoku Formula 3, Arnold recognizes the XY nice loop, calling it a cycle. I found no cycles on the railroad.

But apparently, Arnold missed the much more frequently occurring Almost Nice Loop, in XY-chain or other AIC form.

Or maybe he’s saving all that for the Arnold Snyder Sudoku Formula 4.

In any case, why bother updating the railroad. With such a bv field, the crayons leap out of the box themselves.

In our blue/green cluster, there is a double trap in the South Box, but it’s a game over home run when two greens compute into the same cell in the North box. The blue army of new clues is overwhelming.

I’ll report on how close Arnold comes to coloring, and where he goes instead, in the next post.

For now, we’ll see what happens to stingy Sadistic 185.

After two cells are closed in the bypass, and no clues arrive in box marking, a hair tearing line marking is taking shape.

A naked triple jumps out, and it seems a little less grim. But now we have to deal with seven free cells per line. Ugly.

But if you think this is bad, try it without line marking.

I go with rows, for no good reason.  I should have seen it when 2r7c9 was removed, but 2r7c2 is now a naked single.

However, not much time is lost when it turns up in the marking of row 7.

Look at those fill strings. Its sadistic. Like a monster.

Incredibly, the marking grinds to a halt after naked triples in W and r4, and a decisive boxline Cr5.

During this marking, the unmarked row 9 let 185 off the hook again and again, leaving this line alone to finish.

But just as I formed the fill string, I noticed that S1 had confined S3 to r9c6.

This was enough to make Sadistic 185 give up.The trace to garbage time follows,

Sorry for the overly long post. Next, in more reasonable doses, is a review of Arnold Snyder’s instruction books, the Formula series. First I consider his basic solving method, as described and illustrated in Sudoku Formula 2. If you have that book, I’ll be working through puzzles 5 and 6, for comparison.