This post reviews the 54 pages of Arnold Snyder’s Sudoku Formula 3 devoted to advanced solving techniques. These are sandwiched between 35 pages that repeat his Sudoku Formula 2, and 19 pages on how to get the solution by arbitrary guessing.

In Formula 3, Arnold deals with unique rectangles, the X-wing and swordfish, and XY-chain nice loops. He leaves out Sue de Coq, APE, XYZ-wings, XY wings and XY-chain ANL, X-chains, AIC, ALS, coloring, and pattern analysis. You have to conclude that Formula 3 is woefully thin for what Snyder claims to be “the first in-depth look that shows you how to unlock the killer puzzles and get results!”. In fact, Arnold seems unaware of such fundamentals as link logic, almost nice loops, alternating inference chains, and Medusa coloring. Arnold’s endorsement of trial and error gives me no reason to expect more from the Sudoku Formula 4 Arnold promised in his introduction to Formula 3.

The best chapter in Formula 3 is on unique rectangles. Arnold credits this material to Sheldon’s Sudoku Master Class and Gordon’s Mensa Sudoku Guide. This ignores much better sources, such as Andrew Stuart’s 2006 Logic of Sudoku, and Ruud’s Sudocue website. These use the name “unique rectangle”, or UR.  Stuart’s treatment, in particular, is very thorough, going far beyond Snyder’s. Yet Formula 3 renames the UR a “slipknot”. Arnold doesn’t even go along with his model writer Peter Gordon’s Gordian Knot!

Arnold’s first and simplest “slipknot” is illustrated in his Formula 3 puzzle #1. There the UR is shown with the full complement of number scanned candidates, but I’m using it here to demonstrate that URs can show up in the Sysudoku bypass.

The bypass route to the UR is 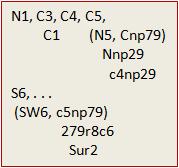 Arnold labels candidate 2r8c6 a rogue number even though it cannot be removed. 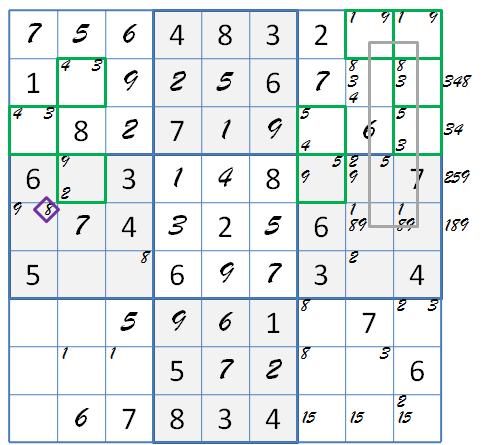 Arnold continues with the puzzle, to demonstrate a second type of unique rectangle. Going on through Sysudoku box marking, the third row of line marking takes us to it.

Arnold has an effective explanation. Since Er5 must contain 1, it can’t contain a 9 as well. This has a remarkable number of effects:

But recall, in the Snyder Order of Battle, all candidates are in place before you look for the first “slipknot”.

This type of UR is demonstrated twice more in the slipknot chapter, along with an extended unique rectangle, which Arnold renames the three-way slipknot. Google that.

Turning now to fish, Formula 3 covers X-wings and swordfish in two chapters.   Arnold has us search for them among the candidate lists, as most other Sudoku writers do. In Sysudoku, most X-wings are found in line marking, and without searching. As line slinks are identified and marked, we have only to check if an earlier marked parallel line has a line slink in the same position. The corner pencil marks help with that. If the X-wing eliminations don’t finish the puzzle, and line marking is not complete, the fish marks are left to prevent the inclusion of prohibited candidates on elimination positions in unmarked lines. Oh, but Snyder doesn’t do line slinks, only box slinks.

Snyder’s candidate lists are even less adequate for the task of finding swordfish. He describes a filtering approach for X-wings, but has no tips on swordfish.

Here is the grid for Arnold’s reader challenge to find a swordfish in Formula 3 #3.

While your patience holds out, search for one in this relatively simple candidate field.

I have left off the key numbers, since only the candidate lists are involved. And Cardoza , I also left out the typo in r3c4.

Sysudokies search for X-wings, swordfish, jellies, and X-chains, but not on the grid. Instead we use X-panels, where matching sets along parallel lines can be easily seen. 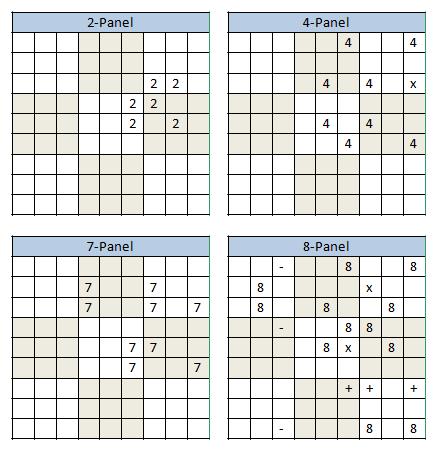 It’s so much easier when clues and other candidates are left out. The X-panels have other purposes, and the time for making them is easily justified.

I don’t show the dead 5-wing. The three lines in the 2-panel give a dead swordfish. No need to look.

The 4-panel has two 4-wings eliminating the same candidate.

The 7-panel yields no fish. Three wanna-be kraken fish, one a sashimi, fail as victim confirms fin. I looked for X-chains, but gave it up quickly.

That leaves the 8-panel. An 8-wing removes 8r5c6, but beyond that, I find three rows covering three positions, and have marked them with dashes in c3. In this blank line marking, I put pluses in unoccupied r7 to mark those positions . Then I scan the plus columns, x’ing the candidates in non fish rows.

There’s Arnold’s swordfish. It’s easy when you do it right. You might have selected the plus columns for your swordfish, removing the same candidates. That’s because the three 8 clues leave six lines for fish.

Snyder doesn’t have any of this regular fishing lore for his readers. It doesn’t help much to be shown the swordfish patterns you can’t find in a reasonable amount of time. And Virginia doesn’t understand why he leaves out finned fish and kraken analysis. Of course, I didn’t expect to see anything about the Suset algorithm fishing net.  No “first in-depth look” here.

I can’t find much good to say about Snyder’s cycle analysis chapter, either. The XY-chain is the easiest to construct among the AIC, but Arnold renames it and describes it as an isolated revelation. He describes the XY-chain as dependent on a row and column alternation, which it isn’t. Worst of all, Arnold can justify eliminations only when a nice loop is completed. Can he really be ignorant of the simple alternation arguments for almost nice loop eliminations and confirmations? If he brings out bi-value slinks, winks and AIC in Formula 4, how does he explain the omissions of Formula 3? I’m not buying another one. I’ll just browse a copy in the bookstore to find out.

Sorry, but I’m obligated to continue this for one more post. I have to call out gamesman Snyder on his ”Impossible Force”, and for his stupefying endorsement of Peter Gordon’s logically lame theory of guessing. The only useful information in it is what you can say to friends who are proud of guessing their way to a solution and are just not interested in the solving logic.

If you plan to read that post, you might like to solve the puzzle Arnold puts forward as justifying your guessing friend’s position. Its puzzle 19 from Formula 3.