This post lists the Hodoku UR techniques in a convenient reference sheet, and illustrates many of the examples in a more explicit Sysudoku format. I review Sysudoku principles for UR exploitation, and call attention to the Hodoku omission of forcing chain winks.

My review of Hodoku advanced methods begins with unique rectangles.  Hodoku compares well with the sources of my post of January 2013, The Unique Rectangle. Extended rectangles are omitted on Hodoku, but Bernhard goes further than either Andrew Stuart in The Logic of Sudoku, or the now defunct Sudocue site on UR types. I found this table useful in making comparisons.

Type 1 is too obvious to highlight, but here is Hodoku’s second example of Type 2 and your homework. Did you find it?

Hodoku illustrates the more traditional technique of completing a naked subset. The roof extras are combined into a “cell” with two other cells in c8 to form a naked triple.

A Type 3 UR from puzzle 110 is among the highlight snapshots from Sheldon’s Master Class. The post offers interesting interpretations.

Here is a simple Type 3 from the review of Frank Longo’s Absolute Nasty IV collection. In puzzle 71, the roof extras form a naked pair 35 in r6 to remove the raider 5r6c3.

Alternatively, 5r6c3 is found to remove both 3 and 5 from the UR roof, forming a deadly rectangle. Naughty, naughty.

Another often reported UR formation is the Hodoku Type 4, in which a UR candidate is slinked on the single side with extra candidates. Hodoku’s explanation becomes almost unintelligible, as Hobiger builds in the definition of a strong link without referring to it by name. This is happens because, for some reason, Bernhard only recognizes strong and weak links as components of chain techniques. It’s one of the now peculiar deficiencies Bernhard shares with mentor Paul Stephens.

Here is the first Type 4 example. Since one of the slink partners is true, it cannot be joined by the other UR partner, so both of the UR partners in the slinked cells must go. Arnold Snyder was in command of this one  in his “slipknots” treatise.

In identifying Type 5, Hodoku simply shows that it is possible for candidates to see extra guard candidates – those preventing the deadly rectangle – in diagonal corners or three corners. It’s hardly news, but if you doubt it, look at the Hodoku examples.

Hodoku’s last special UR , Type 6, occurs when there are extra candidates on the diagonal, and one of the UR partners is confined to the rectangle, as in the Hodoku first example here. Either UR candidate on the extras diagonal will force a deadly rectangle in the solution. 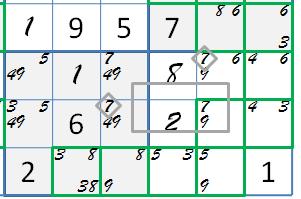 An unrecognized Type 6 UR was exploited in a different way in puzzle 120 of the Sheldon Master Class review. Following the Type 6 rules, diagonal 7’s are removed, giving two clues.

The forcing chain removals illustrate a serious omission remaining in the Hodoku and Stuart UR discussions. With the “types” for guidance, sysudokies look for guard candidates that cannot be removed, and for raiders that can remove all guards. That way, they are open to forcing chains of all types from raiders to guards.

Forcing chains are a possibility where winks are needed in any technique.

Yes, I do have a case in which a Hodoku Type fails, but a forcing chain is found to exploit the UR. It’s a Type 3 wanna be from Longo’s Absolute Nasty IV #91, where no naked subset incorporates the extra candidates 2, 3 and 5. Seeing 5r4c3 remove extra 5’s then 3’s, I went on to discover it removes the extra 2 as well. Such behavior cannot be tolerated.

To close out the list, below is one Hodoku version of Stuart’s Hidden Rectangle. with a corresponding schematic on the grid above. One corner is free of extra candidates, but one UR candidate is slinked in both directions from the opposite corner. The UR partner in the opposite corner, by removing one end of both slinks, would force the deadly rectangle.

It was a long post, but covered one of Hodoku’s best Technique pages. You might grab a copy of the Types table for reference.

The Avoidable Rectangle is the idea that guards against completing a deadly rectangle with existing clues cannot be removed, and raiders removing such guards must be removed. Spotting such opportunities without wasting too much time is the problem. Follow up after spotting isn’t.

Next I have some worthwhile observations to make on Hodoku Sue de Coq. You’ll find it on the Techniques page linked under Miscellaneous. In the order of battle, SdC is contemporaneous with UR. It deserves a better entrance on Hodoku .

I'm John Welch, a retired engineering professor, father of 3 wonderful daughters and granddad to 7 fabulous grandchildren. Sudoku analysis and illustration is a great hobby and a healthy mental challenge.
View all posts by Sudent →
This entry was posted in Expert Reviews, Hobiger and tagged avoidable UR, forcing chains, Hodoku, UR, UR Types. Bookmark the permalink.