This post examines the AIC examples from the Discontinuous Nice Loop section of Hodoku Chain and Loop techniques page. Hodoku claims to demonstrate a new type of elimination technique based on AIC loops, called AIC Discontinuous Type 2. AIC ANL are to be called AIC Discontinuous Type 1. AIC hinges are demonstrated as a primary aid for AIC construction. Type 2 is shown to be a particular form of eliminating ANL, The “Type 1” and “Type 2” designations can be dropped.

We have some truly instructive examples of AIC loops to puzzle over, but first, we have to dispose of the customary fog Hodoku throws around them. Alternate Inference Chain Type 1 starts with

“Any AIC can be seen as a combination of one or more Discontinuous Nice Loops . . .”. What can this possibly mean?

My guess is that “combination” means “superposition” and “AIC” means “AIC Type 1”, an eliminating ANL. The AIC is the terminal to terminal AIC having multiple victims seeing both terminals. Each victim forms an ANL.

“An AIC Type 1 starts and ends on a strong link for the same digit, thus proving that that digit has to be placed in one of the end cells of the AIC.”

Did Hobiger mean to say “on strong links to the same digit in two cells”, or not?

“An AIC Type 2 starts and ends on a strong link for two different digits in two cells, that see each other. This proves that the end digit can’t be in the start cell and the start digit cannot be in the end cell.”

Looks new, and makes you wonder why he left out “in two cells” in Type 1. Oh, well. The example diagrams will show what he means, if we can interpret them. 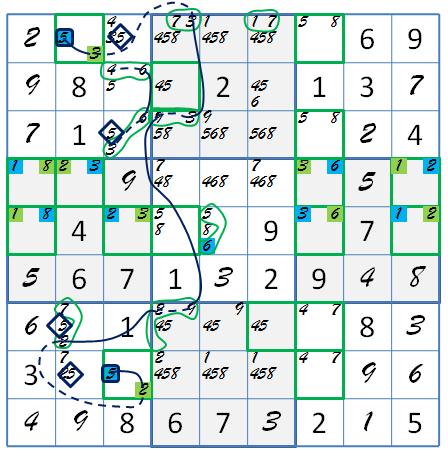 The AIC hinges guide you to this first Type 1. There were enough bv to color, and the toxic pair are both blue, but that is not a color wrap. Both chain ends can be true, but both cannot be false. Now if one of the ANL victims were blue, that would be a wrap. 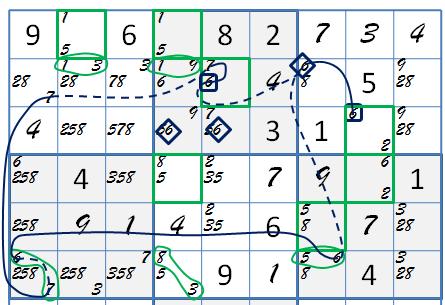 Hodoku’s second Type 1 is two X-chains with an AIC hinge between them. Two AIC hinges guide the construction, leading to two overlapping ANL with the same result. From the r6c1 hinge, if you complete the southern chain first, then three eliminations confirm 6r3c8. If you follow the northern leg from 7 first, then a single elimination 6r2c7 confirms the clue, which eliminates 6r3c45.

These Type 1 ANL are ordinary AIC ANL, so we conclude that the only reason for Type 1 is the difference with Type 2. We can conclude that Hodoku meant for the Type 1 definition to be ambiguous about one or two cells, to include confirming ANL along with eliminating ANL.

All right, let’s derive the Sysudoku puzzle state for Hodoku’s first Type 2, and see what we can make of it.

In this case, however, why not just complete the confirming ANL? It’s wicked, but it works

Hodoku’s second “Type 2” example is a cannibalistic AIC ANL. The two digits in cells that see each other are 2r7c8 and 6r6c7. Remove 2r6c7.

But it also works just as well as an AIC ANL.

So we have two Type 2 examples, that are also eliminating ANL. Is that always the case?

Let’s think outside Bernhard’s box and draw a schematic diagram of Type 2. X and Y are the terminals of an AIC, ending in cells that see each other, via a third number Z. We don’t want to know anything else. The “seeing” is Stephens’ cell seeing, i.e. containing candidates of the same number that see each other.

Now if X is in the right box, the X in the left box sees it. This allows the right X to see both ends of the terminals of the AIC slink, so it becomes the X that wasn’t there. Do the same for the Y in the right box if you’re not entirely satisfied.

Is this the only known application of cell seeing? Well, not exactly. As the right diagram confirms, if the Type 2 has any effect at all, it is also one or two superimposed ANL a.k.a Discontinuous Nice Loops. We can just forget about AIC Type 1 and Type 2. I’d rather, if you don’t mind.

Next post, we move on to nice loops. Or in Hodoku speak, Continuous Nice Loops.