This post reviews Sysudoku techniques and tools for regular and finned fish, using them to enumerate the finned fish in a Hodoku Franken fish (boxes and lines) example. The introductory Hodoku Fish page describes the highly theoretical approach coded into computer solver. Hodoku provides no practical tools or advice for human solvers.

I first encountered Hodoku in a search on “Mutant Fish”. I had introduced the subject of regular fish (X-wing, swordfish, jellyfish, . . .) by explaining removals as a kind of economics situation: If a set no n lines – rows or columns – are limited to n positions, one of the set’s candidates must occupy each of the positions, meaning that no lines outside of the set can have candidates in those positions.

I had gone on to describe when to look for such sets (Regular Fish 3/12), and how to find them (Casting for Fish), and to develop human engineered tools, both visual and algorithmic, for the tackle box. I had expanded my analogy to cover finned fish, generalized this to kraken fish, and explained the analysis for confirming victims of finned fish with fins of single cells.

So, I was less than impressed with Hodoku’s naïve chart, including the Squirmbag (n = 5), Whale (6) and Leviathan (7), and the total absence of any practical advice on spotting reasonable sizes. And further, with Hodoku’s casting the whole subject in the most general terms of the base sets and cover sets of set link theory, and with Hodoku Fish references to forum driven controversies, while omitting the fundamentals.

Nevertheless, I did find what I was looking for, and used this example of a Franken Jellyfish to illustrate what is also called a Mutant Jellyfish. Not realizing that there was an informal proof of the base/cover theorem on the page, I included my own proof (Unraveling Mutant Fish 4/12), which you might like.

In that post I concocted a X-panel template for finding mutant fish, but never got the hang of spotting them. When a friend suggested a Hodoku review, I was attracted by the prospect of taking another look at this very puzzle.

But first, let’s compare notes with Hodoku’s Hobiger on regular fish and comment further on his formidable introductory page.

Hodoku covers regular fish on a page called Basic Fish. Basic Fish examples are limited in size to Jellyfish(4 lines), while pointing out that a complementary smaller fish will exist for larger sizes. But omitted are the fundamental fact that complement fish are limited to (9 – #clues)/2. Thus if there are two clues of the number, then the swordfish is the maximum possible size. With four clues, it’s the X-wing.

The Hodoku notes on the regular (Basic) fish examples simply identify the digit and the base and cover lines, and repeat the elimination rule. Thankfully, no premise is involved. Nowhere does Hodoku offer any help on actually finding fish, although the whole purpose of the batting cage is to sharpen spotting skill. Sysudoku offers two helpful tools, the blank line tally for analysis on X-panels, and for difficult cases, the suset scratchpad algorithm. I’ll not use the Basic Fish examples to illustrate these tools. That is done more effectively with the finned fish examples. However, if fishing is unfamiliar territory for you, and you have reviewed the Sysudoku posts linked above, then making up X-panels and trying out these Sysudoku tools on the Hodoku Basic Fish examples would be very worthwhile. Look at the Tools page for a source of templates. 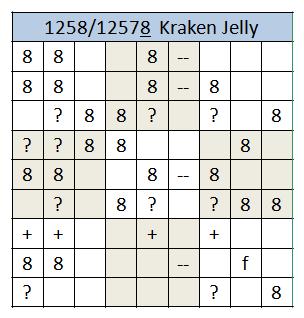 The blank line tally (Casting ) is illustrated here in the marking of the Hodoku mutant jellyfish panel above. Remarkably, the example is also populated by regular finned jellyfish. In the tally, dashes(–) in an available blank column mark base rows. Likewise, verticals(|) in a blank row mark base columns. Plus(+) marks the cover lines, the routes of eliminations. The fin cell is marked with “f”. In a regular fish, the “?”s would mark removals, but because of the fin, they are potentials only, subject to the fin box rule and kraken analysis described below.

The second tool the suset enumeration scratchpad (Casting), is handy for hard cases like this one. It is a suset list based on the code used in solvers to find locked and almost locked sets, another form of the set link problem. Applied to the x-panel, a locked set marks a fish, and an ALS, a finned fish.

“Suset” is sysudokie speak, short for a Sudoku set, a combination of base and cover sets, in this case, rows and columns. A suset is a “base/cover” combination. Suset enumeration finds every suset describing a fish or finned fish or locked set, or ALS. In the scratchpad algorithm, we write them down. Dedicated showoffs can do it mentally. But we sorely need an example, don’t we?

To illustrate, we start with cover columns for each base row in the above grid, listed by increasing covers.

Now we build larger susets by forming the union of bases and the corresponding union of covers, again going no higher than 5. When bases match covers, we’ve found a fish. Falling one base short, we have a finned fish. So turning the crank:

We stop there, because a finned jelly, an ALS with a single fin, would go no higher than 5 cover sets. Every n/(n+1) suset is a finned fish. That’s what the funny numbers are up there on the X-panel. The fin column is marked with the underline

The possible victims(?) await kraken analysis which you may want to do before I get to it on the next post. Hodoku doesn’t help. I used to say that “Virginia” did that chore for me. But actually, I was day dreaming about one of my grandchildren turning sysudokie and taking over the blog. I couldn’t make out which one. They’re all very smart.

The high point of Sysudoku suset fishing so far occurred in the review of Bob Hanson’s Sudoku Assistant. Its kraken analysis topped SA in Hanson Finned Fishing with ALS of July 2014, then routed it completely in Suset Sashimi of August. It’s one of those rare cases of man over machine. In that case, Bob Hanson’s . Go there for more excellent examples of kraken analysis.

The Hodoku Fish page ends with a some of Sudoku fish terminology. There is an interesting history of the term sashimi,.

Next post, after the checkpoint, I’ll review the Hodoku examples of finned fish, which are limited to cases in which potentials are in the same unit as the fin. Hobiger didn’t realize that going beyond this limit is the essence of kraken analysis.