This post proposes a spotting technique for Franken Fish, based on the Hodoku’s Mutant Jellyfish example cited earlier in this review. It also shows how Sysudoku fish analysis techniques apply to Franken fish. Finally it reports how pattern analysis surpasses the Franken fish of this example, and how the puzzle can be finished.

Remember Hodoku’s Mutant Jellyfish? It was the Franken Fish into which your strenuous kraken analysis workout poked holes. As Churchill might have said, ignoring Franken Fish is something up with which Sysudoku will not put! So now it’s time to return from our finned fishing haul with a close look at Hodoku’s Franken fish. The adds boxes to lines in the sysudokie tackle box. Does the blank line tally and scratchpad suset enumeration still apply? Can Franken fish actually be spotted with the naked eye (and brain)? Yes and yes. 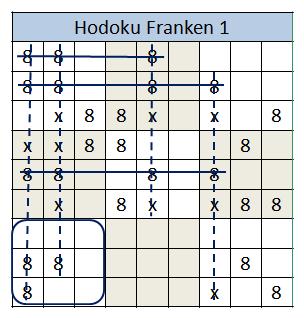 Here is that Hodoku Mutant Jellyfish, pictured on the X-panel as we have been doing the finned fish. The base set (solid lines) includes the SW box.

This case suggests a spotting rationale. Having noticed the alignment of rows 1,2 and 5 being spoiled by other rows bringing in more columns, we suddenly see the SW box as a cover unit that introduces no more columns

Generally, we want the base to enclose fewer candidates and the cover units to cover many. The SW box adds a base unit for free! 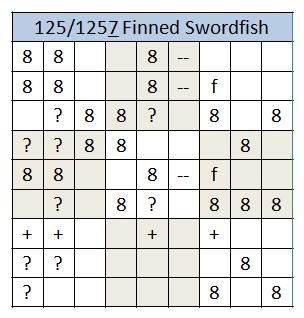 This quickly yields a multiple finned swordfish 125/1257 . Maybe you’d like to see if it has any victims, but the Franken offers us 9 cover set victims at the small cost of giving up three potential victims in the SW box to the base units.

Hodoku Franken 1 even has a suset prescription. It is 125SW/1257. With the Franken box, it’s still about row positions, i.e. columns..

I’ll have to try this strategy in collection reviews, but I think I’m onto something. 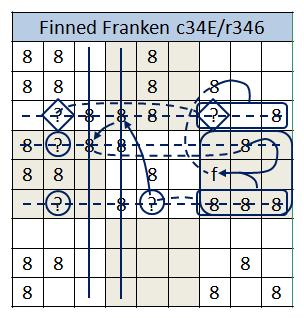 The guiding minimum cover principle applies in the second Hodoku Franken example on the same grid, though not as well, in the column direction. The minimum row count columns 3 and 4 are taken as base units, and the East box for a finned Franken swordfish. Two victims see the fin, one via a grouped forcing chain, which Hodoku misses. As they did in the homework kraken analysis, the minimum columns play a role in the forcing chains saving the other victims by confirming the fin.

Although Hobiger shows little insight into human solving, his batting cage examples have been valuable to the cause.

Patterns are another form of logical restriction remotely related to fish. Starting freeforms from the bottom up, the available patterns leave orphans duplicating the Franken eliminations, plus four more. I’ve added lines and curves in black, to illustrate how freeforms fail to complete, leaving orphans. Lines to the early orphans become dotted curves where the next choice of candidate makes the freeform impossible to complete. 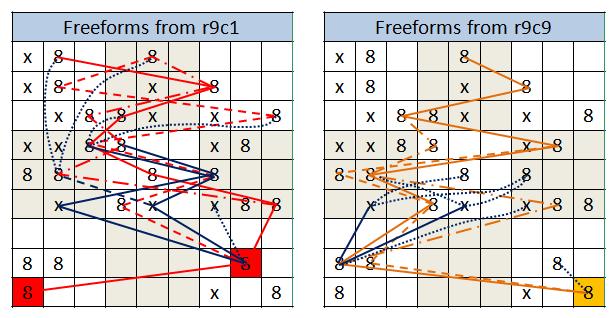 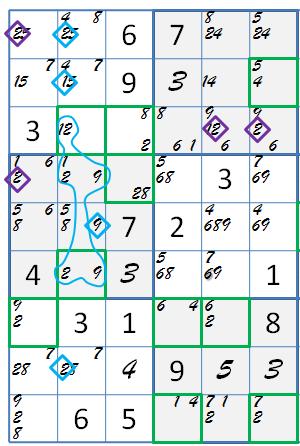 Amazingly, removing all of these orphans does not bring Hodoku’s primary Franken down. Hodoku doesn’t report solutions, so I finished the puzzle as a check to make sure I had not removed a clue. If you want to work through the Franken example from the site diagram, you’ll have to add 5r4c1, 6r6c5, and 8r9c7.

My first find, was the naked triple and SW boxline removals shown here.

From there I added two clusters and found a bridge

which eliminated 8r6c4 and expanded the blue/green cluster. 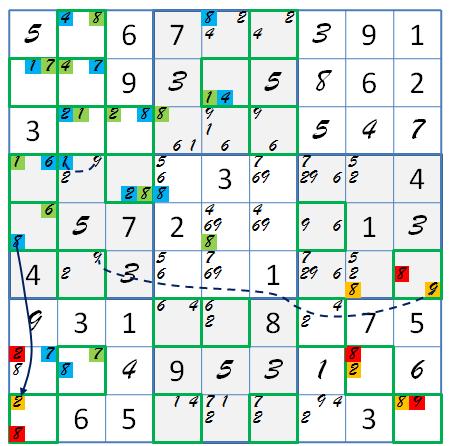 I got the solution with a color trial, blue implying orange and deleting all 9’s from c2, an Andrew Stuart Unit Forcing Chain (12/11/12) in reverse.

The solution 8-pattern is the solid red one on the left panel above. On this grid, it starts at the top in green, and finishes at the bottom in red. 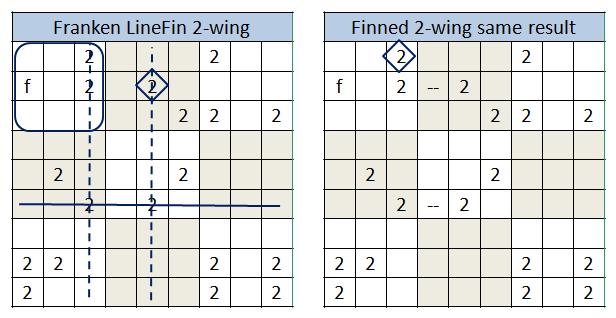 Does the Franken look familiar? A close cousin appeared in my previous post. Hmmmm.

This encounter with Hodoku dissipated my lingering dread of the Franken fish. It certainly promoted the suset enumeration tool for fish and finned fish, and my case for kraken analysis of all finned fish.

I’m pleased with the role played by freeform pattern analysis as well. On his Last Resorts page, Hodoku dismisses patterns, saying the templates (his patterns) are not meant for human players. Another pronouncement best ignored.

Happy Holidays, everyone. Next week begins the final of this Hodoku marathon review. We enter the finish line stadium with sharpened systematic tools. Now it’s time for the ALS toxic set, a.k.a ALS-XZ, kick.