For your after Christmas Sudoku fix, this post is about Hodoku’s ALS-XZ, a label favored by most writers. I prefer the term ALS toxic sets, associating the method with others by the goal of identifying a set of candidates guaranteed to include the true one. Unfortunately, the first Hodoku ALS-XZ example is compromised in a way that many Hodoku batting cage pitches are. With the given clues, there are candidates missing from the example, a crucial one in the example.

It works only if 7r1c7 is removed, as in the Hodoku diagram. But how and when did it go.

We’re on firmer ground with the second example. All candidates are present, and the ALS partners in the toxic set come from two boxes. The question that arises often with ALS toxic sets is, “How on earth did you find it?”

One answer is, just relax and be on the lookout for ALS with single cell candidates and restricted commons. I can say it, but I seldom do it.

As to enumerating all ALS toxic sets, as an almost last resort, I’m pleased to have greatly improved my technique for this  very recently. Instead of attempting to enumerate ALS first and then finding pairs to generate toxic sets, I now advise that you enumerate promising primary ALS and search for a toxic set partner for each one. This mercifully ignores the way too numerous ALS pair combinations.

The process is illustrated in the revised post, Enumerating the ALS-XZ , of 7/24/12.

In the primary ALS you want single or boxed group number for the restricted common. You favor many cells and numbers for more possible toxic sets. That may mean using the suset enumerator to flush them out.

Adjacent lines are more prevalent than the example’s aligned boxes, so I start with primary lines, working down.

9/28 no ALS partners not filling the shared unit

That gives some idea of the hordes of possibilities. It is clearly impractical to look that closely at all of them. With some practice, it may be possible to cover most of them with a reasonable scan.

For me, the technique has to stay at the back of the line, where an enumeration this extensive is justified. 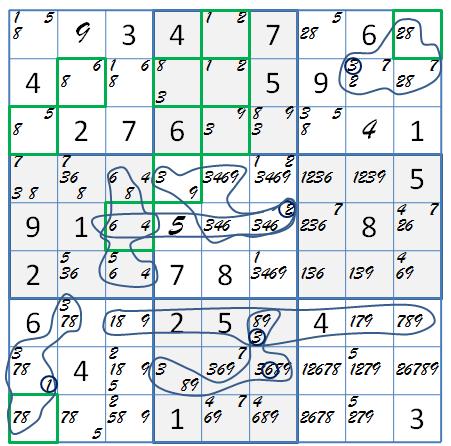 Here I’ll just suggest a few of the more promising possibilities on the way to the example pair. Candidates isolated for restricted common terminals are circled.

Next post examines Hobinger’s examples of AIC chains exclusively constructed of ALS nodes. You wouldn’t want to look for them particularly, but only to be alert for them as you construct AIC .