This post explains the Hodoku ALS wing and chain as special ALS node AIC ANL with toxic set groups defined by ALS nodes. This is how they should be constructed, so as to leave the mind’s door open for more general AIC almost nice loops with ALS grouped toxic sets.

Hodoku starts with an AIC of three ALS nodes, which he therefore insists on calling a wing. If you label a three node XY chain an XY-wing, then it’s consistent to do that. I’ll quote Hobinger’s description of the ALS wing, but how about if I throw in a diagram to go with it?

RCC here means restricted common, and the victim indeed must have a grouped link with both ALS groups. One of these groups contains the true candidate. The internal slinks between ALS groups are included in the diagram, making it clear that what we are talking about is simply an AIC with grouped terminals and a grouped almost nice loop. Been there, and done that, but not exactly in this way. Right? ALS C can’t be replaced by a single candidate, but it could be any AIC chain with a terminating commons into A and B.

The distinguishing feature is that the terminal links are groups created within ALS. These being AIC, It’s not required that all nodes of the chain be ALS, as you might gather from the Hodoku descriptions. 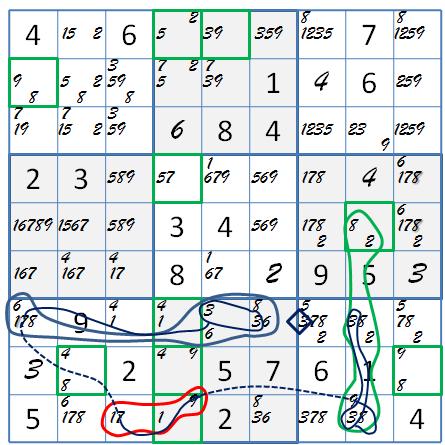 Hodoku has two “wing” examples. If you do basic solving on the first, tell me how to get to the first wing grid. I almost made it by making 4r3c6 a given, then finding a naked triple in c4 and a naked quad in c3. This still leaves the shadowed candidates. One of them, 1r6c1 compromises the example.

Does the removal of these candidates leave a solution? I checked it out and it does, but this habit of deleting candidates without explanation is an annoying feature of the Hodoku batting cage.

I outlined only the terminal groups within the ALS. The RC’s function as winks in the AIC. The ALS provide the internal slinks between groups. The toxic set is made up of the like numbered groups defined by the ALS nodes.

Contrary to Hodoku batting cage expectations, it is not practical to look for such ALS chains, as entities. Without the context of the chain already in place, the 3 groups seem unrelated. Much more likely to find are the extensions from the red ALS terminals into the bordering ALS, where the 3-groups complete a grouped ANL.

The second example is also compromised with unexplained removals. One of them, 4r2c4, is necessary for the example.

Here again, the removal would only be found by stringing ALS nodes in an AIC and noticing a pair of like numbered ALS groups for the ANL. The best solving practice is to make the chain constructions at the right time, being open to the possibility of such grouped ANL occurring. 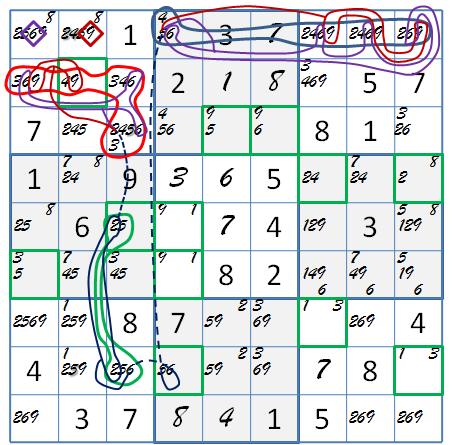 Hodoku notes that this is really two ALS chains, one generating toxic 6’s, the other toxic 9’s. It actually demonstrates a AIC with ALS grouped pincers. 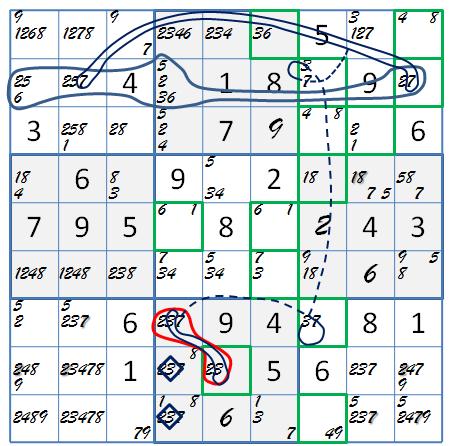 The last ALS chain example includes an XY chain, illustrating well that it only the terminal groups that distinguish ALS chains from AIC with ALS nodes. This time, the missing candidates have no effect on the example. W5 was added to the givens to get that close.

Hodoku mentions that the blue ALS and bv r2c7 are doubly linked, and a set of forum formulated rules governing a limit imposed on “adjacent” like-numbered commons in and out of an ALS in an ALS chain. I’ll have to look into that later, but the underlying AIC is certainly valid here.

Next time I’m in the AIC hunt, I’ll try to link up some ALS, and use those ALS boxing gloves at the terminals.

Happy New Year! We’ll conclude the Hodoku review with the next post, featuring the Hodoku Death Blossom examples, and general conclusions on this extensive and “ancient” site.